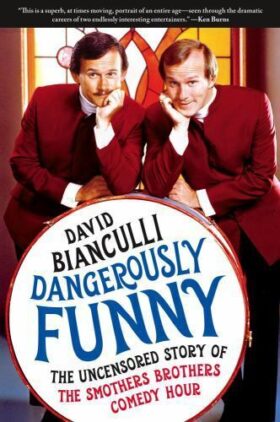 Tagline: The Uncensored Story of The Smothers Brothers Comedy Hour

Declassified by Agent Palmer: In a three network world, always be the Smothers Brothers Comedy Hour

With its humor, guest list, and high caliber of entertainment, it bridged the generation gap at a time when that gap was becoming a Grand Canyon-like chasm.

The closer you look at The Smothers Brothers Comedy Hour–season by season, show by show–the more you understand the generational, artist, and moral duels being fought in the ‘60s, and how quickly small confrontations mushroomed into all-out war on several fronts. Year to year, the shows said it all: Tom and Dick Smothers looked different, acted differently, and protested more brazenly and passionately. What they managed to say and do was important, and what they were prevented from saying and doing was no less meaningful.

“They’ve been lazy ever since they started, and they still are today.” – David Carroll

“You can make statements, political statements, with what we call humor,” Holbrook says. “But humor is often interpreted as something soft. Well, it isn’t always soft at all. And if you can use a sense of humor, you can use the ‘ignition’ function of comedy–using something funny to explode an idea that is serious and political.”

Grace Slick caught on to the brothers’ hidden counterculture sensibility right away: “They looked like just nice, next-door guys–and they weren’t. They were really tilted.”

“To put a show on the air,” Tom said at the end of the first-season finale, “it takes one hundred twenty-fize people working against each other”–and there seemed to be some ring of truth to that punch line. “It’s been a long, hard season,” Dick said to Tom as they closed out that final first-season show, “and we’re all looking forward to a little rest.”

What they did, he insisted, was unprecedented: “It was one thing to criticize the establishment when you’re just with yourself and a few friends,” he said. “But to do it on prime time and get away with it–that was an extraordinary achievement. They did it being extraordinarily honest.” [he = Pete Seeger]

“It takes over one hundred and twenty people, working strongly against each other, to get this show in the air.” (Tom)

“What they wanted to do,” Mason said of Tom and the rest of the Comedy Hour staff, “is a lot more interesting than what they got to do. What was it they wanted to get away with? It wasn’t the chance to say ‘fuck.’ It was to present an idea.”

…the biggest difference between the two shows may well be this: where Comedy Hour used Nixon as a punch line, Laugh-In let Nixon deliver the punch line.

“Laugh-In was not a variety show,” Schlatter says simply. “Laugh-In was a comedy show.” The difference between the two shows, Schlatter adds, “was that with the Smothers Brothers, you were aware of intent. We tried to not take a position as obviously as Tommy.”

“We liked them individually,” Dick says of the censors. “They just had to play the corporate game, or they didn’t have a job.” Tom agrees. But each season, the players in the game changed, and the game, and the rules, changed accordingly.

[Tom] Downer also said, more admiringly than grudgingly, “Tommy used every means at his disposal, including his great popularity and his appeal to the press, to get his way, and I don’t object to that at all. Every producer who feels strongly about his product should do that. Perhaps Tommy was more inventive than most.”

“We stand out,” Kempton quoted Tom as saying, “because nothing else is being said. We’d be moderates anywhere else.”

“Your fame gets you laughs for five minutes,” Dick says. “After that, you better be funny.”

The truth of the Smothers Brothers’ career is this: The longer they lasted, and the more they stayed true to their beliefs and styles, the more that mainstream American came to respect and even revere them, for stubbornly fighting for principles and ideas that, over time, were acknowledged as the right ones.

…crucial part of the brothers’ legacy: Pre-All in the Family, pre-Laugh In, they strove for topicality at the very time the networks were scrambling to avoid any whiff of it.

You are interested in higher education, whether material or spiritual.
Fame and fortune are coming your way.
Whoever wants to reach a distant goal must take small steps.
More Fortunes >