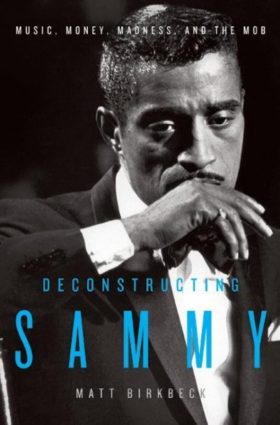 Synopsis: Deconstructing Sammy is a book by author Matt Birkbeck about the life and death of Sammy Davis, Jr. and the subsequent efforts to restore his legacy.

Declassified by Agent Palmer: Deconstructing Sammy is about more than the Resurrection of the Legacy of Sammy Davis, Jr.

The Judge always viewed racism as an obstacle he’d overcome, no matter what the cost, and anything other than remaining stoic was not an option.

Sammy Davis Jr. was an international celebrity, a cultural hero adored by white America for his talent and loathed by a generation of black America for being just another Uncle Tom, a minstrel who forgot his roots.

Everyone would see, Sammy thought, that by entertaining, he could make all the hurt feelings go away.

Sammy eventually escaped the verbal and physical onslaught after joining an entertainment unit, and he found that his talent shielded him from further abuse. He basked in the approval of hundreds of anonymous white faces clapping and hooting, and he realized that his dancing was his weapon that broke down barriers.

Sammy returned to the stage wearing a black eye patch and converted to Judaism. He believed Jews and blacks suffered similarly, and he found comfort in the Torah and its teachings.

White America was Sammy’s audience, and balancing his dreams of equality with his need to maintain his stardom proved daunting at a time when America was deeply torn, and the pressures from both sides were often overwhelming.

The visual images that remained in the public consciousness, from being carried onstage like a little boy by Frank during their “Summit at the Sands” to the Nixon hug, belied a far deeper, more earnest side to his persona, a quest for truth and righteousness Sammy believed he could only find through stardom.

The bigger Sammy became, the more change he believed he could help effect in a deeply divided nation.

He’d throw himself into his Pac-Man arcade game and play for hours. Brian thought the game served as a cathartic release from the unknown pains of Sammy’s life. (Brian Dello head of Sammy’s security team)

“Who do you fight/when you want to break out/but your skin is your cage?”
From Golden Boy

There was so much damage related to Sammy Davis Jr., and perhaps it just wasn’t in the stars for a movie or Broadway play.

Why didn’t Sammy have ownership in his work? Why didn’t he appreciate the potential enormity that ownership provides and, if part of a successful project, the revenues would stream in perpetuity? It didn’t make financial sense to simply take whatever fee was being offered, no matter how lucrative, and give away the rights to the kingdom.

Sammy was among the select few who could claim personal relationships with presidents, kings, and queens on one hand, and gangsters, scam artists, and murderers on the other.

Frank didn’t ask, like everyone else, he ordered. And people responded. Sammy admired Frank’s power and his ability to make things happen. Sammy also liked the idea of associating with the same unsavory characters. Being feared meant being respected. But unlike Frank, who kept his business dealings with the underworld at arm’s length, Sammy jumped in headfirst, from borrowing money from Chicago mobsters to allowing his name to be used in various business ventures.

Sammy maintained a rigorous tour schedule and didn’t know–or didn’t want to know–what was really going on. There wasn’t much he could do anyway, given the people he was involved with.

Sonny knew it came down to injustice. The more he had learned about Sammy Davis Jr., the more he knew he had to fight for the memory, and legacy, of a great black icon.

Of course, there wouldn’t have been a book without Albert “Sonny” Murray. He’s a good man with a good heart, who carries a heavy burden, and I will always be indebted to him for sharing this difficult story with me.

Good clothes open many doors. Go Shopping.
You are interested in higher education, whether material or spiritual.
Even a broken clock is right two times a day.
More Fortunes >