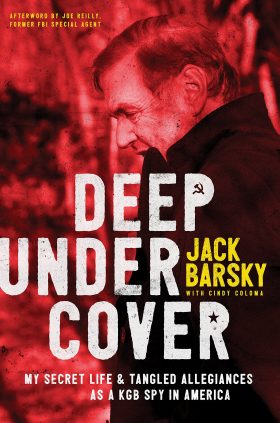 Tagline: My Secret Life and Tangled Allegiances as a KGB Spy in America

Declassified by Agent Palmer: A Book Review of Deep Undercover by Jack Barsky

Later I would discover that the ability to keep marching toward a goal without being held back by feelings or relationships was absolutely essential to building an undercover identity in another country.

As one of my professors once remarked, “It seems that Albrecht’s theoretical genius is way ahead of his practical prowess.”

…when trying to explain the difference between the eastern and the western sides of Berlin, I would say “The East was a movie shot in black and white. In the West, they had color.”

Kim Philby expressed my innermost thoughts precisely when he was asked why he joined the KGB. He said, “One does not look twice at an offer of enrollment in an elite force.”

The next day, I stashed my belongings in a suitcase and a large briefcase and boarded the train for Berlin. As we made our way toward the capital city, I realized I was on a trip to nowhere, without a return ticket. There would be many more trips like this one, but this train ride was the starting point of a most unusual journey. The destination on the map of my life was clearly marked with a hammer, a sickle, and a big question mark.

Bosses do not like to hear complaints or problems, they prefer solutions.

Although the matter was never mentioned again, I was certain that in his next report, Nikolai would note that I was honest to the bone and that I had a weakness for the fairer sex.

I was advancing up the ladder, earning my stripes, and would eventually be sent to America. This was so far beyond the dreams I’d had of becoming a professor of chemistry and living a respected life at the university, perhaps marrying and having children. My new path would follow an unknown route–perhaps like one of the heroic spies I grew up reading about. At the age of twenty-six, I had become convinced that I was meant to do something both very important and dangerous.

When it comes to basic life skills, repetition is the midwife of excellence.

The willingness to pound the pavement of one’s operational city is one of the necessities of undercover life.

It was harder to determine that I was not being followed. Caution is a spy’s best friend; paranoia is his enemy.

There are no published organizational charts in the undercover world.

“You’re going to become the kind of person that all the girls dream about.” He sighed, but there was a mischievous gleam in his eye.
“What are you talking about?”
“I was at a movie the other day, a spy movie, and I overheard two girls who were seated behind me. One of them said, ‘I wish I could meet a guy like that.’”
This made me laugh, It was true that I was about to be launched as an actual spy–and the aura of that could not be denied. However, undercover meant I couldn’t reveal my status to anyone.
“Well, if I follow the rules, which of course I will, I don’t see how going undercover will benefit me in the same way it benefits James Bond.”
We both laughed at this reality.

For the first time, I realized that I felt more comfortable in the country that I was spying on than I did in my native land.

Reflecting on my years as a spy, I have come to the conclusion that trust is the only viable foundation for a successful undercover operation.

For any reasonable man motivated by self-preservation, the equation was severely tilted in favor of returning home. However, I was not the same coldhearted, mission-focused individual I had been in the past, who would choose only the most logical and self-serving option.

Though I believed I had overcome my greatest obstacles, I couldn’t escape my greatest enemy–myself. I needed more than an escape; I needed transformation.

Though humanity’s search for knowledge is noble and good, our claims to absolute knowledge are nothing but arrogance.

Though I have always been–and will likely continue to be–a very active and involved individual, I finally began to understand the meaning of the word relax. It means to let go. It means to do what I have to do, but without the urge to control everything and without biting my nails for fear that my plans may go awry.

This book takes you through many adventures and reveals much about the world of the Cold War. But the most interesting parts are about the man himself. Flawed though he is, and scarred by many of life’s cuts, he soldiers on without complaint, trying to be responsible, trying to do the right thing. It is a great irony, but nonetheless true, that our country could use more people like Jack Barsky.

Even a broken clock is right two times a day.
Your moods signal a period of change.
Sharing little joys offer great hope to others.
More Fortunes >