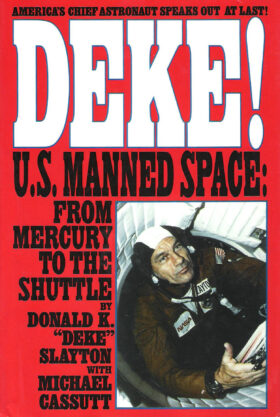 Tagline: U.S. Manned Space From Mercury to the Shuttle

Synopsis: An autobiography by one of America’s original astronauts, who later headed the astronaut program, chronicles Slayton’s life as a war hero and space shuttle pilot.

Declassified by Agent Palmer: If You can Only Read the Autobiography of One Mercury Seven Astronaut, Make it DEKE!

I guess when it comes to space and aviation, I’ve seen and done a lot in fifty years. My name isn’t the first one to come to mind when somebody says the word astronaut, but I was one of the original Mercury guys–the one who got screwed out of a mission for medical reasons. I hung in there and wound up running the Astronaut Office. Neil Armstong became the first person to walk on the moon because I selected him. I eventually got into space, however, on Apollo-Soyuz–thirteen years after I should have.

There’s an awful lot of just pure horseshit luck in flying. By the time a pilot gets to the test pilot level, if nothing else, he’s proved he’s lucky.

So for a while we wound up with an artillery guy flying with us to keep us honest. This guy had a great way of explaining the difference between the bomber and the bombed: “When you’re up here, all the bombs are addressed, ‘To whom it may concern.’ When you’re down there, you’re only worried about the one with your name on it.”

On October 21, 1946, I made my last Army flight. I had logged almost 1,100 hours of flying time as a pilot and 331 as a copilot, including sixty-three combat missions. I was twenty-two years old and I was going back to school.

It was August 1949. I had gone through a four-year course at the University of Minnesota in two and a half years.

I kept on skiing for years. It’s the closest I’ve ever come to flying without a plane.

Looking back, I’m amazed at the amount of drinking and flying we did. Part of it was just that it was the thing everybody did. Being the age we were, we could get away with it . . . just like we could get away with flying without G-suits, which happened frequently. It wasn’t as though we were exercise fanatics or anything like that. I might run a little, just to stay in some kind of shape, but I don’t know anyone who had a real exercise program. In some ways, it’s a miracle we survived.

While I thought the Lovelace physical examinations were excessive, I could at least see the point. But the idea behind all these so-called “stress” tests at Wright-Patterson escaped me completely. I’d flown combat missions and done operational and test flying for seventeen years by that point, like just about everybody else in the process. The fact that we had survived should have told them all they needed to know about stress. What were they supposed to learn from hooking me up to an idiot machine with flashing lights? Or asking me what I saw on a blank piece of paper? Or baking me in a chamber to 130 degrees? At least by putting me in a blackout chamber they let me catch a nap.

Our biggest problem, in fact, wasn’t with each other, it was with the press. We were all in one office there at Langley, just one big room on the second floor, with desks for the seven of us and our secretary, Nancy Lowe. Every time you’d try to get something done, somebody would be in there with a reporter. It was real aggravating. (The first thing I did when I took over the astronaut office was limit press access to one day a week. Every Friday you had to be ready to be interviewed. The other days you were free.)

Everybody later developed an opinion about what had really happened. There was one group that thought Gus had screwed up . . . that he had blown the hatch early by mistake. This, of course, is my gripe with Tom Wolfe’s The Right Stuff. He was kind of tough on Gus anyway, and in the matter of the hatch pretty much convicted him.

Given the time I spent with the pilots, I had a pretty good idea who was doing what. Some guys were model husbands, some guys played around and were pretty indiscreet, with a few in between. When it affected the way the work was being done, I didn’t hesitate to send a message.

Mercury was basically an unmanned system. It was designed to operate unmanned and that’s how it operated for three flights, at least, before we put anybody in it. That was Chuck Yeager’s complaint, which he wasn’t at all shy about stating: what do you need a pilot for?
But Gemini would not fly without a guy at the controls. It was a manned system, from scratch. It was laid out the way a pilot likes to have the thing laid out, the controls and displays. Gus was the guy who did all that. In fact, Tom Stafford, who was about six feet tall and weighed two hundred pounds, later complained that the Gemini cockpit had been sized for Gus–who was about fix-six one-sixty.

One thing that would probably have been different if Gus had lived: the first guy to walk on the moon would have been Gus Grissom, not Neil Armstrong.

But Bob Gilruth and headquarters and I agreed on one thing, prior to the Apollo fire: if possible,one of the Mercury astronauts would have the first chance at being first on the moon.
And at that time Gus was the one guy from the original seven who had the experience to press on through to the landing.

The fire and the investigation, and the redesign of the Apollo spacecraft, made it possible for us to reach the moon within President Kennedy’s deadline. If it hadn’t happened, I don’t know. We would have made it, but we would have had other problems.

Later on, people would talk about this process as if it were some kind of science. Or as if politics had controlled it–the fact that Neil was a civilian. All I can say is that a lot of factors, most of them beyond anybody’s control, put these three guys in the right place at the right time.

In the fall of 1969 the presidential task force headed by Vice President Spiro Agnew had published its recommendations for the future of American manned spaceflight. It was pretty ambitious stuff, calling for the development of a reusable space shuttle and the construction of a permanently manned orbiting space station. A space tug was also part of the program–this was basically a vehicle designed to operate only in space, from the station up to geosynchronous orbit, or possibly to the surface of the moon.
One of those options even called for a manned mission to Mars in the mid-1980s. I didn’t believe this was particularly likely, not on the schedule the task group laid out, anyway. There was a hell of a lot we didn’t know.

I have to admit I felt pretty good walking across the swing arm to the spacecraft . . . what the hell, it was only thirteen years overdue. I never planned on being the world’s oldest rookie astronaut, but I wasn’t going to complain.

I got some questions during the flight about how I was holding up, and answered that I really wasn’t doing anything my ninety-one-year-old Aunt Sadie couldn’t have done.

Even flying, which was all I wanted to do for fifty years, had its own requirements. If you got lazy there, though, you could get killed.

I don’t want to be retired–just downgrade my workaholic tendencies.

…we all look up the barrel of a loaded gun regularly without adequately assessing the real potential for disaster. I don’t recommend you stop taking risks–even the turtle cannot proceed without sticking out his next. But recognize that the good Lord has your number, and when it comes up, be prepared. You may not get as many chances as I’ve had.

A difference, to be a difference, must make a difference.
Today it’s okay to make a few choices by going with your instincts.
Even a broken clock is right two times a day.
More Fortunes >