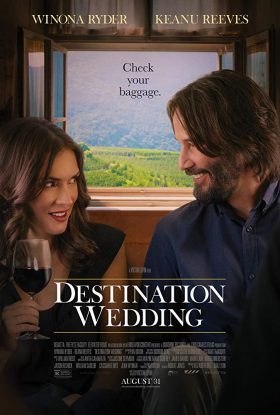 Synopsis: The story of two miserable and unpleasant wedding guests, Lindsay and Frank, who develop a mutual affection despite themselves.

Declassified by Agent Palmer: Agent Palmer’s Thoughts on Destination Wedding or This Post Can’t Be Ignored Because Then the Entire Internet Would End

Lindsay: Do you care about anything?

Frank: How many times in life have you been in love?

Frank: How does anybody drink wine at 11:00 in the morning?

Lindsay: But don’t you believe there’s someone for everyone?

Frank: When did crutches get a bad name? When you have a broken leg you need a crutch. In fact, it would be stupid not to have a crutch.

Frank: I’d rather be strong and ruined than weak and ruined.
Lindsay: I’m not weak. I just have hope.
Frank: That’s the same thing.

Lindsay: Why did you save me?

Lindsay: I’ve been pretty sure for a very long time that life is essentially a horrible experience…

Frank: If it all sucks, then fuck it, but if it doesn’t all suck, then there’s so much pressure…

Frank: There’s nothing beautiful or transcendent about being human.

Lindsay: What if happiness is contagious?

Frank: Why do people need the dangled carrot of a future?

Lindsay: Why would you want me to perpetuate my general circumstances?

Lindsay: Why do we live?

Lindsay: What if we’re falling in love?

Lindsay: Don’t you want to secretly have a romantic life that confirms your hopes instead of your cynicism?

Frank: How much shit has to fall on your head before you start wearing a hat?

Lindsay: You can’t die from jumping out of a basement window.

Lindsay: There are other people in the world.
Frank: There are?

Let’s finish this up now, someone is waiting for you on that.
Sharing little joys offer great hope to others.
Your moods signal a period of change.
More Fortunes >