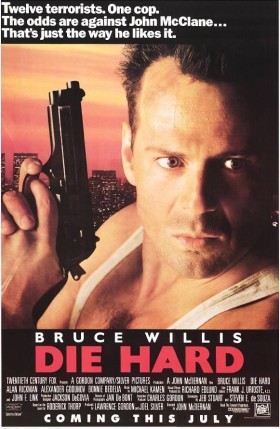 It will blow you through the back wall of the theater!

Twelve terrorists. One cop. The odds are against John McClane… That’s just the way he likes it.

He’s the only chance anyone has got.

It’s Christmas Eve In L.A. And The Party Action’s About To Explode… On The Fortieth Floor!

Suspense, Excitement, Adventure, On every level!

40 Storeys High – with Suspense, Excitement and Adventure on every level!

High above the city of L.A. a team of terrorists has seized a building, taken hostages and declared war. One man has managed to escape. An off-duty cop hiding somewhere inside. He’s alone, tired… and the only chance anyone has got.

Based On: Based on the novel “Nothing Lasts Forever” by Roderick Thorp

Synopsis: John McClane, officer of the NYPD, tries to save wife Holly Gennaro and several others, taken hostage by German terrorist Hans Gruber during a Christmas party at the Nakatomi Plaza in Los Angeles.

Declassified by Agent Palmer: Why Die Hard is a Great Christmas Movie and Action Thriller, All-in-One

John McClane: “Come out to the coast, we’ll get together, have a few laughs…”

Businessman: You wanna know the secret to surviving air travel? After you get where you’re going, take off your shoes and your socks then walk around on the rug bare foot and make fists with your toes.
John McClane: Fists with your toes?
Businessman: I know, I know, it sounds crazy. Trust me, I’ve been doing it for nine years. Yes sir, better than a shower and a hot cup of coffee.

Hans Gruber: Nice suit. John Phillips, London. I have two myself. Rumor has it Arafat buys his there.

John McClane: Now I know what a TV dinner feels like.

Hans Gruber: Mr. Mystery Guest? Are you still there?
John McClane: Yeah, I’m still here. Unless you wanna open the front door for me.
Hans Gruber: Uh, no, I’m afraid not. But, you have me at a loss. You know my name but who are you? Just another American who saw too many movies as a child? Another orphan of a bankrupt culture who thinks he’s John Wayne? Rambo? Marshal Dillon?
John McClane: Was always kinda partial to Roy Rogers actually. I really like those sequined shirts.
Hans Gruber: Do you really think you have a chance against us, Mr. Cowboy?
John McClane: Yippee-ki-yay, motherfucker.

Harry Ellis: Hey, business is business. You use a gun, I use a fountain pen what’s the difference? Let’s put it in my terms: you’re in a hostile takeover, you snatch us up for some green mail, but you’re not expecting some poison pill to be running around the building, am I right? Hans, bubby, I’m your white knight.

Hans Gruber: Due to the Nakatomi Corporation’s legacy of greed around the globe, they are about to be taught a lesson in the real use of power. You will be witnesses.

John McClane: Son of a bitch! Fist with your toes.

Hans Gruber: The circuits that cannot be cut are cut automatically in response to a terrorist incident. You asked for miracles, Theo, I give you the F.B.I.

John McClane: You throw quite a party. I didn’t realize they celebrated Christmas in Japan.
Joseph Takagi: Hey, we’re flexible. Pearl Harbor didn’t work out so we got you with tape decks.

Hans Gruber: Theo, are we on schedule?
Theo: One more to go then it’s up to you. And you better be right, because it looks like this last one is going to take a miracle.
Hans Gruber: It’s Christmas, Theo. It’s the time of miracles. So be of good cheer… and call me when you hit the last lock.

Hans Gruber: I’m going to count to three, there won’t be a four… Give me the code.

John McClane: I promise I will never even *think* about going up in a tall building again. Oh, God. Please don’t let me die.

Hans Gruber: Now, you can break the code?
Theo: You didn’t bring me along for my charming personality.

Supervisor: Attention, whoever you are, this channel is reserved for emergency calls only.
John McClane: No fucking shit, lady. Does it sound like I’m ordering a pizza?

Theo: All right, listen up guys. ‘Twas the night before Christmas, and all through the house, not a creature was stirring, except… the four assholes coming in the rear in standard two-by-two cover formation.

John McClane: Nine million terrorists in the world and I gotta kill one with feet smaller than my sister.

Hans Gruber: “And when Alexander saw the breadth of his domain, he wept, for there were no more worlds to conquer.” Benefits of a classical education.

John McClane: Drop it, dickhead. It’s the police.
Tony: You won’t hurt me.
John McClane: Oh, yeah? Why not?
Tony: Because you’re a policeman. There are rules for policemen.
John McClane: Yeah. That’s what my captain keeps telling me.

Holly Gennero McClane: After all your posturing, all your little speeches, you’re nothing but a common thief.
Hans Gruber: I am an exceptional thief, Mrs. McClane. And since I’m moving up to kidnapping, you should be more polite.

John McClane: Why the fuck didn’t you stop ’em, John? ‘Cause then you’d be dead, too, asshole.

Harry Ellis: Hey babe, I negotiate million dollar deals for breakfast. I think I can handle this Eurotrash.

Hans Gruber: I thought I told all of you, I want radio silence until further…
John McClane: Ooooh, I’m very sorry Hans. I didn’t get that message. Maybe you should’ve put it on the bulletin board. I figured since I’ve waxed Tony and Marco and his friend here, I figured you and Karl and Franco might be a little lonely, so I wanted to give you a call.
Karl: How does he know so much about th…
Hans Gruber: That’s very kind of you. I assume you are our mysterious party crasher. You are most troublesome, for a security guard.
John McClane: Eeeh! Sorry Hans, wrong guess. Would you like to go for Double Jeopardy where the scores can really change?
John McClane: Whoa, these are very bad for you.
Hans Gruber: Who are you then?
John McClane: Just a fly in the ointment, Hans. The monkey in the wrench. The pain in the ass.

Hans Gruber: This time John Wayne does not walk off into the sunset with Grace Kelly.
John McClane: That was Gary Cooper, asshole.

Nothing in the world can take the place of persistence.
Good clothes open many doors. Go Shopping.
Courtesy is the password to safety.
More Fortunes >