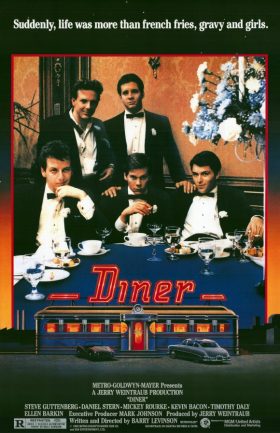 Suddenly, life was more than french fries, gravy and girls.

What they wanted most wasn’t on the menu.

Synopsis: A lively, poignant tale of friends trying to recapture their lost innocence in 1959 Baltimore.

Declassified by Agent Palmer: Thanks to Barry Levinson, We’ll Always Have ‘Diner’

“You know what word I’m not comfortable with? Nuance. It’s not a real word. Like gesture. Gesture’s a real word. With gesture you know where you stand. But nuance? I don’t know. Maybe I’m wrong.”

“You gonna finish that?”

“If you want to talk, you always have the guys at the diner. You don’t need a girl if you wanna talk.”

“We got nothing to talk about” “We always got the diner”

“You ever get the feeling there’s something going on we don’t know about?”

“Always a dreamer, eh Boog?” “If you don’t have good dreams, you’ve got nightmares.”

“I do! Every one of my records means something! The label, the producer, the year it was made. Who was copying whose style… who’s expanding on that, don’t you understand? When I listen to my records they take me back to certain points in my life, OK? Just don’t touch my records, ever! You! The first time I met you? Modell’s sister’s high school graduation party, right? 1955. And Ain’t That A Shame was playing when I walked into the door!”

“You’re dealing with a rational girl; that’s your problem.”

“All I did was I parked the car on a nice lonely road, I looked at her, and I said fuck or fight.”

“I’ll hit you so hard, I’ll kill your whole family.”

“We all know most marriages depend on a firm grasp of football trivia.”

“…when you’re dating, everything is talking about sex. Where can we do it? Why can’t we do it? Are you parents gonna be out so we can do it? Everything is always talkin about getting sex, and then planning the wedding, all the details. But then, when you get married… it’s crazy, i dunno. You can get it whenever you want it. You wake up in the morning and she’s there. You come home from work and she’s there. So all that sex planning talk is over with. And so is the wedding planning talk cause you’re already married. So… ya know I can come down here and we can bullshit the entire night away but I cannot hold a 5 minute conversation with Beth. I mean it’s not her fault, I’m not blaming her, she’s great… It’s just, we got nothing to talk about… But it’s good, it’s good”

Good clothes open many doors. Go Shopping.
The path of life shall lead upwards for you.
You are interested in higher education, whether material or spiritual.
More Fortunes >