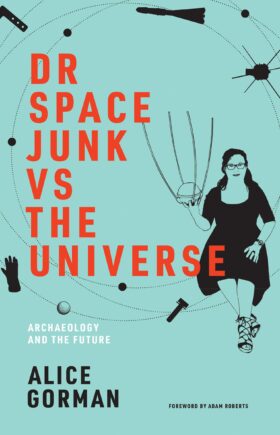 Dr Space Junk vs The Universe

Tagline: Archaeology and the Future

Synopsis: Alice Gorman is a space archaeologist: she examines the artifacts of human encounters with space. These objects, left behind on Earth and in space, can be massive (dead satellites in eternal orbit) or tiny (discarded zip ties around a defunct space antenna). They can be bold (an American flag on the moon) or hopeful (messages from Earth sent into deep space). They raise interesting questions: Why did Elon Musk feel compelled to send a red Tesla into space? What accounts for the multiple rocket-themed playgrounds constructed after the Russians launched Sputnik? Gorman—affectionately known as “Dr Space Junk” —takes readers on a journey through the solar system and beyond, deploying space artifacts, historical explorations, and even the occasional cocktail recipe in search of the ways that we make space meaningful.

The past is above us rather than below.

The Space age sits at the moment in an uncanny valley of memory: too recent to be thought of as ‘history’ in the Ancient Greek or Pharaonic Egypt sense of the word, but too far back in time to inspire the young generation.

One of the key principles of the OST is that space is the common heritage of humanity and cannot be owned by anyone — government, nation, individual or corporation. (OST = Outer Space Treaty)

We have a chance to make a new world beyond this world, but it will be the same old world all over again if we’re not paying attention to the narrative.

In this book, I want to take a physical journey through the solar system and beyond, and a conceptual journey into human interactions with space… This is about understanding the ways we make space meaningful.

You can’t be what you can’t see, but you can read about it.

There are artefacts in space, made by human cultures, and discarded in the same way as stone tools across the landscape. What lines could we draw between them to make meaning from this modern junk pile?

The amateur satellites demonstrate the diversity of space artefacts and the way everyday people can be involved in high technology.

Archaeology is about humans, and its scale is very human.

Our bodies have not changed that much over the millennia, though as genetic engineering, AIs and cyborgs open the potential to remake the human entity in some other image, perhaps that’s something we shouldn’t take for granted.

You don’t need to be an astronaut to do some amazing space archaeology.

While we associate rockets strongly with space, there are no whole rockets there. There are plenty of upper stages, just no rockets with all the parts present. The rocket is really a terrestrial, not a space, artefact.

The Burra Charter says we should do ‘as much as is necessary and as little as possible’ to retain cultural significance.

Fear not, Immortals, we forgive your faults,
And as we come to claim our promised place
Aim only to repay the good you gave
And warm with human love the chill of space

Lunar science was tarnishing the perfect pearly light, which bestowed ethereal beauty and inspired contemplations of the ineffable.

There is an urgent need to develop an environmental management framework for space, and cultural heritage must be part of this. Space archaeologists have an important role to play in the next phase of human engagement with the solar system.

How do you analyse something you can’t touch? It doesn’t bother planetary scientists who rely on data acquired from remote sensing. This is what characterises space archaeology too, at least at the present time. It’s all an archaeology of ‘not-quite-there’, where we use historical and proxy data in order to make hypotheses about what lies beyond our reach in space.

Failure to develop more sustainable ways of being spacefaring has consequences.

In June 2018, Elon Musk said, on Twitter:
It is unknown whether we are the only civilization currently alive in the observable universe, but any change that we are is added impetus for extending life beyond Earth. This is why we must preserve the light of consciousness by becoming a spacefaring civilization & extending life to other planets.

If space interests are going to overturn the idea of space as the common heritage of humanity, perhaps they should consider Indigenous systems of land tenure and management as a model. Flags don’t have to define the frontier.

I don’t know exactly how the symbolism of death will change the meaning of space, but I know something will be different afterwards.

There are so many ways of connecting to space, and the stories we tell about snake make a difference.

A difference, to be a difference, must make a difference.
Whoever wants to reach a distant goal must take small steps.
Good clothes open many doors. Go Shopping.
More Fortunes >