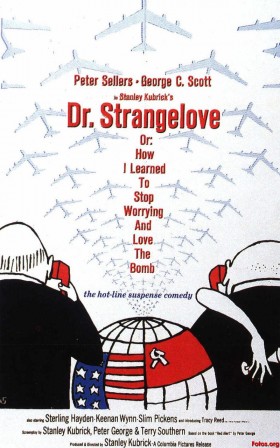 Dr. Strangelove or: How I Learned to Stop Worrying and Love the Bomb

Based On: “Red Alert” by Peter George

Declassified by Agent Palmer: Agent Palmer Commentates on Dr. Strangelove or: How I Learned to Stop Worrying and Love the Bomb

President Merkin Muffley: “Gentlemen, you can’t fight in here! This is the War Room.”

Narrator: For more than a year, ominous rumors had been privately circulating among high-level Western leaders that the Soviet Union had been at work on what was darkly hinted to be the ultimate weapon: a doomsday device. Intelligence sources traced the site of the top secret Russian project to the perpetually fog-shrouded wasteland below the Arctic peaks of the Zhokhov Islands. What they were building or why it should be located in such a remote and desolate place no one could say.

President Merkin Muffley: I will not go down in history as the greatest mass-murderer since Adolf Hitler.
General “Buck” Turgidson: Perhaps it might be better, Mr. President, if you were more concerned with the American People than with your image in the history books.

Narrator: “In order to prevent against surprise nuclear attack, America’s Strategic Air Command maintains a large force of B-52 bombers, airborne, 24 hours a day. Each B-52 can deliver a nuclear bomb load of 50 megatons, equal to 16 times the total explosive force of all the bombs and shells used by all the armies in World War 2. Based in America, the Airborne Alert Force is deployed from the Persian Gulf to the Arctic Ocean, but they have one geographical factor in common – they are all two-hours from their targets inside Russia.”

Major T. J. “King” Kong: “Well, boys, I reckon this is it – nuclear combat toe-to-toe with the Roosskies.”

General “Buck” Turgidson: “I’m not saying we won’t get our hair mussed.”

President Merkin Muffley: “Now then, Dmitri, you know how we’ve always talked about the possibility of something going wrong with the Bomb…”

Dr. Strangelove: “Of course, the whole point of a Doomsday Machine is lost, if you *keep* it a *secret*! Why didn’t you tell the world, EH?”

Colonel “Bat” Guano: “What, you don’t think I’d go into combat with loose change in my pocket, do you?”

Colonel “Bat” Guano: “That’s private property,”
Group Capt. Lionel Mandrake: “Okay. I’m gonna get your money for ya. But if you don’t get the President of the United States on that phone, you know what’s gonna happen to you? … “You’re gonna have to answer to the Coca-Cola company.”

General “Buck” Turgidson: “If the pilot’s good, see, I mean if he’s reeeally sharp, he can barrel that baby in so low… oh, you oughta see it sometime. It’s a sight. A big plane like a ’52… varrrooom! Its jet exhaust… frying chickens in the barnyard!”

General Jack D. Ripper: Fluoridation is the most monstrously conceived and dangerous communist plot we have ever had to face.

General “Buck” Turgidson: That’s right, sir, you are the only person authorized to do so. And although I, uh, hate to judge before all the facts are in, it’s beginning to look like, uh, General Ripper exceeded his authority.

Group Capt. Lionel Mandrake: If you don’t put that gun away and stop this stupid nonsense, the court of Enquiry on this’ll give you such a pranging, you’ll be lucky if you end up wearing the uniform of a bloody toilet attendant.

General “Buck” Turgidson: That’s right, sir, you are the only person authorized to do so. And although I, uh, hate to judge before all the facts are in, it’s beginning to look like, uh, General Ripper exceeded his authority.

Dr. Strangelove: Mr. President, it is not only possible, it is essential. That is the whole idea of this machine, you know. Deterrence is the art of producing in the mind of the enemy… the FEAR to attack. And so, because of the automated and irrevocable decision-making process which rules out human meddling, the Doomsday machine is terrifying and simple to understand… and completely credible and convincing.