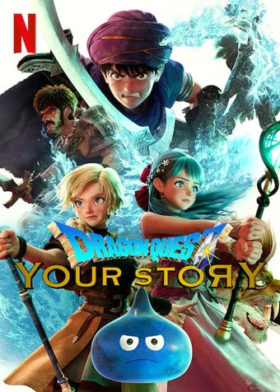 Based On: Based Dragon Quest V: Hand of the Heavenly Bride by Square Enix

Synopsis: Luca follows in his father’s footsteps to rescue his mother from evil Ladja. Finding the heavenly hero who wields the Zenithian sword is his only hope.

A father’s love for his son is a precious thing indeed. But nothing lasts forever.

Dub: Nimzo is the ultimate evil, the ultimate darkness, the end of everything. It cost countless Zenithians their lives just to seal him away all those years ago.

Sub: He’s the ultimate evil, capable of plunging this world into eternal darkness. Countless Zenithians lost their lives sealing him away all those years ago.

Dub: Your eyes tell another story. They tell a story of a man desperately hiding his feelings from himself and the world. So what gives? Did you put a spell on yourself?

Sub: Your eyes tell a different story. They say you’re hiding your true feelings. Did you put a spell on yourself?

Dub: Your one true love is someone you can tell anything to.

Sub: Your true love is someone you can tell anything to.

Dub: She and I have always been there for each other whenever the going got tough. She can be overbearing and sometimes she doesn’t know when to stop talking, she has the cutest smile.

Sub: We’ve always been there for each other when we’re in a spot of bother. She’s always so bossy, and she never knows when to shut up, but she has the cutest smile.

Dub:
Old Woman: I thought we’d meet again. Come to your senses, have you?
Luca: You know, you’ve got a lot to answer for. I could have married a proper lady and inherited a vast fortune, but that’s all down the drain now, thanks to you.
Old Woman: I think you’d have found things like that mean very little. Never lie to yourself, you would never have been happy that way.
Luca: But still, how did looking at my eyes tell you all that. I didn’t even know how I felt myself?
Old Woman: An old woman’s intuition is powerful! Now you know!

Sub:
Old Woman: I see you’ve come to your senses.
Luca: You’ve got a lot to answer for. I could have married a kind, graceful woman, inherited the Briscoletti fortune, but it’s all gone down the drain.
Old Woman: Such things mean little if you have to lie to yourself to get them. You’ll bever be happy that way.
Luca: Still, you saw right through me just by looking into my eyes. Even I didn’t know how I felt.
Old Woman: Never underestimate a woman’s intuition, boy.

Dub: Watch as your world is plunged into unending darkness.

Sub: Watch as the world is plunged into darkness.

Dub
Old: What would you do if life were about to get really tough?
Young: I might be little but I’m still the son of the great Pankraz. No matter how hard things get for me I can pull through.

Sub
Old: What would you do if life was about to get tough?
Young: I might be little, but I’m still Pankraz’s son. Nothing scares me.

Dub: I was injected into the code for Nimzo’s character, you might call me a virus. I’m impressed that Mada sensed something was off. Huh, all of naught. Once, many years ago there was a game called Dragon Quest. It was wildly successful. A few decades later, this state-of-the-art virtual reality technology was perfected. Once it was released to the public that same game Dragon Quest was remade for this new platform. And you are in that game now. Desperately chasing nostalgia you just had to give it a shot.

Sub: I’m a virus that was hidden in the code for Nimzo’s character. It would seem that Mada noticed something was a bit fishy. Long ago, a game called Dragon Quest took the world by storm. A few decades later, this state-of-the-art VR technology was perfected. Once commercialized, that same Dragon Quest game was remade for this new platform. And that is where you are now. Drunk on nostalgia, you decided to give the game a shot.

Dub: I can’t just ignore my purpose. It would seem my creator hates you and all others who call this pathetic world home. That’s why I exist. Nothing more, nothing less.

Sub: The person who created me reviles the scum who call this virtual world home. So, they wrote me and loaded me in.

Dub: I’m little more than the result of a genius hacker’s boredom. One more thing, my creator had a message for you. Don’t worry it’s short. “Grow up, loser.”

Sub: I’m merely the result of a genius programmer’s boredom. Oh, right, he gave me a message for you. He says “grow up, loser.”

Dub
Luca: The worlds that these games brought to life, they’ve never been fake to me. Not in the least. Even if they were only programs, the time that I spent with them was real. And these journeys, these battles, everyone I met, to me it was all true.
Virus: They are false, illusions.
Luca: No! They were just another reality!

Sub
Luca: I never once thought of the worlds in these games as fake. Even if they’re all just programs, the time I spend with them was real. And these journeys, these battles, everyone I met, they’ll always be here.
Virus: They are hollow illusions.
Luca: No! They’re just another reality!

Dub: When we get back to Whealbrook, this adventure will come to an end, I’ll have to return to the real world… But you’ll always be real to me, all of you.

Sub: When we reach my hometown, this adventure will come to an end and I’ll return to the real world… But you’ll always be real to me, all of you.

This is as real as it gets. I was the hero.

Let’s finish this up now, someone is waiting for you on that.
To let another into your heart, first let yourself in.
Your moods signal a period of change.
More Fortunes >