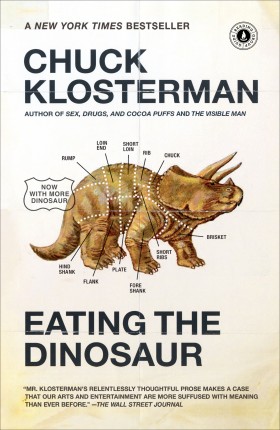 Synopsis: Q: What is this book about?

A: Well, that’s difficult to say. I haven’t read it yet—I’ve just picked it up and casually glanced at the back cover. There clearly isn’t a plot. I’ve heard there’s a lot of stuff about time travel in this book, and quite a bit about violence and Garth Brooks and why Germans don’t laugh when they’re inside grocery stores. Ralph Nader and Ralph Sampson play significant roles. I think there are several pages about Rear Window and college football and Mad Men and why Rivers Cuomo prefers having sex with Asian women. Supposedly there’s a chapter outlining all the things the Unabomber was right about, but perhaps I’m misinformed.

Q: Is there a larger theme?

A: Oh, something about reality. “What is reality,” maybe? No, that’s not it. Not exactly. I get the sense that most of the core questions dwell on the way media perception constructs a fake reality that ends up becoming more meaningful than whatever actually happened. Also, Lady Gaga.

Q: Should I read this book?

A: Probably. Do you see a clear relationship between the Branch Davidian disaster and the recording of Nirvana’s In Utero? Does Barack Obama make you want to drink Pepsi? Does ABBA remind you of AC/DC? If so, you probably don’t need to read this book. You probably wrote this book. But I suspect everybody else will totally love it, except for the ones who totally hate it.

“most jobs are social and many are enriching and unnecessary.”

A difference, to be a difference, must make a difference.
You are interested in higher education, whether material or spiritual.
Nothing in the world can take the place of persistence.
More Fortunes >