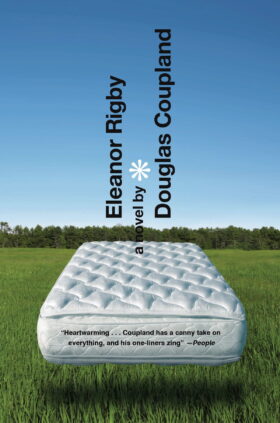 Synopsis: Liz Dunn has little to keep her going until a strange young man named Jeremy arrives in her life, upsetting her quiet routine and triggering events that take Liz around the world, into danger, and maybe, for the first time, in reach of happiness.

Declassified by Agent Palmer: Get lost in the deep purpose of Eleanor Rigby

Sure, I think the zodiac is pure hooey, but when an entirely new object appears in the sky, it opens some kind of window to your soul and to your sense of destiny. No matter how rational you try to be, it’s hard to escape the feeling that such a celestial event portends some kind of radical change.

I am a traitor to my name: I’m not cheerful or domestic. I’m drab, crabby and friendless. I fill my days fighting a constant battle to keep my dignity. Loneliness is my curse–our species curse–it’s the gun that shoots the bullets that make us dance on a saloon floor and humiliate ourselves in front of strangers.

One of my big problems is time sickness. When I feel lonely, I assume that the mood will never pass–that I’ll feel lonely and bad for the rest of my life, which means that I’ve wrecked both the present and the future. And if I look back on my past, I wreck that too, by concentrating on all the things I did wrong. The brutal thing about time sickness is that naming it is no cure.

I curled myself into a ball and cried quietly, doing that thing that only young people can do, namely, feeling sorry for myself. Once you’re past thirty, you lose that ability; instead of feeling sorry for yourself, you turn bitter.

I wish modern science would invent a drug that causes time to feel much longer, the way it felt when you were a child. What a great drug. A year would feel like a year, not ten minutes. Your adulthood would feel long and full instead of like some out-of-control carnival ride. Who would want a drug like this? Older people, I’d guess–people whose sense of passing time has hit the acceleration pedal.

“You look fine. What’s wrong with you?”
I said, “Multiple sclerosis.”
“Oh.”
I tell you, those two words are charged, yet nobody knows with what.

This must be what it feels like to be a normal person at the end of a day: small and large dramas; secrets and revelations; coffee cups and plates caked with dried food.

Even the most random of threads of life always knit together in the end.

I sometimes think that having visions is a way of inserting yourself into the future you suspect you’re never going to have. People who see the world coming to an end are simply people who can’t imagine life after they die. If they have to go, they’re going to take the world along with them.

He escorted me by the elbow, which nobody had ever done for me before. The gesture was corny yet reassuring. He reminded me of a cab driver I once met in Seattle, a bearded grump who said he was once Director of Theoretical Astrophysics at Kiev University.

It’s kind of nice not to know for sure what happens to us before we’re born or after we die–or to be unsure what will happen to us in that nervous, iffy time that exists between the point at which we decide to change our lives and the point where our lives actually change.

Whoever wants to reach a distant goal must take small steps.
Today it’s okay to make a few choices by going with your instincts.
A difference, to be a difference, must make a difference.
More Fortunes >