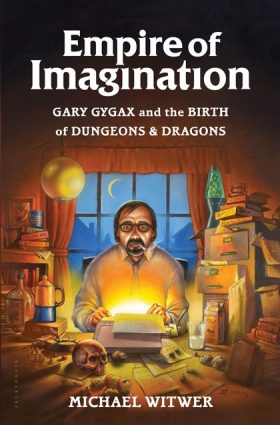 Tagline: Gary Gygax and the Bith of Dungeons & Dragons

Synopsis: The life and times of Gary Gygax.

Declassified by Agent Palmer: Michael Witwer Rolls a Natural 20 with Empire of Imagination: The Life and Legacy of Gary Gygax.

While the story’s narrative is based on an extensive research and interview process, I have also used a bit of imagination and informed judgement to fill in gaps of this dynamic yet largely unknown story, making it as complete and cohesive as possible.

Out of respect for those who were present at the time of these events, I feel it is important to reiterate that great lengths were taken to be as factually accurate as possible, but I also believe the dramatic aspect of the narrative is fully in line with detailing a remarkable life such as Gary’s.

Simply put, his seminal game made these later multibillion-dollar pop culture phenomena possible. But unlike other innovators who laid the foundations of today’s popular culture–luminaries such as Steve Jobs and Walt Disney–Gygax and his esoteric game are relatively unknown to the mainstream, yet revered by the geeky faithful.

I hope Empire of Imagination will answer these questions and others about the man who was ranked number one on Sync magazine’s list of the fifty biggest nerds of all time. And in an era when it is chic to be geek, Gary Gygax is king, making his story as relevant today, arguably more so, as it was when D&D was “the great game of the 1980s.”

The story of Roland the Paladin was one of Gary’s favorites, a story he’d known for as long as he could remember. Since his earliest days it had been a nightly ritual for his father to tell him fantastic stories of “giants and dragons” and “wise old wizards with magic rings,” and Gary had acquired a true passion for these tales of sword and sorcery.

In short, the seventeen-year-old was more than an unusual eccentric case; he was a small-town “bad boy” who clearly marched to the beat of his own drummer and appeared to have no future.

The Fantasy Supplement, comprising the last fourteen pages of Chainmail, invited users to “refight the epic struggles related by J.R.R. Tolkien, Robert E. Howard, and other fantasy writers; or you can devise your own world.”

Though Gary remained enamored of the medieval-type fantasy genre, it is notable that he actually disliked the writings of J.R.R. Tolkien, author of the overwhelmingly popular The Hobbit and the Lord of the Rings series. He would go on to say that Tolkien’s work was so dull, I mean, there was no action in it.”

Nonetheless, Gary was very familiar with Tolkien’s characters and settings, and would have almost certainly conceded that Tolkien’s recently re-released works were the main driver in the fantasy craze of the sixties and early seventies.

Of course, the discomfort of sleep deprivation was a very familiar feeling for Gary.

“I write mainly because I have so much information inside I just have to . . . The main ‘no-no’ I have is not to ignore an urge to write. Ideas are ephemeral, slip away too quickly, so when the muse is there go like hell.” – Gary

In fact, Don Kaye was so convinced, he would bet his life on it–a loan against his life insurance, that is–and Tactical Studies Rules (TSR) would be born.

TSR employees and executives so frequently utilized this gaming haven that it was well accepted that at least 5 percent of the interoffice mail traffic was related to employees’ ongoing games. To be sure, this was a gaming company run for gamers by gamers.

Nonetheless, these frightening claims by self-righteous monitors, along with a series of alarming comic strips by Jack Chick illustrating the insidious allegedly satanic nature of D&D, left a bad taste in the mouth of concerned parents for years to come–a reputation the game has not entirely shaken to this day.

Within a few years, TSR’s annual revenue would reach $30 million. True to the notion that “all press is good press,” and in a bizarre twist of fate, D&D had benefited tremendously from the national uproar that surrounded the game. But it was also these controversies that would simultaneously make and break this unique game, providing it significant niche success, but forever holding it out of the mainstream.

As a matter of context, TSR’s revenue of $30 million, even in 1984 dollars, isn’t astronomical, but still quite impressive considering that many of its products were developed and marketed to a self-limiting audience: that is, prospective Dungeon Masters, not players. While a module or sourcebook might be purchased by a single Dungeon Master, the materials were regularly used to facilitate gaming groups of four to twenty individuals. The pricey Dungeon Master’s Guide even includes this caution as its introduction: “Discourage players from reading this book, and certainly don’t let players consult it during the game.” For better or worse, this may have been an inherent flaw in TSR’s business model.

It had become clear that Gary’s last few years of terrific success, after many years of poverty, had created and nurtured his appetites for a larger-than-life reality.

Though the company was grossing $30 million in sales, it was only marginally profitable. TSR had also managed to accumulate $1.5 million in debt. The financial difficulties were all the more surprising because they had occurred in the face of some ostensible spectacular successes under the Blumes’ watch. These included the successful release of a new role-playing game called Marvel Super Heroes, and a 1984 series of bestselling D&D modules and novels based on a new campaign setting developed by Tracy Hickman and Margaret Weis called Dragonlance.

He had the temperament of a creative visionary, one who had been foiled at every turn professionally and artistically.

Gary’s appearance on the popular Fox television show was a high-water mark in many ways. Twenty-five years after Gary had sold his first hand-assembled Dungeons & Dragons box set, the game had indeed found its place in popular culture. No longer perceived as dangerous and subversive (though some continued to contend otherwise), the game now firmly held a prominent place in the world–a mainstay among the geeks. This was no bad company given that these geeks were beginning to take over as computer programmers, engineers, technology experts, writers, economists, software designers, film directors, and CEOs. They were everywhere, and they were in charge.

A badly worn keyboard sat before him, its letters barely visible anymore due to heavy use. This was at least a bit problematic, as Gary always had been a clumsy and fat-fingered keyboardist–a self-described “Columbus Method typist . . . discover and land!”

This self-described “risk-taking, Camel-straight-smoking, nonconformist who loved gaming but wasn’t averse to hanging out in a biker bar” had accomplished great things–remarkable things. He had invented an entire industry that had, in many ways, sparked a revolution of creativity and imagination.

Providing camaraderie through D&D and its role-playing offspring might, in fact, be Gary Gygax’s greatest legacy. “It founded a means for socially awkward people to socialize,” said early TSR employee and Dragon editor Tim Kask. What great gift can a man give than the gift of friendship? To many, socializing comes quite naturally, but for countless others, it does not. To these, Gary gave companions–not just friends, but fellow adventurers, sharing dangerous journeys and exotic quests.

“Millions upon millions of players around the world live and play in imaginary worlds built on the back of what Gary first conceived.” (Richard Garriott, creator of Ultima)

To be sure, Gygax did not create the fantasy genre, but he certainly popularized it in a very personal way that not only bolstered its audience but also multiplied its creators and innovators.

“He showed us the potential for games to bring humanity together,” said D&D historian Paul Stormberg when asked about Gary’s legacy.

Whether it be as a cobbler, farmer, gamer, or father, Gary Gygax’s legacy lives on through his family, his friends, the games he invented, and the culture of geeks who played the game and subsequently took over the world–a world that he prepared for imagination. This is Gary’s empire of imagination.

As usual, the legendary person who inspired this book best speaks for himself: “The books I write because I want to read them, the games because I want to play them, and the stories I tell because I find them exciting personally . . . I would like the world to remember me as the guy who really enjoyed playing games and sharing his knowledge and his fun pastimes with everybody else.”

You are interested in higher education, whether material or spiritual.
Courtesy is the password to safety.
The path of life shall lead upwards for you.
More Fortunes >