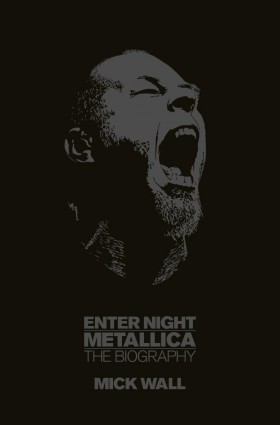 Tagline: A Biography of Metallica

Synopsis: Their roots lie in the heavy rock of 70s groups like Deep Purple. The music they played—heavy metal mixed with punk attitude—became its own genre: thrash. Their bassist died and they survived to became the biggest-selling band in the world. As grunge threatened to overtake them, they reinvented themselves. Then their singer went into rehab and they almost fell apart. They are Metallica, the most influential heavy metal band of the last thirty years.

Declassified by Agent Palmer: Enter Night: A Biography of Metallica by Mick Wall is THE Definitive Story of Metallica

“Not just anyone, either, but the one they all felt carried with him most of the luck. The one they cherished above the rest, above each other, that they always looked up to, even as they made fun of him, or chose to disregard his advice, his sense of integrity and of right and wrong, always that little bit too much for the rest, just young fucks not always into what was right but what was fun right now.” – On Cliff’s death

“Fuck it all and fucking no regrets!” – James Hetfield from Damage Inc

“It gave the boy a supreme sense of entitlement; a super self-confidence that meant no door would remain closed to him for long, the very idea that he might not be welcome somewhere never entering his mind.” – On Lars

“Once describe as looking like the cowardly lion from The Wizard of Oz, James Hetfield actually resembled the wizard himself – a timid, unsure character hiding behind a big scary screen image.”

“Cliff’s musical philosophy was explained by Jan [his mother] as: ‘There’s somebody in their garage that hasn’t been discovered that’s better than you are.’”

“‘What it all came down to,’ said Lars, when we spoke in 2009, ‘was the element of variety. It was like, after you’ve written “Fight Fire with Fire [and] “Battery”… what else are you gonna do? By repeating it you run the risk of watering it down, because they’ll never be as good as what you’ve already done. Or you have to go somewhere else and try something else. And for us, we had to go somewhere else and try something else.’” – Lars on what came after Master of Puppets

“Suddenly we were selling albums and a lot of it had to do with just going out there and playing our asses off, putting on a great show, just bringing the music to the people in that way.” Kirk on selling Master of Puppets

“When asked what advice he might have to pass on to any aspiring young musicians, Cliff had shrugged and said, ‘When I first started, I decided that I would devote my life to it.’”

“Metallica’s blood was purer, truer; they belonged to a proud tradition that stretched back through Iron Maiden and Motorhead, to ZZ Top (before the cutesy videos) and Lynyrd Skynyrd; all the way back to Zeppelin and Sabbath; groups that didn’t kiss ass or kowtow to the Man.”

“People can throw all this Tap shit at me all day, it just reflects of mee. I [Lars] don’t give a shit.’ Or, as James put it: ‘Here it is, black sleeve, black logo, fuck you.’”

“Doug Goldstein, had to admit the tour had become ‘like people who go to watch the Indy 500. They don’t go to watch the race. They go to see the crash.’” On the Tour with GNR

“We’re a record company’s dream because we don’t require radio promotion or marketing. We don’t go out and make million-dollar videos. We tour until we fall on our faces and that buzz generates word of mouth. We’re as low maintenance a group as you can get” – Lars on the band

“What James would later call ‘the U2 version of Metallica.’” – James on Load/Reload

“Metallica may have had all the legal rights in the Napster case but publicity it was the website that would occupy the moral high ground, becoming Robin Hood to the band’s nasty Sheriff of Nottingham.”

“As Alexander Milas says, it all left Metallica looking like ‘the anti-christ. It soured the entire universe on Lars Ulrich, who had pretty much successfully identified himself as the biggest dick in the galaxy.” – Post Napster

“For the first time since Master of Puppets, however, Metallica weren’t out to primarily make an album that please fans or critics, but to please themselves; an album that spoke to them on the deepest level, come what may. In this regard, it could be argued, they succeeded completely; that St. Anger should be viewed in the same historical light as equally personal, often misunderstood, even loathed albums.”

“‘I can see how someone could get caught up in that fear of running out of creative juice,’ allowed James. ‘But I truly don’t believe that. Music was a great gift for me and I discovered that somewhat early, but I don’t need alcohol, I don’t need anger, I don’t need serenity, I don’t need any of those things to be creative.”

“It’s been a huge learning experience and something that Jason set in motion for all of us. He was the sacrificial lamb for our spiritual and mental growth as well as our creative growth, and it just sucks. It’s medieval.” – Kirk on Jason leaving

“As J.R.R. Tolkien once put it, ‘the best human stories are always about one thing: the inevitability of death.’”

“You know, they talk about the Big Four. Quite honestly, there was a Big One, and that was Metallica. They were miles ahead of all of us – they’re the U2 of heavy metal. They kind of transcended everything. They are true royalty. As far as the rest of us, there’s a Big One and then quite a ways behind them there’s the other three of us.” David Ellefson – Megadeth bassist

“Only seven artist have sold more albums in America than Metallica. Three of them – The Beatles, Led Zeppelin and Pink Floyd – are officially defunct. Of the others – the Eagles, Aerosmith, the Rolling Stones and Van Halen – while they still tour and record sporadically, all can now be considered nostalgia acts, great to see, but no longer considered in the vanguard when it comes to making new music. Until recently Metallica was the sole exception. Not just touring and recording but still considered to be vital, even important. For how long that will continue, however, only time will tell. At this stage, it hardly matters. Their appeal will remain undimmed.”

Nothing in the world can take the place of persistence.
Fame and fortune are coming your way.
Courtesy is the password to safety.
More Fortunes >