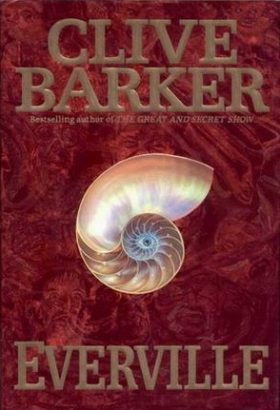 Tagline: The Second Book of “The Art”

Synopsis: Everville tells the story of a small town of the same name, from its creation to transformation over the years. Several characters populate the book “The Great and Secret Show,” some from our world and others from Quiddity, the vast universe or afterlife hinted at in the first book of the series.

Declassified by Agent Palmer: Everville by Clive Barker is a brilliant Sequel to The Great and Secret Show (Spoiler Free Review)

Know it or not (and in his experience artists knew very little) they were inspired by the very opposite of what they claimed.

A speech from a pseudo-historical tragedy called Serenissima: “I have nothing but you, my sweet Serenissima. You are my sense, my sanity and my soul. Go from me now, and I am lost in the great dark between the stars, and cannot even perish there, for I must live until you still my heart. Still it now! I beg thee, still it now, and let my suffering cease.”

If Buddenbaum had learned anything in his years of wandering, it was that things mundane and things miraculous were not, as reason had it, irrevocably divided. Quite the reverse.

None of these travelers had profited from their journey however; they had returned wounded and melancholy. The sweet simplicities of God and goodness no longer made sense to them, and human intercourse gave them no comfort. Life was meaningless, they had all then concluded, whether in this world or that.

But patience was easy if it was all you had; and it was.

“Maybe the messiahs we imagine are more important than the real thing.At least they don’t bleed when you crucify ‘em.”

He was lucky, wasn’t he? Love had found him, in the form of a woman who would have died for him this afternoon. Most people never had that in their lives. They lived with compromise where love was concerned; with a mate who was better than nothing but less than everything.

“You’ve come so far. So very far.And why? Because you know in your heart this is your journey as much as it’s mine. You have to take it, or you’ll regret it for the rest of your life.”
“Which would at least be long,” Joe yelled.
“Not without power,” Noah replied. “Without power it’s over in a couple of breaths, and before you know it you’re on your deathbed thinking: Why didn’t I trust my instinct? Why didn’t I dare?”
“You talk like you know me,” Joe replied, irritated by Noah’s presumption. “You don’t.”
“Isn’t it a universal truth that men regret their lives?” Noah said. “And die wishing they could live again?”

Like all great liars, there was enough truth in what he said to make it perfectly plausible.

“I think sometimes there’s two different kinds of people in the world. Those people who understand and those who don’t. And if they don’t, it’s no use trying to explain, ‘cause it’s just beyond them, and it always will be.”

At the beginning of his career–when his investigations as a private detective had first led him into the company of the inhuman–he had entertained the delusion that he might with time help turn the tide against these forces by alerting the populous to their presence. He soon learned his error. People didn’t want to know. They had drawn the parameters of belief so as to exclude such horrors, and would not, could not, tolerate or comprehend anybody who sought to move the fences.

“Oh, maybe the best journeys are the ones with no return ticket…”

In truth, he pitied the nay-sayers; the souls too stunted or too narcissistic to revel in the magnificent minutiae that the human drama had to offer.

“There are as many dreams of war as of peace, are there not? It expresses something in the nature of your species that must be necessary.”

(It was not the first time a story of ill-matched lovers had been told, of course, but more often than not it was the couple who suffered and died, perhaps because people wanted the perfect pair snuffed out before their love could lose its perfection. Better a murdered idea, which at least kept hope alive, than one that withered with time.)

Perhaps it had been a bland life, puttering on without purpose or direction, but he’d liked its banality, now that he was denied it.

“It’s not reality that causes the trouble, Harry. It’s illusions…”

A women who would take such a risk was more dangerous than a visionary spirit.

To understand something is to have it.

“…If you don’t know what’s ahead of you, why be scared of it? There’s a lot of sense in that.”

But the Reef itself was in good working order. She sat in Grillo’s stale, windowless office for a few minutes, amazed at the amount of equipment he’d managed to pile into it: six monitors, two printing machines, four fax machines, and three walls of floor-to-ceiling shelves, all loaded down with tapes, cassettes, and box-files of notes.

Your moods signal a period of change.
The path of life shall lead upwards for you.
You are interested in higher education, whether material or spiritual.
More Fortunes >