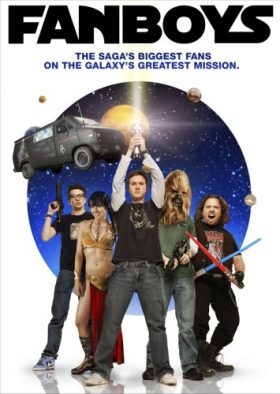 Tagline(s): Never tell them the odds.
Coming soon to our galaxy
In 1998, five friends stole their way into history.
To theaters, it will come.
Real fans don’t wait in line.

Synopsis: Fanboys is a film about Star Wars, and a cross-country road trip to see Star Wars Episode I before anyone else, by breaking into Skywalker Ranch.

“You guys both got to stop perpetuating this myth that Boba Fett is some kind of bad-ass. All right? He has a jet pack. So did the Rocketeer. Really cool. When it comes time for battle, the man’s Michael Bay – all style, no substance.” – Windows

“You gotta find your Death Star… Greatest deed Luke Skywalker ever did was take down the Death Star, right? As far as I’m concerned, that’s what everybody needs. You need that one bad-ass thing that lets you live on forever, you know.” – Hutch

“We storm the ranch or we die trying.” – Eric

“Well, if the word “copacetic” means I’m gonna rip off your tongue and lick your ass with it, then yeah, we’re copacetic.” – Roach

Head Of Security: Mr. Lucas is touched and mildly flattered by what have done here. And I have been informed that I feel the same way. So the charges are gonna be dropped. That is, of course, if you are what you appear to be.
Windows: Uh, what do we appear to be?
Head Of Security: Fanboys. Something we can easily determine with a simple quiz.

“We have to strip to Menudo?” – Linus

“The Chief likes to refer to himself in the third person. It causes confusion, especially with the bitches.” – The Chief

Windows: What fight were you watching? I was channeling the emperor.
Linus: The emperor? I don’t remember the emperor crapping his robe and screaming “time-out.”

The year is 1998 and it is a period of galactic civil war. Scratch that. There’s no civil war. That would be crazy. However, the past fifteen years have been a dark time for Star Wars fans.

But there is hope. A new Star Wars film is on the horizon. In 199 days, 3 hours, 33 minutes and 29 seconds the most anticipated movie of all time will be released.

In the remote state of Ohio, two best friends and lifelong Star Wars fans have drifted apart. Little do they know that on Halloween night, their paths will cross again…

Ever wonder why these words are flying? Maybe aliens in another galaxy will one day read this and think WTF?

sent from my iPhone.

The path of life shall lead upwards for you.
Good clothes open many doors. Go Shopping.
Even the greatest of whales is helpless in the middle of a desert.
More Fortunes >