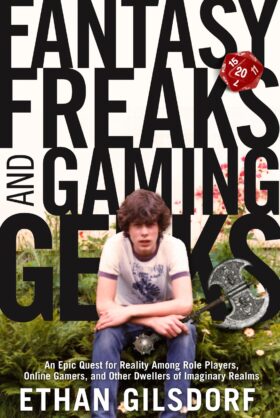 Tagline: An Epic Quest for Reality Among Role Players, Online Gamers, and Other Dwellers of Imaginary Realms

Synopsis: In this epic journey of self-discovery, we accompany the author in some of his many incarnations – Ethor, Ethorian, Ethor-An3, or just Ethan – as he travels to J.R.R. Tolkien’s old stomping grounds, New Zealand, Lake Geneva, Dragon*Con, Pennsic, Forest of Doors, Guedelon, and many more places physical, digital, and imaginary. “Who are these gamers and fantasy fans? What explains the irresistible appeal of such “escapist” adventures? And what could one man find if he embarked on a journey through fantasy world after fantasy world?”

Me, I felt about as powerful as a three-foot hobbit on a basketball team.

Like all wannabe heroes, I expected pat answers and satisfying victories.

But I kept that desire at bay by worries: that I’d enjoy the loss of self and responsibility too much; that the unreal would become more engaging than the real, and that my dormant freakishness–expressed as giddy, unselfconscious geekspeak about light sabers or hit dice–could bubble to the surface and erupt at any time–at a job interview, at a party, or on a date. Perhaps I couldn’t admit to myself that I still needed the escapist crutch of fantasy life to hobble through the real world.

Fantasy, she is not cheap.

Grognard, French for “old soldier,” used to be slang for “wargamers.” But the term has come to mean any gamer who ignores new editions of a game.

“There’s a stigma attached to gaming. We used to say, ‘We have them [gamers] until they find girls and go to college.” He looked away. “The world demands you grow up.”

Like in the movie Diner, where Steve Guttenberg’s character Eddie makes his fiancée pass a football trivia quiz before agreeing to marry her, I had wanted to gauge my girlfriend’s tolerance of me as a once and possibly future geek.

“We’re looked at as geeks and freaks, but in our culture we’re pretty lucky,” said Elyse. “We’re trying to find out what makes us whole.”

Or perhaps a yearning to be elsewhere is simply the human response to anxiety.

Who can say if any of us have fully healed from our childhood years.

“We’re all twelve-year-olds,” he joked. “Everyone is the lead role in their own movie.”

“I enjoy the fantasy and problem-solving. Engineers tend to like problem-solving, and I want my gaming experience to provide diversion and relaxation.”

An avatar was a divine teacher made incarnate on earth, or the physical manifestation of an idea.

Wouldn’t we all love to be saved by Liv Tyler? Sigh.

They can appeal to the downtrodden or disenfranchised–more than just teenage boys who are bitter or frustrated that life is a puzzle. Civilization and other strategy games give players world-building, god-like power. But even the most Neanderthal, gun-toting, FPS game delivers heroism’s baser pleasures: They make the disempowered feel powerful.

So, my fellow freaks and geeks, if we must escape, let us escape for a reason–not just to be entertained by a vast game, but because of where our heads go. Let’s escape to do something along the way. Perhaps to find the truth.

I realized in that moment that I hadn’t necessarily been escaping. Like Tolkien, I had been creating–drawing pictures, making movies, telling stories–I suppose most of my life. Which, I thought, wasn’t such a horrible way to spend all my long years after all. Perhaps I hadn’t gone so far astray. As Tolkien himself wrote, “Not all those who wander are lost.”

As one old grognard told me, “Life is just a game. If you know the rules, you can get through OK.”

As Steve Chenault told me in Lake Geneva, “Maybe it’s more important when you’re an adult to stop a little bit and have fun, than when you’re a kid. What’s that commercial? ‘Life comes at you fast.’ Stuff happens.”

Courtesy is the password to safety.
Whoever wants to reach a distant goal must take small steps.
Even the greatest of whales is helpless in the middle of a desert.
More Fortunes >