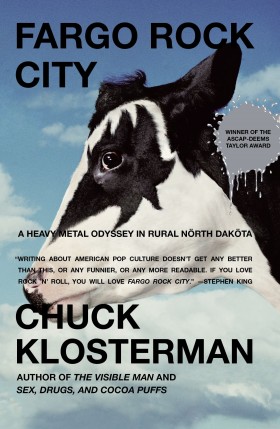 Synopsis: Empirically proving that—no matter where you are—kids wanna rock, this is Chuck Klosterman’s hilarious memoir of growing up as a shameless metalhead in Wyndmere, North Dakotoa (population: 498)

“…no one born after 1970 can possibly appreciate any creative element in rock ‘n’ roll: By 1980, there was no creativity left.”

“This is a substantial problem, because the kind of kids who truly love heavy metal evidently suck at artistic interpretation.”

“…perception, which is the tool we all use to build the context for our lives.”

“I no longer think there’s any question about whether or not pop culture swings on a pendulum between style and substance–it does.”

“…KISS made a few million kids want to pick up guitars and pretend to be someone they’re not. And that is rock ‘n’ roll, 99 percent of the time.”

“It was the song of the summer, which is the highest honor any single can achieve (regardless of its genre).”

“…the philosophy suggests that a true artist has to make his art for personal reasons, regardless of whether or not people like it (or even want it). That’s plainly stupid… Art is not intrinsic to the universe, art is a human construction. If you killed off all the world’s people, you would kill off all the art. The only thing important about art is how it affects people.”

“Talking about the music was more exciting than hearing it (which is still the way I feel about most rock ‘n’ roll).

“We have so demonized narcotics that they now seem worst than actual demons.”

“We live in an accelerated culture, but its acceleration is increased retrospectively.”

“But in this day and age, two of anything makes a trend.”

“What Guns N’ Roses tried to do (or, more accurately–what Axl Rose tried to do) was take the three ballads off Use Your Illusion I and II and become George Lucas.”

“It’s just nice to see someone doing anything.”

“I will never understand cool people.”

“The quest for musical immortality is not a simple one, and being able to do many things well is usually not as effective as doing just one thing perfectly.”

“Let’s be honest: It’s more or less taken for granted that rock bands don’t have staying power. The moment we’re born, we start dying; the moment a musician gets famous, he starts to fade into oblivion.”

“my friend Pat probably came up with the perfect explanation: ‘A guilty pleasure is something I pretend to like ironically, but in truth is something I really just like.’”

“We all want to be cool, and it’s hard for some of us to admit we’re not.”

“It’s always been my theory that criticism is really just veiled autobiography; whenever someone writes about a piece of art, they’re really just writing about themselves.”

“The one thing I wanted to show with Fargo Rocks City is that pop music doesn’t matter for what it is; it matters for what it does. The greatest thing about rock ‘n’ roll is that it’s an art form where the audience is more important than the art itself.”

Courtesy is the password to safety.
A difference, to be a difference, must make a difference.
Whoever wants to reach a distant goal must take small steps.
More Fortunes >