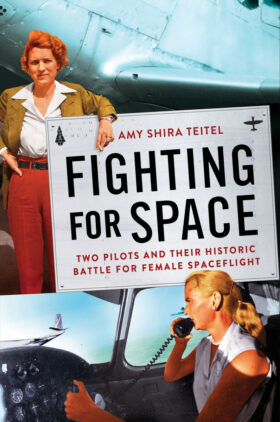 Tagline: Two Pilots and Their Historic Battle for Female Spaceflight

Synopsis: When the space age dawned in the late 1950s, Jackie Cochran held more propeller and jet flying records than any pilot of the twentieth century—man or woman. She had led the Women’s Auxiliary Service Pilots during the Second World War, was the first woman to break the sound barrier, ran her own luxury cosmetics company, and counted multiple presidents among her personal friends. She was more qualified than any woman in the world to make the leap from atmosphere to orbit. Yet it was Jerrie Cobb, twenty-five years Jackie’s junior and a record-holding pilot in her own right, who finagled her way into taking the same medical tests as the Mercury astronauts. The prospect of flying in space quickly became her obsession.

Declassified by Agent Palmer: Fighting for Space is not Jackie Cochran vs. Jerrie Cobb, but it’s a compelling duality

In the interest of exploring every avenue, I spent the better part of four years researching not only these women and the players who shaped their stories, but the media’s portrayal of women pilots, domestic and international politics, as well as the evolution of flight, spaceflight, and women’s rights.

I want you to marvel at Jackie’s daring, get swept up in Jerrie’s romance, feel the excitement of a record-breaking flight, and experience the excruciating frustration of a dream slipping away. All the women in this story are like the screen heroines of the 1930s and 1940s. They are not defined by “womanhood.” They are pilots and identified as such. They are flyers as well as wives, mothers, and businesswomen. They are incredible, multifaceted people trying to eke out their place in aviation and space while navigating love, family, and friendship, always without compromising who they are.

Jerri Sloan, however, didn’t have the same support from home. Though unsure about a space program that seemed to consist of a bunch of rockets with a tendency to explode, she thought the whole thing was exciting enough to go through the medical test.

Nothing in the world can take the place of persistence.
Let’s finish this up now, someone is waiting for you on that.
Today it’s okay to make a few choices by going with your instincts.
More Fortunes >