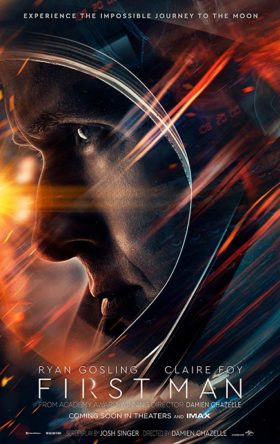 Tagline(s): The most dangerous mission in history
Experience the impossible journey to the Moon.
One giant leap into the unknown.

Based On: Based on First Man by James R. Hansen

Synopsis: A look at the life of the astronaut, Neil Armstrong, and the legendary space mission that led him to become the first man to walk on the Moon on July 20, 1969.

Declassified by Agent Palmer: As a film adaptation, First Man is Mission Accomplished

Neil Armstrong: I don’t know what space exploration will uncover, but I don’t think it’ll be exploration just for the sake of exploration. I think it’ll be more the fact that it allows us to see things. That maybe we should have seen a long time ago. But just haven’t been able to until now.

Deke Slayton: We’ve chosen a job so difficult, requiring so many technological developments, we are going to have to start from scratch.

Neil Armstrong: That’s one small step for man, one giant leap for mankind.

Janet Armstrong: What are the chances you’re not comin’ back? Those kids, they don’t have a father anymore. So you’re gonna sit the boys down. And you’re gonna prepare them for the fact that you might never come home.

Deke Slayton: Why do you think space flight is important?
Neil Armstrong: I had a few opportunities in the X-15 to observe the atmosphere. It was so thin, such a small part of the Earth that you could barely see it at all. And when you’re down here in the crowd and you look up, it looks pretty big and you don’t think about it too much. But when you get a different vantage point it changes your perspective.

Reporter: Neil, if this flight is successful, you’ll go down in history. What kind of thoughts do you have about that?
Neil Armstrong: We’re planning on the flight being successful.

Deke Slayton: Jan, you have to trust us. We’ve got this under control.
Janet Armstrong: No, you don’t. All these protocols and procedures to make it seem like you have it under control. But you’re a bunch of boys making models out of balsa wood! You don’t have anything under control!

Neil Armstrong: We need to fail down here so we don’t fail up there.

Janet Armstrong: Pat doesn’t have a husband. Those kids, they don’t have a father anymore. Do you understand what that means? What are the chances that’s going to be Ricky and Mark? And I can’t tell them that their dad spent the last few minutes packing his briefcase! You’re gonna sit them down. Both of them. And you’re going to prepare them for the fact that you might not ever come home. You’re doing that. You. Not me. I’m done.

Janet Armstrong: It’ll be an adventure.

Let’s finish this up now, someone is waiting for you on that.
Nothing in the world can take the place of persistence.
Your moods signal a period of change.
More Fortunes >