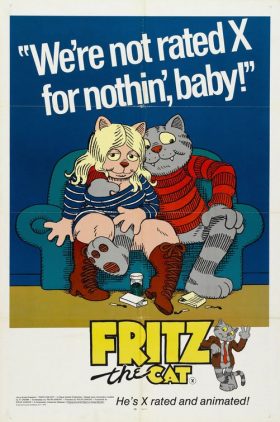 Tagline(s): The CAT that got the CREAM!
The most OUTRAGEOUS animated ADULT FILM ever made
He’s R-rated and animated! (Australia)
He’s X-Rated and Animated!
We’re not rated X for nothin’, baby!
SEE! The man eat crow! SEE! The Air Force bomb the ghetto! SEE! Fritz bite off more than he can chew! SEE! Hundreds of dirty animals!

Based On: Based characters from Robert Crumb

Synopsis: A hypocritical swinging college student cat raises hell in a satiric vision of various elements on the 1960s.

“I’ve been up and down the four corners of this big old world. I’ve seen it all and I’ve done it all. I’ve fought many a good man, and I’ve laid many a good woman.” – Fritz

“Hello men… everybody all busy studyin’ for their goddamn exams and all? Hey Fuz, how’d it go with that Dee Dee chick, huh? She’s got some bod’ you have to admit… ol’ Charlene isn’t bad either… like, wow! Heinz, you swine, ol’ buddy pig, ya groove behind Alvina and get some kicks tonight, huh? Bastards… you’d think the goddamn exams was the be-all end-all of existence… the cosmic life-force or somethin’. Can’t even say a few decent words to a guy… th’ bastards… What a bore… take some bennies an’ stay up all night with your face stuck in a bunch of books an’ your thumbs up your ass… Yes… yes… I remember the time when it was all very inspiring and enlightening… all this history and literature and sociology shit… You think learning is a really big thing an’ you become this big fuckin’ intellectual and sit around tryin’ ta out-intellectual all the other big fuckin’ intellectuals… you spend years and years with your nose buried in these goddamn tomes while out there the world is passin’ you by… and all the stuff to see and all th’ kicks an’ girls are all out there… an’ ME, a writer ad a poet who should be havin’ adventures an’ experiencing all the diversities and paradoxes and ironies of life and passin’ over all the roads of the world and digging all the cities and towns and rives and oceans… and making all them chicks! As a writer and poet it is my duty to get out there and dig the world… to swing with the whole friggin’ scene while there’s still time! My farting around days are over! From this day on I shall live every day as if yit were my last! Yes! Yes! I must do it! No more the dreary boring classes, the dismal lectures, the sitting around bullshitting with pretentious fat-assed hippies, no more the books, the spoutings of a bunch of old farts who think they know the whole goddamn score! Oh God! What have I done? I’ve set all my notes and books and stuff on fire and now I can’t study for my exams… I’ll flunk out and my folks’ll be pissed off as hell… I’ll get a blanket… the blanket’s on fire. We’d better call the fire department.” – Fritz

“You think being a crow is a big motherfucking ball? All you cats the same, man! You don’t know where it is, and you don’t have somebody to tell you where it is. You have to be where it is to find out what’s happening!” – Duke

“Why does a great actor like James Earl Jones always have to play black men?” – Winston

“You’re not supposed to dance, Ralph, ’cause you’re not Jewish!” – Pig Cop

“I see the hard facts of life! I am realistic, something you’re incapable of! You’d be better off with one of those stupid little morons like Charlene who you could just sleep with and throw away when you’re done! You can’t cope with a mature woman!” – Winston Schwartz

Blue: “Get out of the garbage cans”
Fritz: “You talking to me, Jack?”
Blue: “What the hell you doing there, anyway?”
Fritz: “Man, here we are on the brink of the apocalypse… the eve of destruction, so to speak… and I can’t think of anything to do.”
Blue: “Offhand, son, I’d say you have got a problem. But at least you’re honest. The revolution could use a man like you.”

“My soul is tormented. I’ve been up and down the four corners of this big old world. I’ve seen it all! I’ve done it all! I’ve fought many a good man, laid many a good woman. I’ve had riches and fame and adventure. Stood face to face with danger and death countless times. I’ve tasted life to the fullest… and still my soul cries out… in this hungry tortured, wrecked quest, ‘More!'” – Fritz

A difference, to be a difference, must make a difference.
You are interested in higher education, whether material or spiritual.
Today it’s okay to make a few choices by going with your instincts.
More Fortunes >