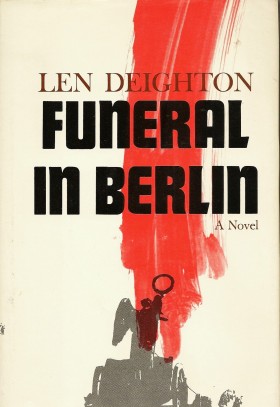 Main Character: Unnamed or Nameless Spy (a.k.a. Harry Palmer in the film versions of the series)

Synopsis: An exciting Cold War story of the Great Game.

“… for espionage is an international and artistic profession, in which opinions matter less than the art of perfidy.” -Dr. R Lewinsohn, The Career of Sir Basil Zaharoff

Few women understood how to cook eggs and bacon. Or anything else.

He rather prided himself on his ability to provide the right sort of smile for every occasion. – Robert James Hallam

He didn’t feel sorry for any girls, they were all…carnivorous

“Now don’t go metaphysical on me,” said Jean. “Whom do you feel like?”
I like that “whom”–you’ve got to pay real money these days to get a secretary that could say that.

“When men become double agents it’s just a matter of time before they lose their grip on reality. They begin to drown in a sea of confusion. Any piece of information they can snatch at will keep them afloat and alive for a few more hours.” – Dawlish

Beneath me the city lay in huge patches of light and vast pools of darkness where rubble and grass fought gently for control of the universe.

“Are you a chess player, English?” he said. [Stok]
“I prefer games where there’s a better chance to cheat,” I said.

“In Russia we have a proverb, ‘Better a clever lie than the foolish truth.’” [Stok]

Really they were mental lightweights equipped with a few thousand items of cocktail-time small talk. They wouldn’t know a string quartet from a string vest.

“One of these days, Chico,” I said, “you are going to face up to the fact that those friends of yours in what you persist in calling the War House know nothing about everything. They are as ignorant as you are. You should do something about it. Go down to the library and read a book.”
“Do you have any particular book in mind, sir?”
“Start at A or the shelf nearest the door and see what you can learn by Christmas.”

“I never joke, Chico. The truth is quite adequately hilarious.”

“Here lies the dust of Billy Paine.
Whole undisturbed may he remain.
On this date that he was slain,
Many a kind thought died in Paine.”

“Academic training is the final refuge of the untalented.”

“Marry in haste, repent at leisure…”

The greatest tribute you can pay to a secret agent is to take him for a moron. All he has to do is to make sure he doesn’t act too exactly like one.

On the wall a pendulum paced the glass confines of its cage.

There was nothing more I could do for the time being. It was just a matter of lettings matters simmer. When something came to a boil I would hear the rising steam.

“Try to make everyone happy,” I said, “and you’ll wind up a rich mediocrity; but you’ll never get anything done that is worth doing.”

“You should take a lesson from European diplomacy,” I said. “The purpose of political debate is to achieve results, not to win arguments.”

“Every Jew has won a desperate battle against the world the day he is born. For a Jew, you see, just existing”–he squeezed the word through his palate–”just existing is a triumph, a victory against fascism.”

The art of survival–the old man said–was the only Jewish art form.

“You’ve got to escalate or even quantify,
For pre-emptive counter-strateg-y-y-y-y.”

“It’s not my job to think,” said Stok. “I employ youngsters to do that; their minds aren’t so cluttered up with knowledge.”

The same thing that went wrong with lesser marriages–the image of illusion is shattered by the hammer of reality.

“…as I told the young fool tonight; ideas will infiltrate the most heavily fortified citadel.”

“All societies contain within themselves the germ of their own destruction,” Vaclav said.

“Ideas travel,” said Stok, “and there is nothing any of us can do about that except listen.”

“I must make my plans upon the basis of everyone being untrustworthy.”

“It is a well-known fact that I am an insolent intractable hooligan over whom Dawlish has only a modicum of control. Dawlish encourages this illusion. One day it will fail. Dawlish will throw me to the wolves.”

General Borg said, “The passing of time is like the passing of two trains; when you are young the other train is traveling at almost the same speed. Time hangs upon your hands. You grow older, the train gains speed slightly. Then it’s rushing by faster, faster and faster until it’s gone and you see the green countryside again/”

I said, “Most prejudice tends to operate against groups that it’s easy to recognize. It’s no accident that minorities only suffer where the prejudice has had time to develop its power of detection. Mexicans don’t have trouble in New York City; it’s down on the Mexican border they run into it. Pakistanis are honored guests in Birmingham, Alabama. It’s in Birmingham, England, that they run into prejudice.”

It pays to increase your word power.

Chapter 1
Players move alternately–only one at a time

Chapter 3
Where pieces are used to protect other pieces, there will be a high casualty rate. Better by far to assign only pawns to supporting roles.

Chapter 4
The Berlin Defense is a classic means of counterattack.

Chapter 5
When a player offers a piece for exchange or sacrifice then surely he has in mind a subsequent maneuver which will end to his advantage.

Chapter 6
A bad bishop is one hampered by his own pawns.

Chapter 7
Knights can pass over squares controlled by enemy forces. Knights always end their move on a square of the opposite color.

Chapter 8
Skillful use of knights is the mark of the professional player.

Chapter 9
In certain circumstances pawns can be converted into the most powerful unit on the board.

Chapter 11
Zugzwang: to move a chess piece under duress.

Chapter 12
Every piece has its mode of attack but only a pawn will attack en passant. Similarly only a pawn can be captured in this manner.

Chapter 13
Roman Decoy: a piece offered as bait to save a hazardous situation.

Chapter 14
J’adoube: a word used to indicate that a player intends to touch a piece but not move it.

Chapter 15
Even a pawn can make a “double attack.”

Chapter 16
Every pawn is a potential queen.

Chapter 17
A knight can be used to simultaneously threaten two widely spaced units. (This is called a “fork.”) If one of these threats is against a king the other piece must inevitably be lost.

Chapter 18
Male: a word from Old French meaning to overpower or overcome.

Chapter 19
One can escape from check by removing hostile pieces or interposing oneself.

Chapter 20
Enemy territory is that area of the board within one-move range of opposing forces.

Chapter 21
The king may well be moved to a well-protected spot away from danger.

Chapter 22
Checkmate remains the ultimate aim of every player.

Chapter 23
King’s Gambit is an opening in which his own side’s pawns are sacrificed.

Chapter 24
A skewer is an attack along a straight line. As the first piece avoids capture it exposes the second, real target to the full force of the attack.

Chapter 25
Corridor mate: when a king can only move along an expected route, he can be trapped by closing the corridor.

Chapter 26
The skilled player memorizes and uses the classic sequences of the games of the masters.

Chapter 27
Any move that attacks a hostile king is know as a check.

Chapter 28
Development for its own sake is insufficient. There must be a keen purpose in every move.

Chapter 29
Players who relish violence, aggression and movement often depend upon the Spanish Game.

Chapter 30
Range in chess is measured not by distance but by the number of squares to which a legal move can be made.

Chapter 31
Czech Defense: a sequence in which pawn is matched with pawn but the queen’s bishop tips the balance.

Chapter 33
Two hostile bishops can be used to block the advance of passed pawns since between them they control access to all squares of both colors.

Chapter 35
In medieval times it was the aim of players to annihilate every opponent instead of checkmating the king.

Chapter 36
Switchback: to return to original position in any given sequence.

Chapter 37
A committed piece is one given a specific duty. It often becomes the focal point of an opponent’s attack.

Chapter 38
A player who uses two moves to do something possible in on is said to have “lost tempo.”

Chapter 40
A king cannot be captured nor need it be removed from the board. It is enough that the king is put into a position from which it cannot escape.

Chapter 42
The Exchange: when a player sacrifices something for an opponent’s piece of lesser value he is said to be “the exchange down.”

Chapter 44
In China, Hungary, India, Korea and Poland pawns are called “foot soldiers,” but in Tibet they are called “children.”

Chapter 45
The end game: this often centers around the queening of a pawn. Here a sudden threat can arrive on home ground.

Chapter 46
Unless one is a master player the queen’s gambit–when a pawn is offered for sacrifice–is best declined.

Chapter 47
The power of a queen often encourages its use single-handed. But an unsupported queen is in a dangerous position against skillfully used pawns.

Chapter 48
Pawns can only move forward. They can never retreat.

Chapter 49
If a player is not in check but can only make a move that will place him in check; this is stalemate and is scored as a draw.

Chapter 50
Originally the piece we now call a queen was a counselor or government adviser.

Chapter 51
Repetition rule: it is a rule of chess that when the same sequence recurs three times the game can be terminated.

Things are turning for the bright side.
The path of life shall lead upwards for you.
Look forward to great fortune and a new lease on life!
More Fortunes >