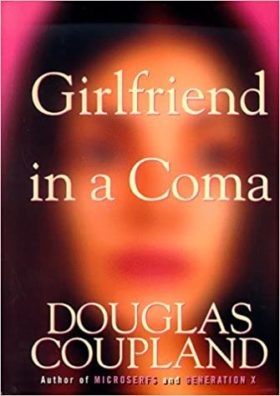 Girlfriend in a Coma

Synopsis: On a snowy Friday night in 1979, just hours after making love for the first time, Richard’s girlfriend, high school senior Karen Ann McNeil, falls into a coma. Nine months later she gives birth to their daughter, Megan. As Karen sleeps through the next seventeen years, Richard and their circle of friends reside in an emotional purgatory, passing through a variety of careers—modeling, film special effects, medicine, demolition—before finally reuniting on a conspiracy-driven super-natural television series. But real life grows as surreal as their TV show as Richard and his friends await Karen’s reawakening . . . and the subsequent apocalypse.

Declassified by Agent Palmer: Girlfriend in a Coma is another thought provoking novel from Douglas Coupland

I believe that unless a person passes through some Great Experience, that person’s life will have been for naught.

…often a quiet life of loneliness can be its own Great Experience.

Question: would I do it the same way all over again? Absolutely–because I learned something along the way. Most people don’t learn things along the way. Or if they do, they conveniently forget those things when it suits their need. Most people, given a second chance, fuck it up completely. It’s one of those laws of the universe that you can’t shake. People, I have noticed, only seem to learn once they get their third chance–after losing and wasting vast sums of time, money, youth, and energy–you name it. But still they learn, which is the better thing in the end.

Fate is for losers.

But then we were young and glibness was our armor.

I have always noticed in high school yearbooks the similarity of all the graduate write-ups–how after only a few pages, the identities of all the unsullied young faces blur, how one person melts into another and another: Susan likes to eat at Wendy’s; Donald was on the basketball team; Norman is vain about his varsity sweater; Gillian broke her arm on Spring Retreat; Brian is a car nut; Sue wants to live in Hawaii; Don wants to make a million and be a ski bum; Noreen wants to live in Europe; Gordon wants to be a radio deejay in Australia. At what point in our lives do we stop blurring? When do we become crisp individuals? What must we do in order to end these fuzzy identities–to clarify just who it is we really are?

I didn’t realize then that so much of being adult is reconciling ourselves with the awkwardness and strangeness of our own feelings.

Youth is the time of life lived for some imaginary audience.

“Imagine you’re a forty-year-old, Richard” Hamilton said to me around this time, while working as a salesman at a Radio Shack in Lynn Valley, “and suddenly somebody comes up to you saying, ‘Hi, I’d like you to meet Kevin. Kevin is eighteen and will be making all of your career decisions for you.’ I’d be flipped out. Wouldn’t you? But that’s what life is all about–some eighteen-year-old kid making your big decisions for you that stick for a lifetime.”

What if we were to die right there? What had our lives been? What had our ambitions been? What had we been seeking? Money? No-none of us seemed financially motivated. Happiness? We were so young that we didn’t even know what unhappiness could be. Freedom? Perhaps. And overriding principle of our lives then was that infinite freedom creates a society of unique, fascinating individuals. Failure at this would mean failure of our societal duty. We were young; obviously we wanted meaning from life. I felt a craving for duty, but to what?

I was getting–we were getting–no younger, yet for some reason not particularly wiser.

“I read this study,” Wendy said. “The researchers learned that no matter how hard you tried, the most you could possibly change your personality–your self–was five percent.”

I’m getting old; it’s becoming harder and harder to be a unique individual.

She remembers the innocent pointless aims of their youths.

Friends and family want to protect Karen and her innocence from the modern world, the changes that have occurred since her sleep began. Her innocence is the benchmark of their jadedness and corruption. The world is hard now. The world doesn’t like simplicity or relaxation.

“Hamilton, but what about you–are you new and improved and faster and better, too? I mean, as a result of your fax machine?”
“It’s swim or drown, Kare. You’ll get used to them.”
“Oh, will I?”
“It’s not up for debate. We lost. Machines won.”

A certain nobility is demanded–extreme wisdom through extreme suffering.

“Okay. You know what, Hamilton? There’s a hardness I’m seeing in modern people. Those little moments of goofiness that used to make the day pass seem to have gone. Life’s so serious now. Maybe it’s just because I’m with an older gang now.” She lifts her scrawny arms and nibbles her finger and the act is a large effort on her part. “I mean, nobody even has hobbies these days. Not that I can see. Husbands and wives both work. Kids are farmed out to schools and video games. Nobody seems to be able to endure simply being by themselves, either–but at the same time they’re isolated. People work much more, only to go home and surf the Internet and send e-mail rather than calling or writing a note, or visiting each other. They work, watch TV, and sleep. I see these things. The whole world is only about work: work work work get get get . . . racing ahead . . . getting scaled from work . . . going online . . . knowing computer languages . . . winning contracts. I mean, it’s just not what I would have imagined the world might be if you’d asked me seventeen years ago. People are frazzled and angry, desperate about money, and, at best, indifferent to the future.”

She doesn’t tell Hamilton that she had expected people to be grown up at the age of thirty-four. Instead, they seem at best insular and without a central core, which might give purpose to their lives.

“How obvious. I should have known.”
“This is not a very good time or place for sarcasm, Richard.”
“It’s called irony these days.”
“Whatever.”

Could you all put your personalities on hold for just two minutes?

Parents.
They were the engines and the rudders of suburban life.

A lack of convictions—of beliefs, or wisdom, or even of good old badness. No sorrow; no nothing. People–the people I knew–when I came back they only, well, existed. It was so sad. I couldn’t allow myself to tell them.”

“I know– I remember when I first woke up how people kept on trying to impress me with how efficient the world had become. What a weird thing to brag about, eh? Efficiency. I mean, what’s the point of being efficient if you’re only leading an efficiently blank life?

I think it’s human to confuse history with time.

“Always these eternal mysteries,” says Linus. “I don’t think human beings were meant to know so much about the world. All this time and all this exposure to every conceivable aspect of life–wisdom so rarely enters the picture. We barely have enough time to figure out who we are and then we become bitter and isolated as we age.”

Exposing hypocrisy in itself doesn’t make you a moral person…

We really don’t seem to have any values, any absolutes. We’ve always maneuvered our values to suit our immediate purposes. There’s nothing large in our lives.”

“…I mean, look at us: Instead of serving a higher purpose we’ve always been more concerned with developing our ‘personalities.” and with being ‘free.’”

“Nobody we knew had a second of free time remaining. All of it was frittered away on being productive, advancing careers and being all-around efficient. Each new advance made by ‘progress’ created its own accelerating warping effect that made your lives here on earth feel even smaller and shorter and more crazed…”

“People elsewhere–people who didn’t have our Boy-in-the-Bubble lifestyle–they looked at us and our freedoms fought for by others, and these people expected us with our advantages to take mankind to the next level . . . newer, smarter, innovative ways of thinking and living and being. They looked at us and hoped we could figure out what comes . . . next.”

“Every day for the rest of your lives, all of your living moments are to be spent making others away of this need–the need to probe and drill and examine and locate the words that take us to beyond ourselves.”

…people everywhere on Earth, eager, no desperate for just the smallest sign that there is something finer or larger or more miraculous about ourselves than we had supposed.

We’ll draw our line in the sand and force the world to cross our line. Every cell in our body explodes with the truth. We will be kneeling in front of the Safeway, atop out-of-date textbooks whose pages we have chewed out. We’ll be begging passersby to see the need to question and question and question and never stop questioning until the world stops spinning. We’ll be adults who smash the tired, exhausted system. We’ll crawl and chew and dig our way into a radical new world. We will change minds and souls from stone to plastic into linen and gold–that’s what I believe. That’s what I know.

Nothing in the world can take the place of persistence.
Your moods signal a period of change.
To let another into your heart, first let yourself in.
More Fortunes >