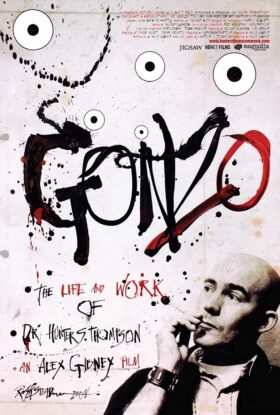 Tagline(s): The Life and Work of Dr. Hunter S. Thompson

Synopsis: A portrait of the late gonzo journalist Hunter S. Thompson as narrated by Johnny Depp in Thompson’s own works.

Declassified by Agent Palmer: ‘Gonzo’ Reminds Us That Hunter S. Thompson is Far Greater Than ‘Fear’

“A giant of the written word has died. Hunter S Thompson was a lot of things–a journalist, an author, a patriot, a professional troublemaker, a complex walking monument to misbehavior who apparently took his own life with a gun last night.”

“The Edge… There is no honest way to explain it because the only people who really know where it is are the ones who have gone over. The others-the living-are those who pushed their control as far as they felt they could handle it, and then pulled back, or slowed down… But the edge is still out there.”“

“Hunter reminds me so much of Mark Twain. He was a reporter–Twain started out as a reporter–with a wild imagination and he’s not trying to fool you. You know immediately that he is filtering reality through what Hunter called ‘Gonzo.’”

“I know it’s in my interest, maybe in the interest of greatest good for me to smoke a joint and calm down.“

Your moods signal a period of change.
Today it’s okay to make a few choices by going with your instincts.
Nothing in the world can take the place of persistence.
More Fortunes >