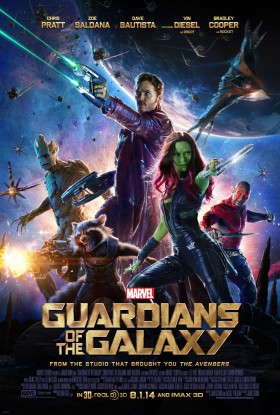 Guardians of the Galaxy

Tagline(s): You’re Welcome
All heroes start somewhere.
When things get bad, they’ll do their worst.
From the studio that brought you “The Avengers”

Based On: Guardians of the Galaxy Comic Books

Synopsis: A group of intergalactic criminals are forced to work together to stop a fanatical warrior from taking control of the universe.

Declassified by Agent Palmer: A Spoiler Free Movie Review of Guardians of the Galaxy

Groot: I am Groot.

Gamora: It’s dangerous and illegal work, suitable only for outlaws.
Peter Quill: Well, I come from a planet of outlaws: Billy the Kid, Bonnie and Clyde, John Stamos.

Rocket Raccoon: But Quill, beating Ronan… it can’t be done. You’re asking us to die.
Peter Quill: Yeah… I guess I am.
Gamora: Quill, I have lived most of my life surrounded my enemies. I will be grateful to die among my friends.
Drax the Destroyer: You’re an honorable man, Quill. I will fight beside you. And in the end, I will see my wife and daughter.
Groot: I am Groot.
Rocket Raccoon: Aww, what the hell, I don’t got that long a lifespan anyway… Well now I’m standing. Happy? We’re all standing now. Bunch of jackasses, standing in a circle.

Groot: I am Groot.
Peter Quill: Well that’s just as fascinating as the first 89 times you told me that. What is wrong with Giving Tree here?
Rocket Raccoon: Well he don’t know talkin’ good like me and you, so his vocabulistics is limited to “I” and “am” and “Groot,” exclusively in that order.
Peter Quill: Well I tell you what, that’s gonna wear real thin, real fast, bud.

Peter Quill: If we’re gonna work together you might wanna try trusting me a little bit.
Gamora: How much do you trust me?

Gamora: I know who you are, Peter Quill, and I am not some starry-eyed waif here to succumb to your… your pelvic sorcery!

Rocket Raccoon: Fine, but I can’t promise when all of this is over I’m not going to kill every last one of you jerks.
Peter Quill: See, this is exactly why none of you have any friends!

Gamora: I am going to die surrounded by the biggest idiots in the galaxy.

Rocket Raccoon: His people are completely literal. Metaphors go over his head.
Drax the Destroyer: *Nothing* goes over my head…! My reflexes are too fast, I would catch it.

Gamora: I’m a warrior, an assassin. I don’t dance.
Peter Quill: Really? Well, on my planet, we have a legend about people like you. It’s called Footloose. And in it, a great hero, named Kevin Bacon, teaches an entire city full of people with sticks up their butts that, dancing, well, is the greatest thing there is.
Gamora: …Who put the sticks up their butts?

Rocket Raccoon: No, Groot! You’ll die! Why are you doing this? Why?
Groot: *We* are Groot.

Peter Quill: What should we do next: Something good, something bad? Bit of both?
Gamora: We’ll follow your lead, Star-Lord.
Peter Quill: A bit of both!

Even a broken clock is right two times a day.
Let’s finish this up now, someone is waiting for you on that.
Today it’s okay to make a few choices by going with your instincts.
More Fortunes >