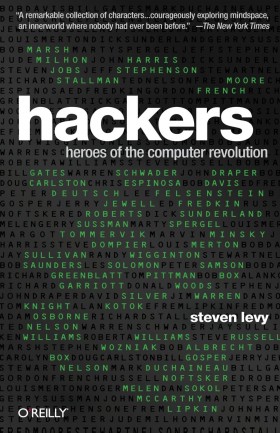 Synopsis: This 25th anniversary edition of Steven Levy’s classic book traces the exploits of the computer revolution’s original hackers — those brilliant and eccentric nerds from the late 1950s through the early ’80s who took risks, bent the rules, and pushed the world in a radical new direction. With updated material from noteworthy hackers such as Bill Gates, Mark Zukerberg, Richard Stallman, and Steve Wozniak, Hackers is a fascinating story that begins in early computer research labs and leads to the first home computers.

Levy profiles the imaginative brainiacs who found clever and unorthodox solutions to computer engineering problems. They had a shared sense of values, known as “the hacker ethic,” that still thrives today. Hackers captures a seminal period in recent history when underground activities blazed a trail for today’s digital world, from MIT students finagling access to clunky computer-card machines to the DIY culture that spawned the Altair and the Apple II.

Declassified by Agent Palmer: Hackers: Heroes of the Computer Revolution by Steven Levy a Defense of the Unconventional Hero

“Shaving off an instruction or two was almost an obsession with them,,, They got the same kind of primal thrill from “maximizing code” as fanatic skiers got from swooshing down a hill.”

“What was a computer but something that benefited from a free flow of information?”

”Bureaucrats hide behind arbitrary rules (as opposed to the logical algorithms by which machines and computer programs operate(: they invoke those rules to consolidate power, and perceive the constructive impulse of hackers as a threat.”

“If IBM had its way (so the TMRC hackers thought), the world would be batch processed, laid out on those annoying little punch cards, and only the most privileged of priests would be permitted to actually interact with the computer.”

“Peter Samson later said, ‘We did it twenty-five to thirty percent for the sake of doing it because it was something we could do and do well, and sixty percent for the sake of having something which was in its metaphorical way alive, our offspring, which would do things on its own when we were finished. That’s the great thing about programming, the magical appeal it has… Once you fix a behavioral problem [a computer or program] has, it’s fixed forever, and it is exactly an image of what you meant.’”

“the world opened up by the computer was a limitless one.”

“And wouldn’t everyone benefit even more by approaching the world with the same inquisitive intensity, skepticism toward bureaucracy, openness to creativity, unselfishness in sharing accomplishments, urge to make improvements, and desire to build as those who followed the Hacker Ethic?”

“Wouldn’t we benefit if we learned from computers the means of creating a perfect system, and set about emulating that perfection in a human system? If everyone could interact with computers with the same innocent, productive, creative impulse that hackers did, the Hacker Ethic might spread through society like a benevolent ripple, and computers would indeed change the world for the better.”

“‘understanding hardware’ was akin to fathoming the Tao of physical nature.”

“As for royalties, wasn’t software more like a gift to the world, something that was reward in itself?”

“Anyway, people shouldn’t have to pay for software–information should be free!”

“John McCarthy illustrated that belief when he said that the natural state of man was to be online to a computer all the time. ‘What the user wants is a computer that he can have continuously at his beck and call for long periods of time.’”

“‘He [Stewart Nelson] approached problems by taking action… There’s a lot of problems in the world which can really be solved by applying two or three times the persistence that other people will.’”

“Nelson was displaying an extension of the Hacker Ethic–if we all acted on our drive to discover, we’d discover more, produce more, be in control of more.”

To a hacker, a closed door is an insult, and a locked door is an outrage. Just as information should be clearly and elegantly transported within a computer, and just as software should be freely disseminated, hackers believed people should be allowed access to files or tools which might promote the hacker quest to find out and improve the way the world works, When a hacker needed something to help him create, explore, or fix, he did not bother with such ridiculous concepts as property rights.

Even if no tools were behind locked doors, the locks symbolized the power of bureaucracy, a power that would eventually be used to prevent full implementation of the Hacker Ethic.

…an important corollary of hackerism states that no system or program is ever completed. You can always make it better. Systems are organic, living creations: if people stop working on them and improving them, they die.

Instead of the battle-strewn imagery of shoot-’em-up space science fiction that pervaded Tech Square, the Stanford imagery was the gentle lore of elves, hobbits, and wizards described in J.R.R. Tolkien’s Middle Earth trilogy.

This second generation was hardware hackers, and the magic they would make in California would build on the cultural foundation set by the MIT hackers to spread the hacker dream throughout the land.

…Resource One collective, formed of people “who believe that technological tools can be tools of social change when controlled by the people.”

Lee [Felsenstein] considered the computer itself a model for activism and hoped the proliferation of computers to people would, in effect, spread the Hacker Ethic throughout society, giving the people power not only over machines but over political oppressors.

On the hacker’s obsessive passion “It’s where every man can be a god,” Les Solomon would say.

What would come out of these systems [MITS’ Altair] was not as important as the act of understanding, exploring, and changing the systems themselves–the act of creation, the benevolent exercise of power in the logical, unambiguous world of computers, where truth, openness, and democracy existed in a form purer than one could find anywhere else.

The people in Hombrew were a mélange of professionals too passionate to leave computing at their jobs, amateurs transfixed by the possibilities of technology, and techno-cultural guerrillas devoted to over-throwing an oppressive society in which government, business, and especially IBM had relegated computers to a despised Priesthood.

Why should there be a barrier of ownership standing between a hacker and a tool to explore, improve, and build systems?

Computers had become the jewel of the economy, the only area of real growth in a recessionary period. [1982]

The Hacker Ethic had met the marketplace. [Software and the second generation]

So he came to dislike Dick, with all his schedules and fixation on managerial details–obstacles to the free flow of information.

After all, once you get waist-deep into a discussion about the meaning of the word “any,” it’s only a short step to thinking philosophically about existence itself.

This was the computer world, where packaging didn’t matter. What mattered was the magic that happened when all those binary connections were made. Marketing was second to substance.

As companies like On-Line wrote and sold more programs, people who had no desire to become programmers, let alone hackers, began to buy computers, intending only to run packaged software on them., In a way, this represented a fulfillment of the hacker dream–computers for the masses, computers like record players: you’d go to the software store, choose the latest releases, and spin away.

“put together a printed package full of promises and dreams to prospective software superstars. Oddly, the enticements that On-Line offered had little to do with the Hacker Ethic.”

It was quite a transformation from the days when a hacker would be more than satisfied to see someone appreciate the artistry in his software.

The Third Generation lived with compromises in the Hacker Ethic that would have caused the likes of Greenblatt and Gosper to recoil in horror. IT all stemmed from money.

Hackers hated the fact that copy-protection disks could not be altered. You couldn’t even look at the code, admire tricks and learn from them, modify a subroutine that offended you, insert your own subroutine … You couldn’t keep working on a program until it was perfect.

Hunter S. Thompson: “When the going gets weird, the weird turn pro.”

“I think that hackers–dedicated, innovative, irreverent computer programmers–are the most interesting and effective body of intellectuals since the framers of the U.S. Constitution … No other group that I know of has set out to liberate a technology and succeeded. They not only did so against the active disinterest of corporate America, their success forced corporate America to adopt their style in the end. In reorganizing the Information Age around the individual, via personal computers, the hackers may well have saved the American economy … The quietest of all the ‘60s sub-subcultures has emerged as the most innovative and powerful.” – Stewart Brand, Founder, Whole Earth Catalog

But Graham has found that hacking’s values aren’t threatened by business–they have conquered business. Seat-of-the-pants problem solving. Decentralized decision making. Emphasizing quality of work over quality of wardrobe. These are all hacker ideals, and they have all infiltrated the working world.

Courtesy is the password to safety.
Let’s finish this up now, someone is waiting for you on that.
Even the greatest of whales is helpless in the middle of a desert.
More Fortunes >