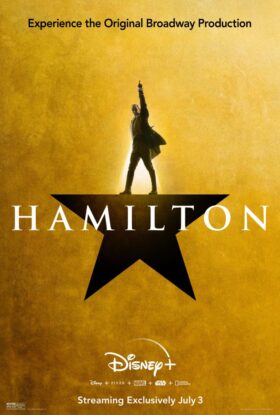 Synopsis: The real life of one of America’s foremost founding fathers and first Secretary of the Treasury, Alexander Hamilton. Captured live on Broadway from the Richard Rodgers Theater with the original Broadway cast.

Declassified by Agent Palmer: Hamilton is What We Need, Perhaps when we Need it the Most

King George: Ladies and gentlemen, this is your king, George III. Welcome to Hamilton. At this time, please silence all cell phones and other electronic devices. All photography and video recording is strictly prohibited. Thank you, and enjoy my show.

Aaron Burr: Alexander, rumors only grow. And we both know what we know.

Aaron Burr: Hamilton’s out of control.
James Madison: This is great. He’s out of power, he holds no office, and he just destroyed President John Adams, the only other significant member of his party.
Thomas Jefferson: Hamilton is a host unto himself. As long as he can hold a pen, he’s a threat. Let’s let him know what we know.

Aaron Burr: Life doesn’t discriminate, between the sinners and the saints. It takes and it takes and it takes. And we keep on living anyway. We rise and we fall. We fall and we break. And we make our mistakes. And if there’s a reason why I’m still alive when so many have died – then I’m willing to… wait for it.

Aaron Burr: Alexander joins forces with James Madison and John Jay to write a series of essays defending the new United States Constitution entitled “The Federalist Papers”. The plan was to write a total of 25 essays, the work divided evenly between the three men. In the end, they wrote 85 essays in the span of six months. John Jay got sick after writing five. James Madison wrote 29. Hamilton wrote the other 51!

Good clothes open many doors. Go Shopping.
Let’s finish this up now, someone is waiting for you on that.
You are interested in higher education, whether material or spiritual.
More Fortunes >