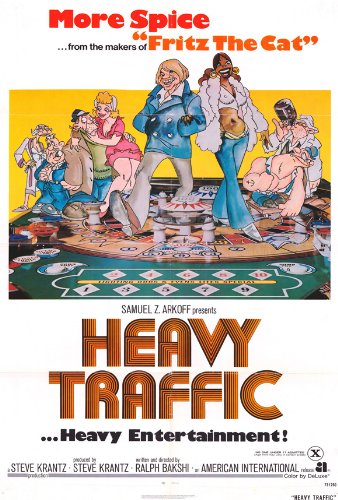 Tagline(s): Heavy Entertainment!
More Spice from the makers of Fritz the Cat!
It’s animated, but it’s not a cartoon. It’s funny, but it’s not a comedy. It’s real. It’s unreal. It’s heavy.
The amorous life and misadventures of a virginal young pinball player…his Chicks…his Chums and a host of assorted weirdos in all colors.

Synopsis: An underground cartoonist contends with life in the inner city, where various unsavory characters serve as inspiration for his artwork.

Carole: Listen, Michael. Uh, first thing in the morning, we will take them big-ass drawings of yours up to one of them big cartoon syndicates. You can sell ’em, we’ll get some bread, get our clothes out of Angie’s house and split for San Francisco. And Shorty can’t roll that far.
Michael: I’m gonna tell you, Carole, I don’t wanna sell my cartoons to one of them places. They, uh – they ain’t gonna buy that crap anyway. I’m an underground cartoonist. That’s – that’s where I belong.

“Listen, mother, we just got to get it together. A couple of jobs ain’t nothin. This world ain’t gonna drop its drawers easy for you, just like you think I’m gonna do for you. And I’ve been playing easy games, bringing you along slow. But seein’ as how you don’t know a friend when you sees one, let’s see the kind of balls you got for a real man’s game. Okay, creep?” – Carole