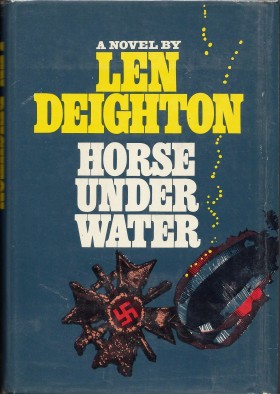 Main Character: Unnamed or Nameless Spy (a.k.a. Harry Palmer in the film versions of the series, though this is the one book in the series not adapted into a film.)

Synopsis: The plot centres on retrieving items from a Type XXI U-boat sunk off the Portuguese coast in the last days of World War II. Initially, the items are forged British and American currency, for financing a revolution in Portugal on the cheap. Later, it switches to heroin (the “Horse” of the title), and eventually it is revealed that the true interest is in the “Weiss list” — a list of Britons prepared to help the Third Reich set up a puppet government in Britain, should Germany prevail. Thrown into the mix is secret “ice melting” technology, which could be vital to the missile submarines then beginning to hide under the Arctic sea ice.

Declassified by Agent Palmer: With Horse Under Water Len Deighton Scores Another Huge Success in the Spy Genre

“Physical comfort is just a state of mind…”

“Are you going out of your mind?”
“Just into my second childhood,”

“The day the Government hands out explanations is the day after husbands start telling their wives where they’ve been.”

Around her were scattered the brightly colored record sleeves that are the folk art of the new world.

“I can’t make it fit together,” I said, “and some things are too convenient.”
“Convenience is just a state of mind,” said Dawlish. “It’s understanding that’s important. Understanding the symptoms you encounter will refer you to just one disease. You find a man with a pain in the foot and the finger and you wonder what he could possibly be suffering from with two such disparate symptoms. Then you find that while holding a nial one day he hit his finger with a hammer, then dropped it on his toe.”

“O.K., but don’t ever hanker after tidiness. Don’t ever think or hope that the great mess of investigation that we work on is suddenly going to resolve itself like the last chapter of a whodunnit…”

…but diligence brings more agents to pensionable age than bravery ever did.

…the tactics of bureaucracy–and don’t ever imagine it’s not important.

‘Inclined to pursue developments beyond requirements out of curiosity. He must be made to understand that curiosity is a dangerous failing in an agent.’

“don’t give me that ‘fatal’ stuff because I’ve taken a postgraduate course in fatality.”

”Power is like a fried egg,” I told him. “No matter how equally you try to divide it someone is sure to get most.”

It was alarming that so few people told me the truth.

“I compliment him about it. It’s something you’ve never heard about, but among civilized people compliments are all the rage. Try, someday.”
“My compliments tend to oversteer,” I told her, “and I end up in a ditch backwards.”
“You should try a touch of brake before changing direction.”
“You win,” I said. She always wins.

The truth varies in inverse proportion to the influence of the person concerned.

“We all got problems…and problems obey the laws of perspective; they look big close to.”

“You know how money is… It’s as tricky as uranium but ten times more dangerous. It disappears like youth or multiplies like enemies.”

“Yeah, it took me a lot of time and talent to make those enemies.”

“Oh, I know that you have a thousand reasons for not slipping up, but remember that the man who fell of the Empire State Building said to a resident on the first floor as he fell past him, ‘So far so good.’”

“You as a scientist know that you start an experiment to find a coefficient of expansion and end up with control of the world.”

The path of life shall lead upwards for you.
Even the greatest of whales is helpless in the middle of a desert.
A difference, to be a difference, must make a difference.
More Fortunes >