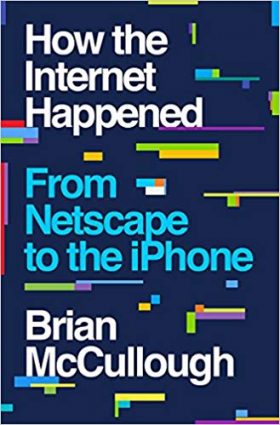 How the Internet Happened

Tagline: From Netscape to the iPhone

Declassified by Agent Palmer: How the Internet Happened by Brian McCullough is a brilliant book about the story of the Internet Era

The Internet, especially the World Wide Web, finally brought computers into the mainstream. The Internet is the reason that computers actually became useful for the average person. The Internet is the thing that made a computer something you check in with daily, even hourly. And that is what this book is about: how the web and the Internet allowed computers to infiltrate our everyday lives. This is not a history of the Internet itself, but rather, a history of the Internet Era, that period of time from roughly 1992 through 2008 when computers and technology itself stopped being esoteric and started becoming vital and indispensable. It is about great technologies and disruptions and entrepreneurs. It is about how we allowed these technologies into our lives, and how these technologies changed us.

There are occasionally events that signal the arrival of a new force in culture (say, the Beatles on The Ed Sullivan Show) or serve as the demarcation line between historical eras (September 11, 2001, for example). The Netscape IPO was just such a moment in time. Today, young twenty-somethings dream of coding their way to billion-dollar fortunes. Today, the phone in your pocket is more powerful than every computer involved in the moon landing. Today, it’s possible to know, in real time, what your high school crush had for lunch. Netscape set the groundwork for this reality. The Netscape IPO was the big bang that started the Internet Era. That picture of a barefoot Marc Andreessen on the cover of Time was what started young geeks dreaming of Silicon Valley riches. Netscape would not define the Internet Era–or even survive it–but it was the first of its kind, and in many ways it was the template for all the people and companies that would follow.

The company that would become Netscape was the first web company, the first true dot-com. In so many ways, it blazed a trail and set a template for what we think of as a modern technology startup.

“There was a huge movement to play multiplayer Doom [in the office],” remembers Rob McCool, referencing the then-popular first-person shooter video game. “It got to the point where they started having to threaten disciplinary action; making policies of no gaming before 5 P.M. and that kind of stuff.”

As the journalist and author Michael Lewis described it later, “You had to show that you were the company not of the present, but of the future. The most appealing companies became those in a state of pure possibility.”

Prodigy’s conundrum…”They thought they’d make revenues from people making purchases. But they discovered people were less interested in shopping on the service than communicating. And hey didn’t know how to charge for communications.”

“Their attitude toward the Web is a little grouchy,” an industry researcher said of AOL at the time. “They have a hard time getting past their own resentment that this disorganized cousin is taking over in the public’s mind. But it is a bias against inescapable realities.”

“The next big thing always starts out dismissed as a ‘toy.’”

It’s conceptually jarring to realize that a medium and an industry that we think of as being so futuristic and technological is sustained by a business model that is centuries old.

There were many different early web search engines and tools, and they all had varying degrees of utility.*

*Pinning down which one was the first is open to debate. For the sake of brevity and clarity we can focus on those that were the longest-lasting and actually let to websites that would become familiar to everyday web surfers.

It would become an article of faith during the dot-com era that being early to market on the Internet frontier conferred a magical “first-mover advantage” on whomever was so fortunate.

…perhaps the longest-lasting legacy of Netscape Navigator setting the standard for the early web is that, to this day, SSL, via its descendant, TLS, enables the vast majority of online commercial transactions worldwide.

“Nobody wants to head about a thirty-year-old genius who wanted to create a perfect market. They want to hear he did it for his fiancee.” – Mary Lou Song on the myth around eBay’s founding…

Economic output is easy to measure when you can count widgets coming off an assembly line. But when your “economic revolution: is built around thoughts and ideas, and the speedy new ways you’re connecting them all together, how do you quantify the value of those innovations?

Far from being a fad, the habits Americans acquired during the bubble era ingrained themselves into the rhythms of everyday life. The dot-coms, the training wheels for the Internet, the pioneers, they all taught us to live online. We all might have jumped from dial-up to broadband, but few of us quit using the net. There was no going back.

Thanks to Brin’s math (largely linear algebra and something about the eigenvector of a weighted link matrix, for those who know what that means), citations from obviously important websites were more valuable than others.

More than anything, Google’s success provided the template to make these new ideas profitable. Just as with the Netscape IPO nearly a full decade before, a new generation took notice: there was fire in Silicon Valley again.

The new postbubble web was about the users and the content in equal measure. It was about spontaneous impulses like “sharing” and self-organizing schemes like “tagging” and taxonomies. It was about how the content created by and for the hoi polloi often ended up being more engaging and exciting than the content that was prepackaged or professionally produced. And increasingly, the new web was about the collective “wisdom” of the crowd to create and organize the anarchy.

Social networking might seem like a dead-obvious concept in retrospect, but that’s only because we’ve gone through the looking glass into a modern world where the boundaries between our online lives and “real life” have been broken down almost completely.

In the technology world, the ultimate success of a new idea is very much dependent on timing.

General Magic was an Apple spin-out that Pierre Omidyar of eBay; Tony Fadell, the father of the iPod; and Andy Rubin, the inventor of the Android operating system, all worked at before going on to fame and fortune elsewhere.

“Instead of being this awesome Alexander Graham Bell moment,” Grignon recalled that the first iPhone call was anticlimactic, “it was just like, ‘Yeah, fuck it, go to voicemail.’”

Courtesy is the password to safety.
Look forward to great fortune and a new lease on life!
Even the greatest of whales is helpless in the middle of a desert.
More Fortunes >