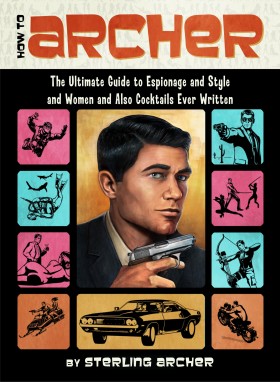 How to Archer: The Ultimate Guide to Espionage, Style, Women and Cocktails Ever Written

Tagline: The Ultimate Guide to Espionage, Style, Women and Cocktails Ever Written

Synopsis: Lying is like 95% of what I do. But believe me: in this book, I’ll let you know exactly how to become a master spy just like me. Obviously, you won’t be as good at it as I am, but that’s because you’re you, and I’m Sterling Archer.

I know, I know, it sucks not being me.

But don’t beat yourself up about it, because I’m going to show you all the good stuff—what to wear; what to drink; how to seduce women (and, when necessary, men); how to beat up men (and, when necessary, women); how to tell the difference between call girls and hookers (hint: when they’re dead, they’re just hookers) and everything about weapons, secret devices, lying ex-girlfriends, and turtlenecks. In a word? How to Archer.

Declassified by Agent Palmer: An Honest Review of How to Archer: The Ultimate Guide to Espionage, Style, Women, and Cocktails Ever Written by Sterling Archer

“A how-to book?! A book can’t teach someone how to be equal parts deadly and sexy! That’s like asking a cobra to write a book about how to be a cobra!”

And so I ask you: what do you think’s going to happen when I go mano a mano with some enemy agent who’s read the trade secrets of Sterling Archer, the world’s greatest secret agent? Answer: I will shoot him in the face.

And while there are many things to like about being a devastatingly handsome, martini-drinking, jet-setting, model-banging, world’s greatest secret agent. hard work isn’t one of them.

Thus, for the first time ever, I will now reveal many of the secret techniques which have helped make me, Sterling Archer, the world’s greatest secret agent. In the world.

I have not actually trained in karate, which I’ve often been quoted as calling “the Dane Cook of martial arts.” However, I believe that Dane Cook has since become the Dane Cook of comparisons, so that now the joke has lost all meaning.

But when it comes to fighting, who better to learn from than a people who have been beset, on all sides and for millions of years, by enemies who want nothing more than their complete and utter annihilation? Answer: the Jews.

whenever possible, avoid unarmed combat. Because there’s no sense breaking your hand on an enemy’s head when you can just put a bullet in it. In fact, while you’re at it, go ahead and double-tap that poor bastard: it’s not like there’s a bullet shortage.

I personally am not willing to sacrifice style for a teeny little bit of extra stopping power.

While the flare gun—also known as a Very pistol—was originally designed for use as a signaling device, you can also use it to shoot people. People who then catch on fire.

I’m on the fence about smartphones. Call me a romantic, but there’s just something about a tiny Minox camera or a tape recorder concealed in a fountain pen that just sends me.

Packed with the vitamins and minerals I need to make it through a strenuous day of secret agenting, plus plenty of vodka (which I just want), the Bloody is the cornerstone upon which Woodhouse builds my sumptuous breakfasts.

Martini I think I’ve made my stance on acceptable martini ingredients pretty clear. Although, in a certain other (lame British) secret agent’s defense, I do have to admit that the earliest version of his so-called “martini” was actually fairly non-vaginal, as it contained both gin and vodka and a great big shot of Lillet Blonde. And also a slice of lemon peel, which, whatever, but two or three of those bastards, and your liver will definitely know that you’re expecting great things from it.

However, I think I’ve also made it pretty clear that I don’t like to invite comparison to He-Who-Must-Not-Be-Named. And so here is Sterling Archer’s recipe for a martini. Deal.

(Just to be contrary; it makes no difference whether it’s shaken or stirred, and only a colossal idiot believes otherwise.)

Sloe Gin Fizz Chances are you’ve been misspelling this your entire life. I know I have. And now that I think about it, I actually will probably continue to do so. Because “phizz” just looks cooler to me.

I will now attempt to explain to you how to not walk around looking like a complete and utter dickbrain.

ARCHER FUN FACT: THIS BOOK I only have to write twelve thousand more words. Blah blah blah blah. There’s four of them.

Belts: The belt loops on your bespoke suits will determine the width of your custom belts, which should be handcrafted from some type of animal hide that you’re embarrassed to even say out loud (a fawn, a newborn calf, a koala bear, etc.).

Cuff links: As with all choices concerning personal style, you should strive for understated elegance.

Because the only place you should ever buy shoes, in the universe and beyond, is Italy.

And that’s not even accurate: you shouldn’t even buy shoes. You should have them made.

Which makes it difficult—if not impossible—for me to give a normal human man, like yourself, any practical advice on the matter. That would be akin to a majestic white Bengal Tiger trying to teach you how to be more majestic. Or how to be heterozygous for a specific recessive gene.

ANDORRA This tiny principality is actually a co-principality, meaning it’s ruled by two princes. Which makes me wonder: What ever happened to the Spin Doctors? Were they all murdered?

XYLOPHONIA Not a real country. If it were, I bet its national anthem would be “Dem Bones.” Played by a grinning skeleton on his own ribs. Which is why we should launch a preemptive strike now.

HOW TO ARCHER. Copyright © 2011 by FX Network, LLC. All rights reserved under International and Pan-American Copyright Conventions. By payment of the required fees, you have been granted the nonexclusive, nontransferable right to access and read the text of this e-book on-screen. No part of this text may be reproduced, transmitted, downloaded, decompiled, reverse-engineered, or stored in or introduced into any information storage and retrieval system, in any form or by any means, whether electronic or mechanical, now known or hereinafter invented, without the express written permission of HarperCollins e-books.

They say stress is the silent killer. But poison darts are also pretty damn quiet.

Which, by the way, isn’t my strongest foreign language to begin with. I’m not actually all that great in any foreign language. Although this is much less of a handicap for a secret agent than you might imagine because, in my considerable experience, people in foreign countries always just speak English, just with a heavy accent of whatever country they’re supposed to be from. So international travel is pretty much like watching Hogan’s Heroes.