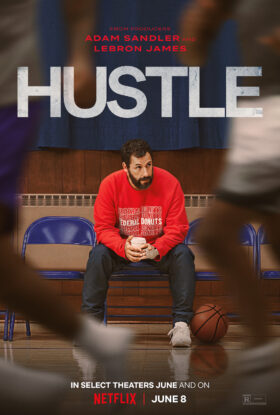 Synopsis: A basketball scout discovers a phenomenal street ball player while in Spain and sees the prospect as his opportunity to get back into the NBA.

Stanley Sugerman: Do you love this game? I mean, love it with your whole heart. Because if you don’t, let’s not even bother. Let’s not open that door. They’re just going to slam it in our face. I love this game. I live this game. There’s a thousand other guys waiting in the wings who are obsessed with this game. Obsession is going to beat talent every time. You got all the talent in the world, but are you obsessed? Let’s face it. It’s you against you out there. When you walk on that court, you have to think, “I am the best guy out there.” So let me ask you again. Do you love this game?

Teresa Sugerman: So you’re just going to give up on your dream?
Stanley Sugerman: Guys in their 50s don’t have dreams. They have nightmares and eczema. There was only one guy who knew what I was capable of, and he died.

Stanley Sugerman: I’ll say one last inspirational thing to you: they can’t kill you if you’re already dead.

Stanley Sugerman: Obsession is going to beat talent every time.

Stanley Sugerman: How can such a beautiful woman have such horrifying feet? What is this yellow thing?
Teresa Sugerman: It’s a callus from exercise. Remember exercise?

Stanley Sugerman: Philadelphia, baby. You’re going to love it. Best sports fans in the world. Actually the worst, but that’s what makes them the best.

Good clothes open many doors. Go Shopping.
Whoever wants to reach a distant goal must take small steps.
A difference, to be a difference, must make a difference.
More Fortunes >