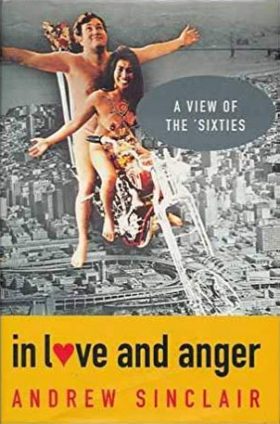 In Love and Anger

Tagline: A View of the ‘Sixties

Synopsis: Cultural history and personal stories of a time of turmoil. From the Suez crisis of 1956 and the urban unrest of the late 1960’s. Sinclair goes from being an Angry Young Man to a married man to a wanted man.

Declassified by Agent Palmer: In Love and Anger by Andrew Sinclair is A Memoir of and for the Sixties

Men do not become what by nature they are meant to be, but what society makes them. The generous feelings, and high propensities of the soul are, as it were, shrunk up, seared, violently wrenched, and amputated, to fit us for our intercourse with the world, something in the manner that beggars maim and mutilate their children, to make them fit for their future situation in life.
-William Hazlitt, Essays

‘Well, if you’ve made your mind up,’ Gallagher said, ‘there’s nothing I can say. But I warn you, the last sacrificial lambs all got killed in Spain. Only the English poets weren’t punched. Heroes are out of date.’

I even went to lengths of writing an essay on the Twentieth-Century Hero. My theses were that nowadays a man’s responsibility to others often made him a man without virtues to himself, and that this century of organization imposed a series of masks and roles on a man, who could only exist behind them as a mere draught.

We were the heirs of an established past which allowed us to become the predators of the present.

‘We are full of dreams, but they are dreams of a vanished past, because nostalgia is the opium of the people.’

‘the test of a first rate intelligence is the ability to hold two opposed ideas in the mind at the same time, and still retain the ability to function. One should, for example, be able to see that things are hopeless and yet be determined to make them otherwise. This philosophy fitted on to my early adult life, when I saw the improbable, the implausible, often the ‘impossible’, come true. Life was something you dominated if you were any good. Life yielded easily to intelligence and effort, or to what proportion could be mustered of both. It seemed a romantic business to be a successful literary man–
F. Scott Fitzgerald, The Crack-Up

…I have naturally believed that secret societies are the boltholes of timid minds.

When the tide goes with you,
Ride the tide.
When it goes against you,
You must still ride.

I did know the elementary rule that whatever silence is, absence is not golden.

My friends were all Proustians and believed in saving their masterpieces in cork-lined rooms until the age of wisdom allowed their appearance in print. I believed in plunging ahead with flashes-in-the-pen that expressed at least the exuberance of the time without the blotter of hindsight.

You must choose, between the things not worth mentioning and those even less so. For if you set out to mention everything you would never be done, and that’s what counts, to be done and to have done.
-Samuel Beckett

One of the best presidents that America had, Stevenson would rather have wit than the White House.

This was my lesson in the power of democracy. Its heroes and presidents, Truman and Kennedy, could still hear the cries of the people and knew the political machines well enough to make reform work. It was direct and effective, and when it grew corrupt, it could be mended. The vote was what mattered, and demographic and economic changes meant that no party boss could manage his ward for ever.

The professors and their assistants at Columbia University, the New York publishers and museum curators, the artists and the actors, appeared to be able to temper an intense Americanism with a certain worldliness and regret from central Europe, as though their tongues were full of old honey scraped from the bottom of a new jar with a switchblade.

We hardly ever know the effect of what we do. If we did, we might be circumspect.

It is wonderful how we chance our arm when we are too young to reckon the consequences.

As Buenos Aires imposed on Jorge Luis Borges ‘the terrible obligation of hope’, so President John F. Kennedy had imposed hope upon us. And that hope, as Borges also stated, was ‘the memory of the future’.

‘a principal social function of science is to act as scapegoat for the blunders and malfunctions of its political masters.’

‘I died many years ago,’ he used to say to us. ‘My subsequent activity has been to maintain this status quo.’

It was a limited hope, but there was hope, to be shattered by three bullets fired in Dallas in conspiracy or madness.

‘Nothing you do outside is important unless you’re centred within.’

The colourful clothes and long hair of the ‘sixties were emblems of tolerance and novelty, experimentation and delight.

…Blow-Up, which would turn out to be the definitive statement of how young life in London appeared to be right then.

For he thought that the pursuit of freedom mattered, not its conquest. Once it was achieved, all discipline was discarded, and decadence resulted without any visible future.

I used to say that every woman needed two men to give her enough time and conversation, while every author needed half a woman to give time enough time to write alone.

But in the beginning was the Word, and without the right words in the script, the stars would not come down from their Bel Air mansions and play. So the writers were pampered and overpaid, abused and ignored once all the relevant phrases had been squeezed from their fingernails by the torture of the Hollywood writing process, treatment after treatment and draft after draft, the mutilation of the original plot by a thousand cuts until only a twitching corpse was left with the right reflex actions for the great names of the business.

We took Stokeley Carmichael’s advice to “organize where you’re at” — we left an essentially liberal-reformist concern with minority group problems and took an introspective look at the deficiencies of our own lives. A genuine radical consciousness came with the realisation that this society oppresses people in many different ways in different situations, and that what is needed is not piecemeal material improvements for one segment of the population, but a revolutionary transformation of all parts of the social structure.

He knew how lethal she was, an immemorial being trapped within the body of a young woman, a fatal attraction.

We sailed into New York on the Queen Elizabeth under the vast steel skeletal wings of the new Verrazano Narrows Bridge: ‘ravished meridians left behind’, my diary read.

Two methods were being advocated of unseating governments — by outrage and fun or by sabotage and gun.

What we had gained, we now might wish to keep. I already knew, or thought I knew, that it was the fate of all revolutions as well as generations to conserve the fruits of the revolution and to become the keepers of the old faith, not the torchbearers of the new…

Buenos Aires, Rome are burning.
Saigon’s burning, Tokyo burns.
Call the engines, call the troops in,
Call the truncheons, it’s your turn.
Old men use fear to kill the new.
It is their love to murder you.
Ho, ho, Mao.
Andrew Sinclair, 1969

It was also the sin and the virtue of the liberal ‘sixties, a blanket permission to do whatever you wanted. No limits were left, the markers were moved beyond the horizon towards Shangri-la.

These were the themes of the ‘sixties for me, love and self-love set against force and anger. Our lives may only be a wrinkled and black mirror to our times, in which we see our reflections occasionally as we pass by; yet willy-nilly, we must catch and give a glimpse of our ephemeral history.

In his history of the new Left, An Infantile Disorder?, Nigel Young found that the last two years of the ‘sixties were, for youth culture, a period of songs such as the softcore ‘Revolution’ of the Beatles and the hard ‘Street Fighting Man’ of the Stones. Physical action was a more expressive experience than political strategy.

Those who live by conspiracy, alas, can only see the lives of others as conspiracies.

Youth had become a form of protest in an era where deviance was smart. Protest was ‘the most pressing of fashions’.

I should have known that there is never a last time in the affairs of women and men. All ultimatums are merely postponed to the next instalment.

What to do with those who want to perpetuate and exaggerate the divisions of race, who wish to falsify history in order to prove that racism always wa and will be paramount, who interpret their every paranoia as a just view, who think that each demand is a fair recompense for the past suffering of their people?

The worst thing, and this George Orwell had noted in 1984, was having to exist in a permanent state of war, fomented by incessant propaganda.

‘Purposeless play is creative. The most inventive scientists and researchers play. Many new inventions started out as play. Artists play.’ The reason why was that play was an affirmation of life. It was not an attempt to bring order out of chaos or to try and improve things, merely a way of awakening to life as it was, and letting it be.

The solidarity and harmony of the underground were breaking up like the fragments of a grenade.

As they say here, you had better be a radical when you’re young to escape from being too reactionary when you’re old, for age you will.

Time is not a great healer, but the faith of small children is.

Long ago, the melting-pot of the immigrants had appeared the solution for the conflicts in American life. The suburb was the compromise between city and country, the naturalized American and intermarriage was the solution between native and immigrant, mass education was the meeting-point between a barbaric and elite culture. Yet when one side picks up arms, so will the other, when one side commits atrocities, so will the other.

I have tried to express this thinking by interweaving social history with my life in these years. Occasionally, and often unwillingly, we do find ourselves briefly a part of what has gone by.

What happened to each one of us individually may have affected some or many of us. In the little may lie the large.

Your moods signal a period of change.
Let’s finish this up now, someone is waiting for you on that.
Good clothes open many doors. Go Shopping.
More Fortunes >