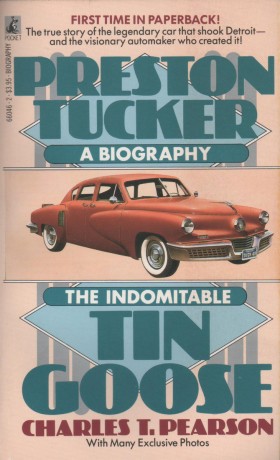 Tagline: A Biography of Preston Tucker

Synopsis: Preston Tucker was a car-crazy kid who hung around auto speedways and great up to create an automobile—the Tucker—that was years ahead of its time. He was a man of pioneering spirit, ingenuity and daring, who revolutionized Detroit in the 1940s with his stunning “care of tomorrow.” It was streamlined, futuristic and fast—the car every American dreamed of owning, at a price most people could afford. A man of endless enthusiasm, Tucker publicized his model all over the country to wild acclaim. He sold stock, set up a factory…and then the auto industry launched a devastating anti-Tucker campaign.

Tucker was plagued by powerful enemies, stalled by production problems and hounded by the SEC. And it seemed his dream—like Howard Hughes’ airplane, the Spruce Goose—might never get off the ground. Yet in the dizzying world of high finance, strangling regulations and political power plays, Tucker held fast to his unique American vision. At last, fifty Tuckers rolled off his assembly line, prized by collectors and copied by competitors—bold, dynamic designs that live on in the cars America drives today.

Declassified by Agent Palmer: A Book Review of Preston Tucker A Biography: The Indomitable Tin Goose by Charles T. Pearson

Building an automobile that came as close as was humanly possible to his ideal was perhaps the one moral obligation Tucker recognized.

He had the knack of making friends because he accepted people at their face value and instilled confidence in others.

“You’ll get the motoring thrill of your life.”

“You’ll find nothing you’ve experienced before will compare with the smooth surge of FLOWING POWER from the Tucker rear engine drive … the new comfort of riding on the unique Tucker individual wheel suspension … the feeling of security you have in driving a car so precisely balanced that it almost drives itself.”

Broadway sho biz grosses may be caught in a downbeat, but the public evidently still has money to spend for an attraction if it’s something it wants to see. That fact was pointed up sharply this week by the first public demonstration of the new Tucker automobile, which will gross an estimated$42,000 for the first seven days ending tomorrow. And, in all probability, will be held over an extra couple of days.

“With Tucker it was different — he had less than a year to develop and get ready for production an entirely new automobile, and only a limited amount of money with which to do it. The veterans with Tucker simply couldn’t adjust. It was beyond them. It was completely outside their experience, and most of them were too old to change.”

Yet that report was the beginning of a myth which persisted and grew after the trial was over. Like the report, the myth is a fantastic and unbelievable mixture of accusations, exaggerations, half truths and lies, magnifying Tucker’s mistakes and ignoring his very real accomplishments.

It will sound like a pronouncement from the National Association of Manufacturers or the Union League, but it nevertheless is fact that courage and venture capital–just plain gamblers’ guts–created every major asset this country has today, from oil and minerals to invention and industry. Not gambling for the petty returns from poker, slot machines and race tracks, but gambling for stakes that can affect the nation, or even the world.

Risk is the price of progress, and when risk is removed as an element of the American Economy, progress will eventually be limited to the work of captive scientists, in the narrow channels fixed by men whose chief concern is nation power and prestige.

But if the nation still believes in private enterprise, even if only in theory, the government’s actions must be deemed a mistake, which if continued may well prove tragic.

To let another into your heart, first let yourself in.
The path of life shall lead upwards for you.
Fame and fortune are coming your way.
More Fortunes >