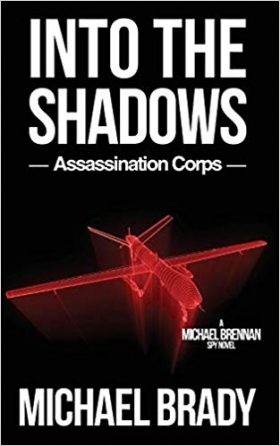 Into the Shadows: Assassination Corps

Synopsis: Michael Brennan is back and joined by John Dearlove, a career British MI6 operative. China has fired a new missile toward an American spy satellite in high earth orbit. A few days later, North Korea fires an intercontinental ballistic missile nearly four hundred kilometers off the coast of Hawaii. The President wants answers and orders the CIA to investigate. After a joint operation is approved between London and Washington, DC, Michael Brennan and John Dearlove arrive in China. What they soon uncover is a deadly organization once thought to have perished in 1912. The Assassination Corps has plans to cripple China’s Communist party, including a daring attack on North Korea’s reclusive leader. Will Michael and John survive their deadly encounter with the mysterious organization?

“His jumps typically meant one thing: he would soon be on his own operating in foreign lands with few friends and trusted allies.”

“A career core collector is always looking to develop assets when possible.”

“Michael sat back on the plush leather couch. Short notice operations were often characterized as dangerous with poorly developed intelligence.”

“Finally, John squeezed a third time and Tommy was dead. Dearlove sat back in his chair and remained emotionless. He never really liked killing but it was a necessary part of the bloody business of espionage. There were winners and losers. Tonight, Tommy lost.”

“As usual, intelligence assessments in Langley lagged the real-time intelligence collected on the ground in Afghanistan. Michael grew accustomed to these kinds of intelligence gaps in previous assignments and accepted them as part of the intelligence business.”

“You know how Washington and London feel about joint operations, Michael. It makes the politicians feel better.”

“Brian learned that boredom often consumed a spies’ time and became their best friend. It was simply the nature of the business.”

“…I know it hurts when our assets turn on us. It’s the nature of the business.”
“True, But the real nature of our business changes us, Michael. We eventually become what we go after.”
Michael Brennan could not have agreed more.

“I’m a core collector, Echo. I collect information and sometimes I am required to kill people. I am not a politician and not looking to become one. I leave political matters for others.”

“Chinese technology, much of it stolen from the United States, was saving his life. How ironic Michael thought to himself.

Courtesy is the password to safety.
You are interested in higher education, whether material or spiritual.
To let another into your heart, first let yourself in.
More Fortunes >