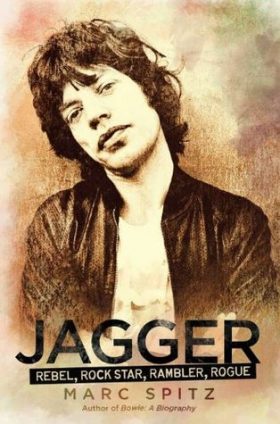 Synopsis: Drawing on firsthand recollections from rockers, filmmakers, writers, and other artists who have been transformed by Mick Jagger’s work, acclaimed music journalist Marc Spitz has created a unique examination of the Jagger legacy.

Mick doesn’t require, like so many of the journalists who’ve written about him (myself included) context to appreciate or enjoy his own life. His skin is a resilient and dense as Keith’s liver tissue.

“He always made sure we were as violent and nasty as possible,” Mick has said. Oldham had even looked into optioning the Anthony Burgess novel A Clockwork Orange as the band’s own noir version of A Hard Day’s Night and Help (but ultimately failed to secure the rights).

“We realizes right from the beginning that we were making our appeal to young people,” he told N.M.E. at the time, “and by making a concentrated effort towards freedom on their behalf we would upset those we neglected. We chose the young instead of the old, that’s all. The Stones are still the social outcasts, the rebels. We worked on the principle that if you are going to kick conformity in the teeth, you may as well use both feet.” -Oldham

“Paint It, Black,” “19th Nervous Breakdown,” “Mother’s Little Helper,” and “Ruby Tuesday” were perfectly constructed sonic art pieces with smart lyrics that frankly observed darkness and nudged hypocrisy, sadness, and decay with precocious humor and existential depth that heretofore seemed impossible for a three-minute pop song. The Stones did so without compromising a shred of toughness.

When the prosecutor asked Richards, “Would you agree in the ordinary course of events, you would expect a young woman to be embarrassed if she had nothing on but a rug in the presence of eight men, two of who were hangers-on and the third a Moroccan servant?” Richards replied, “Not at all,” adding, when pushed, “We are not old men. We are not worried about petty morals.”

“No man dies for what he knows to be true,” Oscar Wilde said. “Men die for what they want to be true, for what some terror in their hearts tells them is not true.” “Jumpin Jack Flash” is about staring down that terror, seeing it for what it is, and moving on. That’s its power (that and the riff).

It was a sinking feeling. There was no way, beyond continuing to write and record music, that he could make a difference. An immediate, direct participation, no matter how expected of him, was ultimately impossible. He’d discovered this in an honest and commendable way, by actually trying and failing to fight.

“All good people deplore problems at a distance,” one reporter laments.

Jagger the rocker was more valuable to the revolution than Jagger the brick thrower. “You always got to have good tunes if you’re marching,” he later said,” but the tunes don’t make the march.”

Pallenberg was like the conch shell in William Golding’s 1954 allegorical novel, Lord of the Flies. If the Stones were the marooned British schoolboys, trying to establish some kind of order in their strange world of drugs, celebrity, and oppression, she provided some kind of system to combat “the Beast” in the forest. To hold her was to have the floor. If you couldn’t keep the floor, then mutiny was inevitable.

Mick did not attend Jones’ funeral, and commented to reporters that he had no intention to “walk the hills” dressed in black, because he didn’t believe that death was the end of existence.

“The Rolling Stones have always in a sense been in danger of imploding,” Cutler writes. “They always sound rocky to begin with and then they struggle through the barriers together and end up making amazing music. They are the most human of bands, one can sense them holding it together–just. It’s something I’ve always loved them for, their ‘vulnerability’ as a band and their musical courage when you can sense them struggling and working their butts off to make the music happen.”

When questioned about the odd juxtaposition of being a raunchy rocker as we as a (for a time, anyway) happily married man, Mick gleefully quipped, “Everyone’s life is contradictory, innit?”

It’s frequently not the drugs that cause bands to burn out, to overdose, to break up; it’s all that waiting.

“You’re going to wake up one morning and know what side of the bed you’ve been lying on.”

When we listen to the Stones, we always think of the larger “we.” When we listen to Mick (or Keith, for that matter) solo we only think “he.” We are all Rolling Stones. “The Stones have the strength to make you feel that both we and they are hemmed in and torn by similar walls, frustrations, and tragedies,” Lester Bangs wrote. But there is only one Mick. We cannot embody him without Keith and Charlie around.

“…I thought he was a great producer. One of the first things he did was make a mix tape for our singer Corey Glover. Really old rarities. Blues. He made him a mix tape!”

“If we go out on tour, we gotta do a record,” Mick has said. “It shows you are an actual functioning rock band. I don’t want to be one of those bands that does hits. People say, ‘I much prefer to hear “Brown Sugar” than some new song.’ Well, I don’t give a shit what you prefer.”

Mick, a “lovely bunch of guys,” as he’s been referred to by Keith…

Mick is and will likely remain our most consistently misunderstood rock and roller, and I’m not sure if it isn’t so by design. As long as we don’t really get him, he is free to surprise…