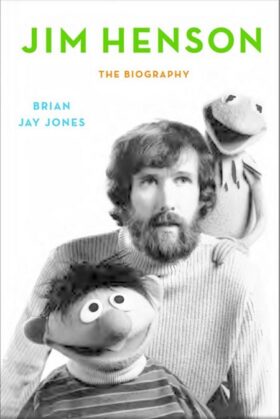 Synopsis: The story for Jim Henson from his origins to his legacy and everything in between.

Declassified by Agent Palmer: Jim Henson: The Biography is a Beacon of Positivity Just Like Jim

…a penchant for maintaining a respectful silence about unhappy circumstances that her grandson Jim Henson would also share.

For his younger son, however, those first years in Maryland were a blur–no surprise, really, considering that Jim’s colleagues would later laugh that his ability to recall the past was almost nonexistent.

When pressed, Jim would name the blackbird as his favorite, not only for its spunky personality, but also because he delighted in the sound of the bird’s less formal name: the grackle. It was the sort of deliciously sharp-sounding nonsensical word that Jim loved–a meaningless word that just sounded like it meant something.

“Over the years, I’ve evolved my own set of beliefs and attitudes–as we all have–I feel work for me,” Jim wrote later.

“A child’s use of imagination and fantasy blends into his use of creativity,” Jim explained later.

As Jim would discover, there was a kind of magic, a wonderful kind of freedom, involved in letting a character at the end of your arm give voice to sentiments one might not feel comfortable expressing while where the guise of, as Jim called them, “ordinary people.”

When done right, it’s possible to be still and subversive at the same time.

…but it was typical Jim: even for a five-minute comedy romp, no matter how absurd, had to mean something.

“Many of the things I’ve done in my life have basically been self-taught,” Jim admitted later. “I had never worked with puppets . . . and even when I began on television, I really didn’t know what I was doing,. I’m sure this was a good thing, because I learned as I tackled each problem. I think if you study–if you learn too much of what others have done–you may tend to take the same direction as everybody else.”

“I believe that we form our own lives, that we create our own reality, and that everything works out for the best,” Jim said later. “I know I drive some people crazy with what seems to be ridiculous optimism, but it has always worked out for me.” Jim’s optimism and enthusiasm for life, even in the face of hardship or sadness would remain one of his most endearing and inspiring qualities.

It was as if those few weeks in Europe had opened a creative floodgate–for what followed would be a period of enormous experimentation and artistic growth as Jim pursued a wide variety of interests and began to play with other forms of media. Many projects would never make it beyond the idea phase, drawn into Jim’s sketchbooks with elaborate notes, while others would result in wonderful bits of animation or recordings that Jim would keep privately to himself, satisfied merely with the act of creating and imagining. He was reaching out, exploring new ways to tell stories and create worlds, the ideas coming almost faster than he could scribble down or carry out.

Jim also created a number of artsy films for the company, such as Paperwork Explosion, a rapid-fire appraisal of IBM’s technology set against a background of electronic music by Raymond Scott, in which Jim cautioned viewers to remember that “Machines should work; people should think.”

If The Cube, or even Youth 68, left critics and audiences baffled, Jim didn’t mind a bit; he was pursuing his own interests, regardless of success–and besides, he still had Muppet commercials and appearances on variety shows to pay the bills.

“The most sophisticated people I know . . . inside, they are all children,” Jim said.

“I live kind of within myself as a person, so my outlet has always been the Muppets; therefore, I tend to do sort of wildly extroverted characters,” said Jim.

It was what the audience wanted and so I felt I should be putting my time and energy into that. The Muppets have always had a life of their own and we who do the Muppets serve that life and the audience. This entity called the Muppets is something that I don’t dictate at all. The audience doesn’t dictate it either–but the response of the audience is all part of it. It has a natural flow of life that one goes with. It’s been fun and rewarding–just wonderful–and I hope that will continue.

“Bein’ Green,” an anthem for tolerance and self-acceptance that seemed tailor-made as a hymn for the new decade, still struggling with the turbulent civil rights reform, political skepticism, and sputtering idealism that had marked the end of the 1960s.

As Jim performed Kermit from the couch, Cavett was captivated. “It’s hard to tell where Kermit leaves off and you begin!” said Cavett.
“Yes, I’ve noticed that,” Jim responded, smiling.

Ultimately, said Jim, “I believe that life is basically a process of growth–that we go through many lives, choosing those situations and problems that we will learn through.”

As a master of promotion, sales, and public relations, Lazar was determined to bring the same polish to Henson Associates that he had brought to the IBM product line–and as far as Lazar was concerned, the product at Henson Associates wasn’t the Muppets, it was Jim.

“He had,” said Juhl, in perhaps the most apt description of Jim, “a whim of steel.”

I don’t resent the long work time–I shouldn’t–I’m the one who set my life up this way–but I love to work. It’s the thing that I get the most satisfaction out of–and probably what I do best. Not that I don’t enjoy days off–I love vacations and loafing around. But I think much of the work has the wrong idea of working–it’s one of the good things in life–the feeling of accomplishment is more real and satisfying than finishing a good meal or looking at one’s accumulated wealth.

“If The Muppet Show had a basketball team, the score would always be Frog 99, Chaos 98.”

Jim tried his best to soothe any bruised feelings–in his view, everyone at Henson Associates, whether they were puppeteers or accountants, was creative and valuable. “We are primarily a company of creative people, whose art we are helping to bring to the world,” he explained–and while art may have been at the heart of the organization, it was money and merchandising that kept the blood pumping. “We recognized that business enables art ‘to happen,’ and that business plays an essential role in communicating art to a broad audience,” he said. “As both artists and businesspersons, we understand the value of both worlds, and so we bring them together in a way that facilitates the realization of our artistic vision.”

“When you try to get people in the industry to accept a big idea, it usually takes a long time–months or years,” said Jim, who had devoted more than a decade to the task of bringing the Muppets to television and film. “And when they finally say, ‘yes–let’s go with it,’ part of my creative mind is already somewhere else, doing something quite different. I think that’s the normal pattern. By the time I’m actually producing something, part of me is wanting to do something else. I don’t particularly want to make my life go crazy doing several things at the same time, but it always seems to happen that way.”

From the very beginning, Jim was intrigued with the idea of having three very different kinds of Muppet “species” linked together in some way that set up an unintentional but very necessary balance between them.

“Fraggle Rock was a true depiction of Jim’s feelings of peace and harmony,” said Lazer…

“I think the idea for The Dark Crystal came along at about the time we were ready to handle it–which is basically the way things have happened all my life.”

“Dark Crystal was a $25 million R&D project for Fraggle Rock,” said Michael Frith, “because all that stuff that we invented for Dark Crystal I rolled right into Fraggle Rock.”

“…The most important thing, however, is to love what you’re doing and to go after those visions, no matter where they lead.”

“I feel I’ve always done well at using the technical aspects of the medium to expand what we can do,” said Jim. “I find that combination of art and technology pretty exciting.”

Brian Henson admired his father’s “mind-set”–a work ethic that valued both creativity and collaboration. “That’s probably what he taught me more than anything,” Brian said. “I learned from him to be very, very prepared and then very, very flexible–to know exactly what you’re going to do, until somebody has another idea . . . because that’s the way to work, you know.”

Always, then, the work had to matter–because to Jim, the world mattered. “I know that it’s easier to portray a world that’s filled with cynicism and anger, where problems are solved with violence,” Jim once said. “What’s a whole lot tougher is to offer alternatives, to present other ways conflicts can be resolved, and to show that you can have a positive impact on your world. To do that, you have to put yourself out on a limb, take chances, and run the risk of being called a do-gooder.”

Your moods signal a period of change.
Sharing little joys offer great hope to others.
Look forward to great fortune and a new lease on life!
More Fortunes >