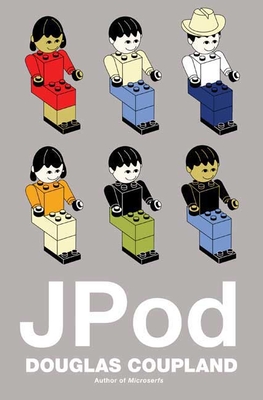 Synopsis: Ethan Jarlewski and five co-workers whose surnames begin with “J” are bureaucratically marooned in jPod, a no-escape architectural limbo on the fringes of a massive Vancouver game design company. The jPodders wage daily battle against the demands of a boneheaded marketing staff, who daily torture employees with idiotic changes to already idiotic games. Meanwhile, Ethan’s personal life is shaped (or twisted) by phenomena as disparate as Hollywood, marijuana grow-ops, people-smuggling, ballroom dancing, and the rise of China. JPod’s universe is amoral, shameless, and dizzyingly fast-paced like our own.

Nobody will ever check your credentials unless you run for public office or become head of a school; the secret message is “don’t aim for the top–aim for someplace two notches below the top.”

People say that everyone can be a success, but you look at the numbers and no, the world is way more about failure and compromised standards than it is about winning.

Does he consider himself normal?: I used to, but now I wonder. Or rather, I think I’m still normal, but everyone around me is going random. Now I look at most people like recently lit Roman candles, unsure if they’re about to go off, or if they’re merely duds.

“If I were Douglas Coupland, I’d have sued the pants off Aaron Spelling.”

If you can control your emotions, chances are you don’t have too many.

On the way home yesterday I stopped at a Ricky’s Pancake Hut for a cheeseburger, fries and Coke. It’s not what I usually order, but for a short while I wanted to pretend I was living inside and Archie comic–don’t we all feel like that at some time or another?

“Drinking Zima is something Douglas Coupland would make a character do.”

Bree, in her new plan to crack upper management, has decided to can the French stuff and start speaking with a British accent. “It’s a proven fact that women with British accents climb corporate ladders much more quickly in North America than those of us who speak with a shopping mall accent.”

About half of the smokers were on their cellphones. Kaitlin came out, ready to go home. She said, “Remember how, back in 1990, if you used a cellphone in public you looked like a total asshole? We’re all assholes now.”

I think people in the year 2020 are going to be nostalgic for the sensation of feeling clueless.

…it was Douglas Coupland in 3K.

What an asshole. (Ethan about Coupland)

Feeling unique isn’t the same as being unique.

It doesn’t matter how good games get, heaven will always be an arcade full of arcade games to me.

Why do companies like Toblerone or Pepperidge Farm bother having websites? As if people are going to say to themselves, “Gee, I wish I knew more about Milano cookies. I know! I’ll go to their site!”
Just a thought.

Life is dull, but it could be worse and it could be better. We accept that a corporation determines our life’s routines. It’s the trade-off so that we don’t have to be chronically unemployed creative types, and we know it. When we were younger, we’d at least make a show of not being fooled and leave copies of Adbusters on our desktops. After a few years it just doesn’t matter. You trawl for jokes or amusingly diversionary .wav files. You download music. A new project comes along, then endures a slow-motion smothering at the hands of meetings. All ideas feel stillborn. The air smells like five hundred sheets of paper.

And then it’s another day.

You are interested in higher education, whether material or spiritual.
Things are turning for the bright side.
The path of life shall lead upwards for you.
More Fortunes >