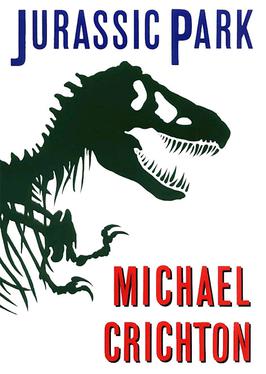 Synopsis: An astonishing technique for recovering and cloning dinosaur DNA has been discovered. Now humankind’s most thrilling fantasies have come true. Creatures extinct for eons roam Jurassic Park with their awesome presence and profound mystery, and all the world can visit them—for a price.

“You cannot recall a new form of life.”
Erwin Chargaff, 1972

The late twentieth century has witnessed a scientific gold rush of astonishing proportions: the headlong na furious haste to commercialize genetic engineering. This enterprise has proceeded so rapidly–with so little outside commentary–that its dimensions and implications are hardly understood at all.

“At the earliest drawings of the fractal curve, few clues to the underlying mathematical structure will be seen.” – Ian Malcolm

But Grant knew that paleontology, the study of extinct life, had in recent years taken on an unexpected relevance to the modern world. The modern world was changing fast, and urgent questions about the weather, deforestation, global warming, or the ozone layer often seemed answerable, at least in part, with information from the past. Information that paleontologists could provide. He had been called as an expert witness twice in the past few years.

Grant knew that people could not imagine geological time. Human life was lived on another scale of time entirely. An apple turned brown in a few minutes. Silverware turned black in a few days. A compost heap decayed in a season. A child grew up in a decade. None of these everyday human experiences prepared people to be able to imagine the meaning of eighty million years–the length of time that had passed since this little animal had died.

Norman Atherton, the Stanford geneticist who was Hammond’s partner in the new venture.

“…The concept of the most advanced amusement park in the world, combining the latest electronic and biological technologies. I’m not talking about rides. Everybody has rides. Coney Island has rides. And these days everybody has animatronic environments. The haunted house, the pirate den, the wild west, the earthquake–everyone has those things. So we set out to make biological attractions. Living attractions. Attractions so astonishing they would capture the imagination of the entire world.”

Ian Malcolm was one of the most famous of the new generation of mathematicians who were openly interested in “how the real world works.” These scholars broke with the cloistered tradition of mathematics in several important ways. For one thing, they used computers constantly, a practice traditional mathematicians frowned on. For another, they worked almost exclusively with nonlinear equations, in the emerging field called chaos theory. For a third, they appeared to care that their mathematics described something that actually existed in the world. And finally, as if to emphasize their emergence from academia into the world, they dressed and spoke with what one senior mathematician called “a deplorable excess of personality.” In fact, they often behaved like rock stars.

“We live in a world of frightful givens. It is given that you will behave like this, given that you will care about that. No one thinks about the givens. Isn’t it amazing? In the information society, nobody thinks. We expected to banish paper, but we actually banished thought.”

“Story of our species,” Malcolm said, laughing. “Everybody knows it’s coming, but not so soon.”

People who imagined that life on earth consisted of animals moving against a green background seriously misunderstood what they were seeing.

“Because, let’s face facts,” Hammond said. “Universities are no longer the intellectual centers of the country. The very idea is preposterous. Universities are the backwater. Don’t look so surprised. I’m not saying anything you don’t know. Since World War II, all the really important discoveries have come out of private laboratories. The laser, the transistor, the polio vaccine, the microchip, the hologram, the personal computer, magnetic resonance imaging, CAT scans–the list goes on and on. Universities simply aren’t where it’s happening any more. And they haven’t been for forty years. If you want to do something important in computers or genetics, you don’t go to a university. Dear me, no.”

“Broadly speaking, the ability of the park to control the spread of life forms. Because the history of evolution is that life escapes all barriers. Life breaks free. Life expands into new territories. Painfully, perhaps even dangerously. But life finds a way.” Malcolm shook his head. “I don’t mean to be philosophical, but there it is.”

“But we have soothed ourselves into imagining sudden change as something that happens outside the normal order of things. An accident, like a car crash. Or beyond our control, like a fatal illness. We do not conceive of sudden, radical, irrational change as built into the very fabric of existence. Yet it is. And chaos theory teaches us,” Malcolm said, “that straight linearity, which we have come to take for granted in everything from physics to fiction, simply does not exist. Linearity is an artificial way of viewing the world. Real life isn’t a series of interconnected events occurring one after another like beads strung on a necklace. Life is actually a series of encounters in which one event may change those that follow in a wholly unpredictable, even devastating way.” Malcolm sat back in his seat, looking toward the other Land Cruiser, a few yards ahead. “That’s a deep truth about the structure of the universe. But, for some reason, we insist on behaving as if it were not true.”

Blurred through the rainy windshield, the dinosaur was coming toward their car. Slow, ominous strides, coming right toward them.
Malcolm said, “You know, at times like this one feels, well, perhaps extinct animals should be left extinct. Don’t you have that feeling now?”

“I’ll tell you the problem with engineers and scientists. Scientists have an elaborate line of bullshit about how they are seeking to know the truth about nature. Which is true, but that’s not what drives them. Nobody is driven by abstractions like ‘seeking truth.’

“Scientists are actually preoccupied with accomplishment. So they are focused on whether they can do something. They never stop to ask if they should do something. They conveniently define such considerations as pointless. If they don’t do it, someone else will. Discovery, they believe, is inevitable. So they just try to do it first. That’s the game in science. Even pure scientific discovery is an aggressive, penetrative act. It takes big equipment, and it literally changes the world afterward. Particle accelerators scar the land, and leave radioactive byproducts. Astronauts leave trash on the moon. There is always some proof that scientists were there, making their discoveries. Discovery is always a rape of the natural world. Always.
“The scientists want it that way. They have to stick their instruments in. They have to leave their mark. They can’t just watch. They can’t just appreciate. They can’t just fit into the natural order. They have to make something unnatural happen. That is the scientist’s job, and now we have whole societies that try to be scientific.”

“You know what’s wrong with scientific power?” Malcolm said. :It’s a form of inherited wealth. And you know what assholes congenitally rich people are. It never fails.”
Hammond said, “What is he talking about?”

Harding made a sign, indicating delirium. Malcolm cocked his eye.

“I will tell you what I am talking about,” he said. “Most kinds of power require substantial sacrifice by whoever wants the power. There is an apprenticeship, a discipline lasting many years. Whatever kind of power you want. President of the company. Black belt in karate. Spiritual guru. Whatever it is you seek, you have to put in the time, the practice, the effort. You must give up a lot to get it. It has to be very important to you. And once you have attained it, it is your power. It can’t be given away: it resides in you. It is literally the result of your discipline.

“Now, what is interesting about this process is that, by the time someone has acquired the ability to kill with his bare hands, he has also matured to the point where he won’t use it unwisely. So that kind of power has a built-in control. The discipline of getting the power changes you so that you won’t abuse it.

“But scientific power is like inherited wealth: attained without discipline. You read what others have done, and you take the next step. You can do it very young. You can make progress very fast. There is no discipline lasting many decades. There is no master: old scientists art ignored. There is no humility before nature. There is only a get-rich-quick, make-a-name-for-yourself-fast philosophy. No one will criticize you. No one has any standards. They are all trying to do the same thing: to do something big, and do it fast.

“And because you can stand on the shoulders of giants, you can accomplish something quickly. You don’t even know exactly what you have done, but already you have reported it, patented it, and sold it. And the buyer will have even less discipline than you. The buyer simply purchases the power, like any commodity. The buyer doesn’t even conceive that any discipline might be necessary.”

“You know what we are really talking about here,” Malcolm said. “All this attempt to control . . . We are talking about Western attitudes that are five hundred years old. They began at the time when Florence, Italy, was the most important city in the world. The basic idea of science–that there was a new way to look at reality, that it was objective, that it did not depend on your beliefs or your nationality, that it was rational–that idea was fresh and exciting back then. It offered promise and hope for the future, and it swept away the old medieval system, which was hundreds of years old. The medieval world of feudal politics and religious dogma and hateful superstitions fell before science. But, in truth, this was because the medieval world didn’t really work any more. It didn’t work economically, it didn’t work intellectually, and it didn’t fit the new world that was emerging.”

“But now,” he continued, “science is the belief system that is hundreds of years old. And, like the medieval system before it, science is starting not to fit the world any more. Science has attained so much power that its practical limits begin to be apparent. Largely through science, billions of us live in one small world, densely packed and intercommunicating. But science cannot help us decide what to do with that world, or how to live. Science can make a nuclear reactor, but it cannot tell us not to build it. Science can make pesticide, but cannot tell us not to use it. And our world starts to seem polluted in fundamental ways—air, and water, and land—because of ungovernable science.”

Your powers are much less than your dreams of reason would have you believe.”

Things are turning for the bright side.
Nothing in the world can take the place of persistence.
To let another into your heart, first let yourself in.
More Fortunes >