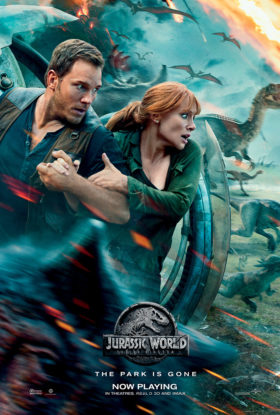 Tagline(s): Life finds a way.
The park is gone.
Off the Island. Into your Home.
The Next Stage of Evolution.

Based On: Based characters created by Michael Crichton

Synopsis: When the island’s dormant volcano begins roaring to life, Owen and Claire mount a campaign to rescue the remaining dinosaurs from this extinction-level event.

Sub Pilot: Relax. Anything in here would be dead by now.

Ian Malcolm: How many times do you have to see the evidence? How many times must the point be made? We’re causing our own extinction. Too many red lines have been crossed. And our home has, in fundamental ways, been polluted by avarice and political megalomania. Genetic power has now been unleashed and of course, that’s going to be catastrophic. This change was inevitable from the moment we brought the first dinosaur back from extinction. We convince ourselves that sudden change is something that happens outside the normal order of things, like a car crash, or that it’s beyond our control, like a fatal illness. We don’t conceive of sudden, radical, irrational change as woven into the very fabric of existence. Yet, I can assure you, it most assuredly is. And it’s happening now. Humans and dinosaurs are now gonna be force to coexist. These creatures were here before us. And if we’re not careful, they’re gonna be here after. We’re gonna have to adjust to new threat that we can’t imagine. We’ve entered a new era. Welcome to Jurassic World.

Owen Grady: Nervous flyer?
Franklin: Would you ride a thousand pound horse with big wheels on the sides?
Owen Grady: I rode a motorcycle through the jungle with a pack of raptors.
Franklin: We’re not compatible.

Eli Mills: The man who proved Raptors can follow orders. You never thought how many millions a trained predator might be worth?

Claire Dearing: Do you remember the first time you saw a dinosaur? First time you see them, it’s like… a miracle. You read about them in books, you see the bones in museums but you don’t really… believe it. They’re like myths. And then you see… the first one alive.

Ian Malcolm: I think that we should allow our, uh, magnificent , glorious dinosaurs to be taken out by the volcano.
Senator Sherwood: Silence please
Ian Malcolm: As deeply sad as that would be, we altered the course of natural history. This is a correction.
Senator Sherwood: Are you suggestion that the Almighty is taking matters into his own hands?
Ian Malcolm: Senator, with all do respect, God’s not part of the equation. No. What I mean is that in the last century, we amassed landmark technological power. And we’ve consistently proven ourselves incapable of handling that power. 80 years ago, who could have predicted nuclear proliferation and then there it was. And now we’ve got genetic power, so how long is it going to take to spread around the globe and what’s going to be done with it? It ain’t going to stop with the de-extinction of the dinosaurs.
Senator Sherwood: I’m not sure I know that you’re talking about.
Ian Malcolm: I’m talking about man-made cataclysmic change.
Senator Sherwood: What kinda of change?
Ian Malcolm: Change is like death. You don’t know what it looks like till you’re standing at the gates.

Owen Grady: I know why we’re here. A rescue op. Save the dinosaurs from an island that’s about to explode. What could go wrong?

To let another into your heart, first let yourself in.
Whoever wants to reach a distant goal must take small steps.
Things are turning for the bright side.
More Fortunes >