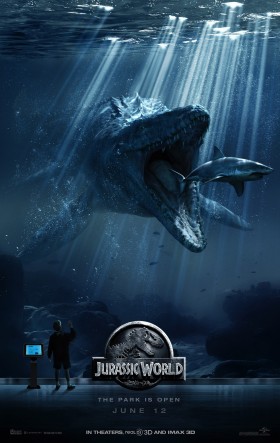 Tagline: The park is open.

Based On: Based on Jurassic Park by Michael Crichton

Synopsis: A new theme park is built on the original site of Jurassic Park. Everything is going well until the park’s newest attraction–a genetically modified giant stealth killing machine–escapes containment and goes on a killing spree.

Claire: Corporate felt genetic modification would up the “wow” factor.
Owen: They’re dinosaurs. “Wow” enough.
Claire: Not according to our focus groups. The Indominus rex makes us relevant again.
Owen: “The Indominus rex!”
Claire: We needed something scary and easy to pronounce. You should hear a four year old try to say ‘Archaeornithomimus’.
Owen: You should hear you try to say it…

Masrani: You created a monster!
Henry Wu: Monster is a relative term. To a canary, a cat is a monster. We’re just used to being the cat.

Claire: So, you can pick up their scent can’t you? Track their the foot prints
Owen: I was with the Navy! Not the Navajo!

Masrani: The key to a happy life is to accept you are never actually in control.

Claire: We have an asset out of containment!

Owen: These animals are thinking: “I gotta eat.” “I gotta hunt.” “I gotta…” You gotta be able to relate to at least one of those things.

Masrani: Remember why this place was made, Claire. Jurassic World exists to show us how very small we are. Very new. You can’t put a price on that.

Gray: Can we stay with you?
Claire: I am never leaving you again!
Gray, Zach: No, no, him. We mean him.

Masrani: So the paddock is quite safe then…
Claire: We have the best structural engineers in the world.
Masrani: Yeah, so did Hammond…

Owen: Watch your six! Raptors got a new alpha!

Claire: And please, clean your workplace. It’s… chaotic.
Lowery: I like to see it as living system… Just enough stability to keep it from falling into total anarchy.

Owen: Don’t worry. It’s gonna be just like taking a walk in the woods… 65 million years ago.

Claire: The park needs a new attraction every few years in order to reinvigorate the public’s interest. Kind of like the space program.

Henry Wu: Nothing in Jurassic World is natural, we have always filled gaps in the genome with the DNA of other animals. And if the genetic code was pure, many of them would look quite different. But you didn’t ask for reality, you asked for more teeth.

Claire: Think this will scare the kids?
Masrani: The kids? This will give the parents nightmares.

Karen: A promise tomorrow is worth a lot less than trying today.

Claire: So now what do we do?
Owen: Probably stay together. For survival.

Lowery: Maybe you should include that in the brochure… eventually one of these things will eat someone.

Claire: We have learned more in the past year from genetics, than a century of digging up bones! A whole new frontier has opened up! We have our first genetically modified hybrid!
Owen: You just went and made a new dinosaur? Probably not a good idea…

Owen: You’re the new guy, right?
Young Raptor Handler: Yeah.
Owen: You ever wonder why there was a job opening? Don’t turn your back to the cage.

Claire: The Indominus rex. Our first genetically modified hybrid.
Jim Drucker: How did you get two different kinds of dinosaurs to, y’know…
Henry Wu: Oh, Indominus wasn’t bred. She was designed. She will be fifty feet long when fully grown. Bigger than the T-rex.

Owen: You made a genetic hybrid. Raised it in captivity. She is seeing all of this for the first time. She does not even know what she is. She will kill everything that moves.
Masrani: You think the animal is contemplating its own existence?
Owen: She is learning where she fits on the food chain and I’m not sure you want her to figure that out.

Claire: Every time we unveiled a new attraction, attendance has spiked.

To let another into your heart, first let yourself in.
Fame and fortune are coming your way.
Even a broken clock is right two times a day.
More Fortunes >