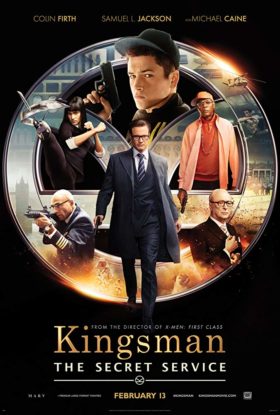 Based On: Based on the comic book “The Secret Service” by Mark Millar and Dave Gibbons

Synopsis: A spy organization recruits an unrefined, but promising street kid into the agency’s ultra-competitive training program, just as a global threat emerges from a twisted tech genius.

Harry Hart: Um, listen, boys. I’ve had a rather emotional day, so whatever your beef with Eggsy is – and I’m sure it’s well founded – I’d appreciate it enormously if you could just leave us in peace, until I can finish this lovely pint of Guinness.

Valentine: When you get a virus, you get a fever. That’s the human body raising its core temperature to kill the virus. Planet Earth works the same way: Global warming is the fever, mankind is the virus. We’re making our planet sick. A cull is our only hope. If we don’t reduce our population ourselves, there’s only one of two ways this can go: The host kills the virus, or the virus kills the host. Either way…

Valentine: We each spend, on average, $2,000 a year on cell phone and Internet usage. It gives me great pleasure to announce, those days are over. As of tomorrow, every man, woman, and child can claim a free SIM card that’s compatible with any cell phone, any computer, and utilize my communications network for free. Free Calls. Free Internet. For Everyone. Forever.

Harry Hart: A little gratitude would be nice. My name is Harry Hart, and I gave you that medal. Your father saved my life.

Valentine: Great, you don’t know, the CIA don’t know. Nobody knows who this guy is? Fine. Seriously, it’s fine. Well, it’s not really fine, but it’s not why I’m here. Hell, man, you know me. Money’s not my issue. I could’ve retired straight out of M.I.T., fucked off to some island and let the business run itself. Nobody told me to try and save the planet. I wanted to. Climate change research, lobbying, years of studying, billions of dollars, and you know why I quit? Because the last time I checked, the planet was still fucked. Hence, my epiphany. Money won’t solve this. Those idiots that call themselves politicians have buried their heads in the sand and stood for nothing but re-election. So I spent the last two years trying to find a real solution. And I found it. Now, if you really wanna make the world a better place, I suggest you open your fucking ears, because I’m about to tell it to you.

Gary ‘Eggsy’ Unwin: Mycroft, you’ve just been promoted from my pilot to my valet.

Valentine: Hey all! Everybody listen up! What the fuck is wrong with you people? I just want to remind you all that today is a day of celebration. We must put aside all thoughts of death, and focus on birth. The birth of a new age. We mustn’t mourn the ones who give their lives today. We should honor their sacrifice, and their role in saving the human race. We must put aside doubts and guilt. You are the chosen people. When folks tell their kids the story about Noah’s Ark, is Noah the bad guy?

Harry Hart: The point is, Eggsy, nobody thanked me for any of them. Front page news and all these occasions are celebrity nonsense. Because it’s the nature of Kingsman that our achievements remain secret. A gentleman’s name should appear in the newspaper only three times: When he’s born, when he marries, and when he dies. And we are, first and foremost, gentlemen.

Valentine: Beijing. So freaky how there’s no recognizable name for the Chinese Secret Service. Now that’s what you call a secret, right? You know what? Fuck it. We need to speed things up. Bring the product release forward.

Valentine: Do you like spy movies, Mr. DeVere?
Harry Hart: Nowadays, they’re all a little serious for my taste. But the old ones… marvelous. Give me a far-fetched theatrical plot any day.
Valentine: The old Bond movies. Oh, man. Ah, when I was a kid, that was my dream job: gentleman spy.
Harry Hart: I always felt that the old Bond films were only as good as the villain. As a child, I rather fancied a future as a colorful megalomaniac.
Valentine: What a shame we both had to grow up.

Sharing little joys offer great hope to others.
Whoever wants to reach a distant goal must take small steps.
Nothing in the world can take the place of persistence.
More Fortunes >