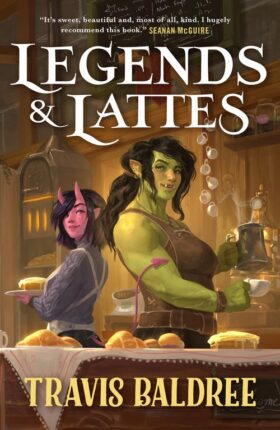 Tagline: A Novel of High Fantasy and Low Stakes

Synopsis: Worn out after decades of packing steel and raising hell, Viv the orc barbarian cashes out of the warrior’s life with one final score. A forgotten legend, a fabled artifact, and an unreasonable amount of hope lead her to the streets of Thune, where she plans to open the first coffee shop the city has ever seen.

Declassified by Agent Palmer: Pour One Out for the Excellent Legends & Lattes by Travis Baldree

In the dimming light she surveyed the interior, amidst horse apples of antiquity and the dust of neglect. She didn’t know much about buildings, but it was clear that this one needed an unbelievable amount of work.
But at the end of it? Something she built up, than cut down. Rather
It was ridiculous, of course. A coffee shop? In a city where nobody even knew what coffee was? Until six months ago, she’d never heard of it, never smelled or tasted it. On the face of it, the whole endeavor was ludicrous.
She smiled in the dark.

“I told you I came across it in Azimuth, and I remember following the smell to the shop. They called it a café. People just sat around drinking it from these little ceramic cups, and I had to try it, and… it was like drinking the feeling of being peaceful. Being peaceful in your mind. Well, not if you have too much, then it’s something else.”
“A lot of folks allow you feel peaceful after a beer.”
“It’s different. I don’t know if I can tell you how it is.”

…thinking about how clear the division between success and failure had once been. That clarity had never been more elusive.

Even the greatest of whales is helpless in the middle of a desert.
Look forward to great fortune and a new lease on life!
Fame and fortune are coming your way.
More Fortunes >