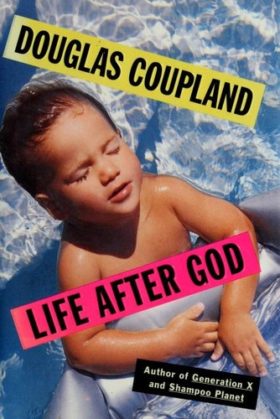 Synopsis: We are the first generation raised without God. We are creatures with strong religious impulses, yet they have nowhere to flow in this world of malls and TV, Kraft dinners and jets. How do we cope with loneliness? Anxiety? The collapse of relationships?

How do we reach the quiet, safe layer of our lives? In this compellingly innovative collection of stories, bestselling author Douglas Coupland responds to these themes. Cutting through the hype of modern living to find a rare grace amid our lives, he uncovers a new kind of truth for a culture stuck on fast-forward. A culture seemingly beyond God.

Declassified by Agent Palmer: 10 Quotes from Life After God by Douglas Coupland that are Reasons for you to Pick it Up

…five thousand years ago people emerge out of nowhere–sprong!–with brains and everything and begin wrecking the planet. You’d think we’d give the issue more thought than we do.

Some day you cross this thin line and you really realize that we need to protect ourselves from ourselves.

So what is it about our essential humanity that we are expressing with our inventions? What is it that makes us us?

Time, Baby–so much, so much time left until the end of my life–sometimes I go crazy at how slowly time passes yet how quickly my body ages.

Sometimes it is nice to sit with people and not say much of anything.

I said that the secret world reminded me of the world of sleep where time and gravity and things like that don’t matter.

Now: I believe that you’ve had most of your important memories by the time you’re thirty.

And then sometimes I think the people to feel saddest for are people who once knew what profoundness was, but who lost or became numb to the sensation of wonder.

I think it takes an amazing amount of energy to convince oneself that the Forever Person isn’t just around the next corner.

Time ticks by; we grow older. Before we know it, too much time has passed and we’ve missed the chance to have had other people hurt us. To a younger me this sounded like luck; to an older me this sounds like a quiet tragedy.

I would like to fall in love again but my only hope is that love doesn’t happen to me so often after this. I don’t want to get so used to falling in love that I get curious to experience something more extreme–whatever that may be.

…in spite of everything that has happened in my life, I have never lost the sensation of always being on the brink of some magic revelation–that if only I would look closely enough at the world, then that magic revelation would be mine–if only I could wake up just that little bit more…

But connections have been made in my mind, however–connections which are hard for me to sever even now, twenty years later: one, that McDonald’s equals evil; two, that technology does not always equal progress.

The 1970s and disaster movies: seeing The Poseidon Adventure for the first time–the first movie I venture downtown, to see on my own at the Orpheum Theater to watch a world tip upside down. Earthquake; The Omega Man; The Andromeda Strain; Soylent Green; Towering Inferno; Silent Running, films nobody makes anymore because they are all projecting so vividly inside our heads–to be among the last people inhabiting worlds that have vanished, ignited, collapsed and been depopulated.

When you are young, you always expect that the world is going to end. And then you get older and the world still chugs along and you are forced to re-evaluate your stance on the apocalypse as well as your own relationship to time and death. You realize that the world will indeed continue, with or without you, and the pictures you see in your head. So you try to understand the pictures instead.

…of hoping that the childishness of our ways would cancel out the adultness of having gotten married.

You are the first generation raised without religion.

…but loneliness had of late become an emotion I had stopped feeling so intensely. I had learned loneliness’s extremes and had mapped its boundaries; loneliness was no longer something new or frightening–just another aspect of life that, once identified, seemed to disappear.

My drive continued and worries about vanishing feelings remained like a background radiation. But I guess the nice thing about driving a car is that the physical act of driving itself occupies a good chunk of brain cells that otherwise would be giving you trouble overloading your thinking. New scenery continually erases what came before; memory is lost, shuffled, relabeled and forgotten. Gum is chewed; buttons are pushed; windows are lowered and opened. A fast moving car is the only place where you’re legally allowed to not deal with your problems. It’s enforced meditation and this is good.

This is not an easy thing to do. Precisely articulating one’s beliefs is difficult.

Sometimes you can’t realize you’re in a bad mood until another person enters your orbit.

I felt naive and middle-class for having hoped–even briefly–that I could bond with the unbondable, for thinking that all it takes to make crazy people uncrazy is a little bit of hearty attention and good sense.

And then I felt sad because I realized that once people are broken in certain ways, they can’t ever be fixed, and this is something nobody ever tells you when you are young and it never fails to surprise you as you grow older as you see the people in your life break one by one. You wonder when your turn is going to be, or if it’s already happened.

What is our memory? What is our history? How much a part of us is the landscape, and how much are we a part of it?

And if we were to collect these small moments in a notebook and save them over a period of months we would see certain trends emerge from our collection–certain voices would emerge that have been trying to speak through us. We would realize that we have been having another life altogether, one we didn’t even know was going on inside us. And maybe this otherlife is more important than the one we think of as being real–this clunky day-to-day world of furniture and noise and metal. So just maybe it is these small silent moments which are the true story-making events of our lives.

Life was charmed but without politics or religion. It was the life of children of the children of the pioneers–life after God–a life of earthly salvation on the edge of heaven. Perhaps this is the finest thing to which we may aspire, the life of peace, the blurring between dream life and real life–and yet I find myself speaking these words with a sense of doubt.

Our conversations are never easy, but as I —we–get older, we are all finding that our conversations must be spoken. A need burns inside us to share with others what we are feeling. Beyond a certain age, sincerity ceases to feel pornographic.

Somewhere, years ago, so many of us broke the link between love and sex. Once broken, it can never be fixed again.

“Thousands of years ago, a person just assumed that life for their kids would be identical to the one that they led. Now you assume that life for the next generation–hell, life next week–is going to be shockingly different than life today. When did we start thinking this way? What did we invent? Was it the telephone? The car? Why did this happen? I know there’s an answer somewhere.”

I think I am a broken person. I seriously question the road my life has taken and I endlessly rehash the compromises I have made in my life.

This is not to say my life is bad. I know it isn’t . . . but my life is not what I expected it might have been when I was younger.

I don’t consider myself political; being Canadian, American politics have only a detached appeal.

…the music was a reminder of the beauty that often accompanies destruction.

Courtesy is the password to safety.
Fame and fortune are coming your way.
Even the greatest of whales is helpless in the middle of a desert.
More Fortunes >