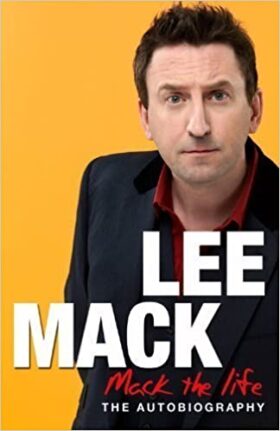 Declassified by Agent Palmer: Why I Read Lee Mack’s Mack the Life… And Why YOU Should too!

It’s hard to imagine nowadays, but there was a time, and I think my generation will be the last to grow up with this, where seeing yourself on a TV screen never happened.

But if you do want to be, or at least try to be, a comedian, then at some point you’ve got to just get up and have a go.

Writing is God’s way of punishing comedians for having one of the best jobs in the world.

…there were a lot of people making decisions. In telly there always are. It’s extremely rare for anyone, including myself, to be completely honest and say ‘I really haven’t got a clue what I’m doing here, and have no idea if this will work or not.’ Instead, people have to pretend they know the secret recipe. They have to make very assertive changes to things, which helps them ignore the unbearable truth: very often no one has a clue what will make a good show. The industry finds it very hard to admit that to itself. Instead people tend to go the opposite way and make very bullish decisions to cover their own self-doubt.

PR people’s ability to be positive in the face of adversity is heroic or deluded depending on your point of view.

There’s something very reassuringly old-fashioned about comedians being wheeled out front to distract the crowd otr a moment. It’s like we’re suddenly the least important act on the bill, and given there are times when I think comedy has possibly got just a little too big nowadays, then that’s not necessarily a bad thing. It feels like we’re outsiders in a world of bigger and better acts, and for some reason I quite like that. I like the feeling that we’re the underdogs…

The first thing I needed was a deadline. Without that I’m always stuff, as not writing is always much more fun than writing. As is watching telly. Or reading emails. Or washing conkers.

There’s always the temptation when writing to go somewhere else to do it, the idea being that if you’re somewhere different, especially if you’re abroad or somewhere beautiful in the countryside, you’ll somehow be more inspired and write better stuff. This is a lie that the brain tells you, to allow it to procrastinate. The reason why ‘somewhere else’ feels better to write is that it needs to be arranged, and arranging it is easier than writing. It’s a way of putting off the inevitable; of just having to get on with it.

…egos in showbiz are so brittle that the phrase ‘no good’ has never been said to the face of a writer or performer. Unless the conversation is about other people’s work, in which case it gets said a lot.

In my humble (right) opinion, reality is a very over-rated currency in comedy. ‘Real’ in comedy is seen as high-brow, well, certainly in comparison to the studio stuff which is seen as ‘unreal’. Yet in an art gallery it’s the other way round. Go to a Picasso exhibition and look at a picture of a horse. Then say really loudly ‘That’s crap, it looks nothing like a horse. I like my horses to look “real”.’ They’ll look at you like you’re an absolute heathen. Trust me, I know, I do it all the time.

That’s the internet for you. Never have so many known so much about so little.