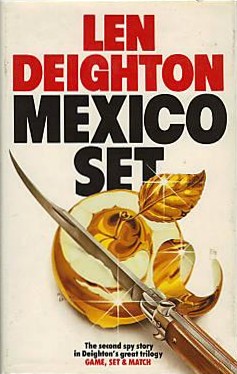 What a memory he had; I’d quite forgotten selling him that car. Maybe that’s how the rich got richer, by remembering in resentful detail every transaction they made.

“Enrolled?” It could mean a lot of things, from persuaded to defect to knocked on the head and rolled in a carpet.

“Yes,” said Dickey, “it’s really quite a place, isn’t it? Fifteen million people perched at seven thousand feet altitude with high mountaintops all around them and thick smog permanently overhead. Where else could you find a capital city with no river, no coastline, and such lousy roads? And yet this is one of the oldest cities the world has ever known. If that doesn’t prove that the human race is stone raving mad, nothing will.”

“Let’s see how the cookie crumbles,” said Dicky. It was an old advertising expression that meant put your head in the sand, your ass in the air, and wait for the explosion.

And like so many poor people she had only contempt for socialism in any of its various forms, for it is only the rich and guilty who can afford the subtle delights of egalitarian philosophies.

He was suspicious, just as I would have been in his place. There could be no half measures. I would have to work very hard to land this one. He was like me–too damned old and too damned cynical–to fall for anything but innocent sincerity or a cynicism even more profound than his own.

“It’s the game,” said Werner. He too was slumped back against the wall with a plastic cup of warm weak coffee in his hand. “It’s nothing to do with virtue and evil, or effort and reward, it’s just a game. You know that, Bernie.”

“It’s human, isn’t it? We all think we’re important enough for anything.”

“I was having this wonderful dream, Bret. I dreamed I was working for this nice man who couldn’t tell the time.”

“Sex is like crime. Only one percent motivation and ninety-nine percent opportunity.”

For fear is so unwelcome that it comes only in disguise, and guilt is its favorite one.

Street gutters overflowing with rainwater reflected the street lamps and made a line of moons that were continually shattered by passing traffic.

Good old Bernard, always has time to help his fellow humans no matter what threatens. Or was I just trying to convince myself?

“But one at a time, Bernard, old friend. Don’t antagonize a whole roomful of people all at once. It’s a dangerous sport, old lad. They get together when they have something in common. Just one at a time in future. Right?”

“On the other hand, I exposed him to temptation, didn’t I? I invited him to a house with such valuable things on show. I” have to bear some measure of guilt. I told the police constable that.”
“What did he say?”
“He said he couldn’t get into a discussion about ethics and morality, he had quite enough trouble trying to understand the law.”

“Life is difficult, isn’t it? You have to risk what you need to get what you want.”

I went over to the air conditioner. I held my hand in front of the outlet, but the air was still not much cooled. “It makes a lot of noise but doesn’t work very well,” explained Werner. “The Mexicans call them ‘politicians.’”

Amateurs keep their eyes on the target instead of looking over their shoulder.

“It’s fantastic the things some people do for a living,” said Stinnes.

The path of life shall lead upwards for you.
Your moods signal a period of change.
You are interested in higher education, whether material or spiritual.
More Fortunes >