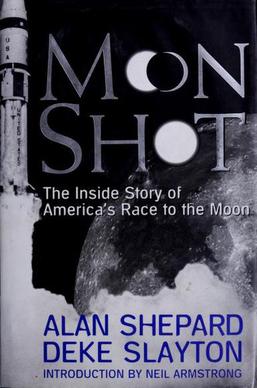 Tagline: The Inside Story of America’s Race to the Moon

Synopsis: Two former Mercury Seven astronauts; Shepard and Slayton, tell the story and detail the drama behind the race to the Moon between two world superpowers, and of the risks, rewards, and what it means to history.

Declassified by Agent Palmer: Space Race chronicled in “Moon Shot” nothing short of an ambitious tale

“The United States had no ballistic missile program worth mentioning between 1945 and 1951,” von Braun complained years later. “Those six years during which the Russians obviously laid the groundwork for their large rocket program are irretrievably lost.”

“This is for you,” his flight surgeon said, handing him a box of children’s crayons.
“Just so you’ll have something to do up there,” Douglas said.

Atmosphere was something far below him. No rush of wind despite so many thousands of miles an hour. No friction. No turbulence. It should have been the silence of ghosts.
But the ghosts were real, and they made their own sounds. It was the murmur of Freedom Seven, as though a brook were running mechanically through its structure. Inverters moaned, gyroscopes whirred, cooling fans had their own sound, cameras hummed, the radios crackled and emitted their tones before and after conversational exchanges. The sounds flowed together, some dulled, others sharper–a miniature mechanical orchestral chorus. Shepard smiled. He was hearing the Concert of the Spacecraft, a strange and unexpected company to remain with him as he hurtled through the soundlessness of space. Those sounds are most welcome, he told himself. They mean things are working, doing, pushing, and repeating. They were the new age sounds of life.

“It’s like being a bit paranoid, I guess. You keep looking over your shoulder to be sure they’re not gaining on you. But you never forget to look ahead.”

A touch of humor is always a fitting end to a cliffhanger. It was best expressed by the Grumman Aircraft Company, which had produced the lunar module.
Grumman sent a bull for more than four hundred thousand dollars to North American Rockwell, a “towing fee” for dragging the command and service modules through space for a distance of more than three hundred thousand miles.
A single message came from the public at large: Well done!

“How much bigger this monster is . . .” he thought, not even certain he had spoken the words aloud. But the sight was staggering. The Saturn V loomed nearly five times taller than the Redstone, and Alan reminded himself it also was a hundred times more powerful. Even the escape rocket atop his Apollo spacecraft had twice the power of the Redstone booster.

It all condensed into this one single, long look at fragile, beautiful earth, as though he were sent here, he and the others, so they might look back at that lovely, sensitive sphere and then carry home the message that everyone there must learn to live on this planet together. It didn’t matter who liked whom, or on what side a man might find himself, because they were all on the side of a world of very definite finite resources, and they would all suffer terrifying consequences if they drained to bare bones the world that had conceived the life of the human race, fostered and nurtured that life, which not threatened to contaminate and destroy–

Deke Slayton, Tom Stafford, and Vance Brand, and the two Soviet cosmonauts had demonstrated that all terrestrial boundaries were artificial, invisible, and meaningless from 140 miles high, that one flight could point the way to a safe and sane future.

Today it’s okay to make a few choices by going with your instincts.
Fame and fortune are coming your way.
The path of life shall lead upwards for you.
More Fortunes >