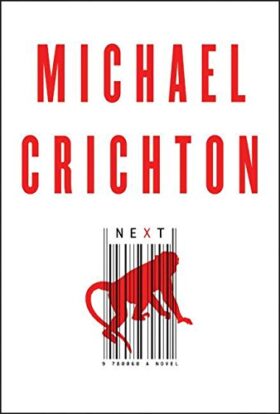 Synopsis: Welcome to our genetic world. Fast, furious, and out of control.This is not the world of the future—it’s the world right now.

Declassified by Agent Palmer: Crichton’s Next is a TED Talk with a novel preamble

This novel is fiction, except for the parts that aren’t.

The word “cause” is an altar to an unknown god.
-William James

What is not possible is not to choose.
-Jean-Paul Sartre

Perils of “Media Hype”
“What lessons can be drawn from this?” asked Professor McKeown. “First, in a media-saturated world, persistent hype lends unwarranted credulity to the wildest claims. For years the media have touted stem cell research as the coming miracle. So when somebody announced that the miracle had arrived, he was believed. Does that imply there is a danger in media hype? You bet. Because not only does it raise cruel hopes among the ill, it affects scientists, too. They start to believe the miracle is around the corner–even though they should know better.

Science is as corruptible a human activity as any other. Its practitioners aren’t saints, they’re human beings, and they do what human beings do–lie, cheat, steal from one another, sue, hide data, fake data, overstate their own importance, and denigrate opposing views unfairly. That’s human nature. It isn’t going to change.

Recently, he had started to define himself as an artist, and artists did not need formal training. In fact, formal education interfered with the artist’s ability to feel the zeitgeist, to ride the waves of change rolling through society, and to formulate a response to them.

It was the job of art to bring true feelings alive. To shock people into awareness. That was why so many young artists were using genetic techniques and living material to create art.

If you believe the adults around you are acting like children, you’re probably right. In technical terms, it is called “psychological neoteny,” the persistence of childhood behavior into adulthood. And it’s on the rise.

Kumnick observes that since adulthood in human beings is being replaced by permanent adolescence, people naturally wish to be accompanied through life by similarly youthful dogs. “Like Peter Pan, we never want to grow up,” she says. “Genetics makes it possible!”

Yet gross bias remains far too common in medicine, and in certain other areas of high-stakes science as well.

At the end of my research for this book, I arrived at the following conclusions

The path of life shall lead upwards for you.
Let’s finish this up now, someone is waiting for you on that.
Even the greatest of whales is helpless in the middle of a desert.
More Fortunes >