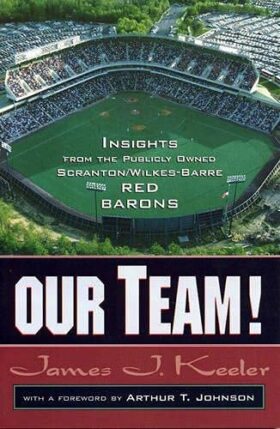 Synopsis: Our Team! explores public ownership of sports franchises as a strategy for elected officials to increase the value of the place. James J. Keeler examines the successful case of the Scranton/Wilkes-Barre Red Barons, which has produced a fair return on the taxpayers’ investment.

Declassified by Agent Palmer: Field of Red Tape: ‘Our Team’ is a fantastic study of stadium ownership through the lens of the SWB Red Barons

More than 200 communities in the United States and Canada host National Association and independent league teams. James Keeler’s book provides a unique view into how one community built a minor league stadium and obtained a team. His case study is unique for several reasons. There is no study of a community’s pursuit of minor league baseball as detailed as Keeler’s; no studies have been written by a participant who can claim the objectivity of an academic observer that Keeler does; and Keeler’s is the first to attempt to describe how a community comes to own and operate a professional baseball team.

Policy entrepreneurs are visionaries. They create a vision of “what can be” that is significantly different from “that which has normally been.”

…to this day economic decline threatens many families in Northeastern Pennsylvania with a type of fear surpassed only by the fear of sickness and death itself.

Tambur told me: “I felt a AAA team would give us a better attitude about ourselves. That was important. We needed more pride in Northeastern Pennsylvania.

When I asked Corcoran if he could relate to John J. Kirlin’s theory that the primary function of government is to increase the value of place, he answered spontaneously: “Yes, absolutely. In a nutshell, that’s my job. I like that. I’m going to use it to describe what I do.”

Even a broken clock is right two times a day.
Your moods signal a period of change.
Fame and fortune are coming your way.
More Fortunes >