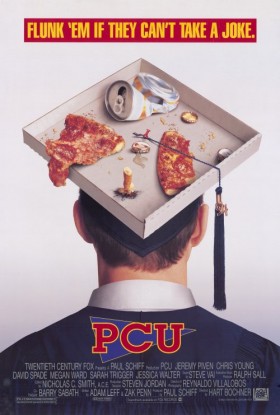 Synopsis: A high school senior visits college for the weekend, and stays at the wildest house on campus in this classic tale of anti-political-correctness.

Declassified by Agent Palmer: PCU at 21: The More Things Change, The More They Stay the Same

President Garcia-Thompson: You passed out cigarettes for a smoke-a-thon on Earth Day. You installed speed bumps on the handicapped ramps and, most recently, you dumped 100 pounds of… MEAT on a peaceful vegan protest!
Droz: Oh, come on! That was way more than 100 pounds.

Droz: Ok, now it’s true, the majority of students today are so cravenly PC, they wouldn’t know a good time if it was sitting on their face, but there’s one thing that will always unite us and them. They’re young. They may not realize it yet. They’ve got the same raging hormones, the same self-destructive desire to get boldly trashed and wildly out of control. Look out that window! That’s not a protest! That is cry for help! They’re begging us… Please have a party! Feed us drinks! Get us laid! Aahhhhhh!

Droz: What’s this? You’re wearing the shirt of the band you’re going to see? Don’t be that guy.

Katy: Hey, Droz, how ’bout this: Tonight, at the Pit, “Everyone Gets Laid.”
Droz: It’s tasteless, disgusting, and offensive. I love it.

Droz: Want some advice?
Tom: Well, yeah.
Droz: Well, here’s all you need to know. Classes: nothing before eleven. Beer: it’s your best friend, you drink a lot. Women? You’re a freshman, so it’s pretty much out of the question. Will you have a car?
Tom: Uh, no.
Droz: Someone on your floor will. Find them and make friends with them on the first day.

Droz: Pigman is trying to prove the Caine-Hackman theory. No matter what time it is, 24 hours a day, you can find a Michael Caine or Gene Hackman movie playing on TV.

Droz: Here’s the deal. You gotta get all this 50’s cornball shit out of your head. It’s a whole new ball game on campus these days, and they call it P.C. Politically correct. If you don’t watch yourself, you can get in a butt-load of trouble… These, Tom, are your cause-heads. They find a world-threatening issue and stick with it… for about a week.

Droz: Ladies and gentlemen, I think it’s time to revive an ancient tradition we seem to have long forgotten.
Cecilia: They confiscated the altar, Droz.
Droz: No, I’m not talking about human sacrifice, Ceel. I’m talking about something we used to do every Saturday night as a matter of principle. Here’s a hint. Legions of hand-stamped meatheads… in coed naked lacrosse T-shirts… power-chugging watered-down Meisterchau… regurgitating on the glue-matted floors.
Mullaney: Kiln-like temperatures, fights with townies… lines of drunken people waiting for the bathroom.
Katy: Wait a second. You guys are talking about a party.
Droz: Ding-ding-ding. Gutter, tell her what’s she’s won.

Droz: I don’t have a lot of time to say this but I gotta get something off my chest. Last night, my house threw a party… and I thought that we all finally got along. We had a good time. But we got so many protests, we broke so many rules… that we got booted off campus. You know, it used to be the administration’s job to make rules. It used to be us against them. Now it’s us against us. I’ve been here seven years and I gotta tell you guys… what’s going on here is about America. It’s about democracy. It’s about the Bill of Rights, basic cable, call-waiting, free trips to the salad bar. It’s about everything that makes this country great. Our country! We can do something about this. We can finally say… that when some people are having a good time… and drinking some beers, throwing some meat… that we’re not gonna protest. In fact, I promised myself I wouldn’t do this. I’m sorry. If we could just say that, if only to each other… just this one time… that we’re not gonna protest. That we’re not gonna protest?

Rand: I scheme for months and it all gets screwed up because you can’t control the students! Never send a woman to do a man’s job!

Droz: Sanskrit? You are majoring in a 5000 year old dead language?

Pigman: “A Bridge Too Far.” Caine and Hackman in the same movie. This is my thesis man! This is my closing argument! I CAN STOP WATCHING TV!

Droz: Yes! That’s the beauty of college these days, Tommy! You can major in Game Boy if you know how to bullshit.

Fame and fortune are coming your way.
Things are turning for the bright side.
The path of life shall lead upwards for you.
More Fortunes >